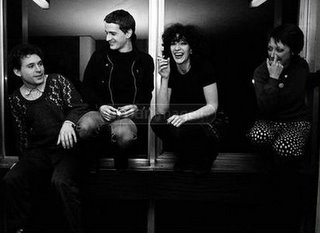 George Bush's recent claim that "We do not torture," reminded me of the Au Pairs' great punk song, "Armagh," off their 1981 album Playing with a Different Sex. The song needs to be revived or covered by Steve Earle or someone needs to write a new song called "Gitmo" or "Abu G." (The Au Pairs song was about British torture of suspected IRA members in Northern Ireland.) Here are "Armagh"'s lyrics:

We don't torture, we're a civilized nation
We're avoiding any confontation
We don't torture, we don't torture
American hostages in Iran
Heard daily on the news
Forget about Vietnam
You can ignore the 32
There are 32 women in Armagh jail
Political prisoners here at home
The British state's got nothing to lose
It's a subject better left alone
We don't torture
We're a civilized nation
We're avoiding any confrontation
We don't torture
Alleged crimes withheld information
She gets no sanitation
Dries her shit on her cell wall
Feeling cold and sick
She gets a couple of valium
Now she's relaxed for the next interrogation
Naked spreadeagled on her back
It's a better position for internal examination
It's a better position for giving information
An armed guard squad she gets a beating
bleeding and wounded she's stopped eating
Has a baby gets nothing for pain
They came and took her baby away

great "au pairs"!
you have remembered me the first time I heard that song, in a rainy winter afternoon. I was only fourteen...
it was shocking read the lyrics!
thanks for the "remind".