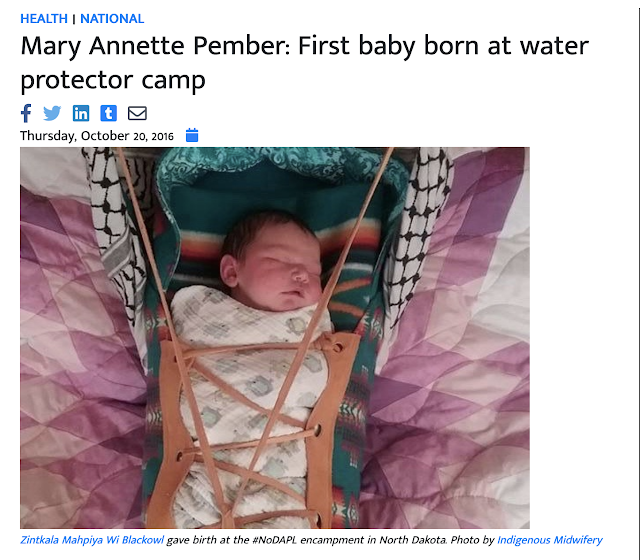 From 2016, but still relevant. Thanks to E for this. Here's the story:

The #NoDAPL movement is doing more than bringing people from all walks of life together, it's helping to usher in new ones. Independent journalist Mary Annette Pember reports on the birth of the first baby at the water protector camps in North Dakota:

For Zintkala Mahpiya Wi Blackowl, Sky Bird Woman, the birth of her baby girl at one of the water protector camps in North Dakota was the ultimate act of resistance. Baby, as yet unnamed, was born early in the morning in a tipi on October 12 directly into her mother’s arms as their family slept nearby. The family’s tipi is pitched alongside the Cannonball River. Baby is healthy and thriving. Blackowl plans to take her to Indian Health Service this week for a well-baby check-up. “I birthed her by myself,” said Blackowl, of the Sicangu and Ihanktonwan Lakota tribes. Although her husband and family were sleeping in the same tipi, the birth was a private event. In the traditional Lakota way, the mother gives birth alone. “That space in which we give birth is so holy,” she said. “At one time our people realized that.”

The source is here.

Posted by Ted Swedenburg at 9:30 AM No comments: