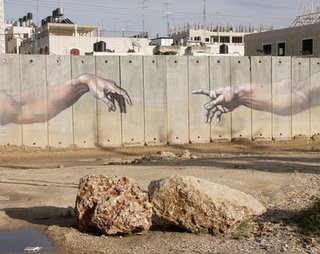 Sen. Hillary, a member of the Senate Armed Services Committee, is off to visit Israel next week, to meet with PM Sharon and deputy PM Peres. The purpose, says the New York Times, is "to discuss American-Israeli relations, in a trip that may help her strengthen her support among Jews in New York as she faces re-election next year." As a taxpayer, I'm glad that I can help out with this important project. Hillary will "reiterate her condemnation of remarks made by President Mahmoud Ahmadinejad of Iran calling for the destruction of Israel." Isn't that brave of her? And she will visit a portion of the "security fence" (a.k.a. separation barrier, a.k.a. apartheid wall) Israel is constructing in the West Bank, a move that she supports.

Meanwhile, an art exhibition in protest of the separation barrier, called Three Cities Against the Wall, opens this month simultaneously in three cities: Ramallah, Tel Aviv, and New York. The photo above is a painting by Suleiman Mansour, one of the Palestinian organizers of the exhibit. Maybe when Hillary's in Israel she could drop by the Beit Ha'omanim gallery in Tel Aviv, or after her visit to the wall she could check out the Al-Hallaj Gallery in Ramallah. And when she's back in NYC, she could drop by ABC No Rio at 638 East 6th Street.

The press release for the exhibit reminds us:

The Separation Wall was found to be illegal by an advisory opinion given by the International Court of Justice (ICJ) at The Hague on July 9, 2004. In its ruling, the ICJ stated: "The construction of the wall being built by Israel, the occupying power, in the Occupied Palestinian Territory, including in and around East Jerusalem, and its associated regime, [is] contrary to international law."