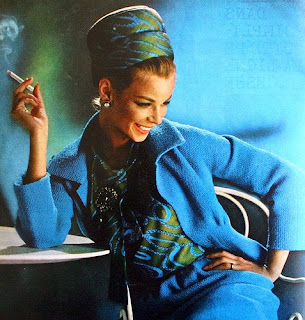 Anne de Zogheb in ensemble by Pierre Balmain, Marie Claire, March 1963
Anne de Zogheb was a top international fashion model in the late 50's and early 60's, gracing covers of fashion mags in the US and France. She married pop singer and teen idol Paul Anka -- who is of Lebanese descent -- in 1963, and stopped modeling after her second child was born. Part of her upbringing took place in Alexandria. Her father, Count Charles de Zogheb (d. 2006), who became a Lebanese diplomat, was a member of Alexandria's illustrious Levantine de Zogheb clan. The de Zoghebs were Christian Syrian-Lebanese, who migrated to Alexandria during the era of French occupation (1798-1801), served consuls for various European powers (I believe that they were entered into the rank of the nobility by Austria-Hungary), and became fabulously wealthy (for a time) from the cotton trade. They were major figures in the social life of colonial-cosmopolitan Alexandria.
Hala Halim has written some very important work about the remarkable Bernard de Zogheb, the last of the family in Alexandria (the rest of them left in the 50s and 60s) and in particular, his fascinating operettas. I highly recommend a read. Perhaps I will post something on them in future.
I've not been able to determine the exact kinship relationship of Charles and Bernard, nor do I know how long Paul's now ex-wife Anne lived in Alexandria.
I hope in future to post something about other famous Alexandrians, like Eric Hobsbawm, Ungaretti, Marinetti and others.
Posted by Ted Swedenburg at 1:21 PM No comments: 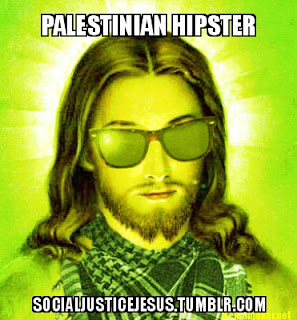 See previous post for a somewhat different use of the same image. This one, courtesy socialjusticejesus.tumblr.com.
Posted by Ted Swedenburg at 7:43 AM No comments:

Robin just informed me about this website, Hipster or Jesus? It solicits your offerings. Its logo is this: 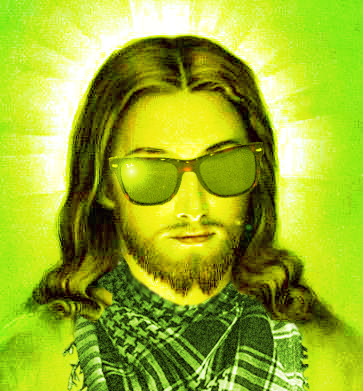 I'm no expert on hipsters, although I've devoted a fair amount of time to reading about them. I thought hipsters mostly made fun of longhairs. But I must admit, the layers of hipster irony are often so thick that I am unable to grasp the target of hipster humor. Or maybe this is making fun of hipsters. Who the frack knows?

Of course these images of Jesus (imagined and real) of course trade on the "old" Caucasian images of Jesus that someone like me was raised on, and that were much critiqued in the civil rights era and by the Black Power movement and so on. But hipster is largely a white phenom, so...

As of today, there are 7 pages of images of hipster/Jesus, and only this one is wearing a kufiya. (It's his headgear. The image is a little clearer if you consult the original.) 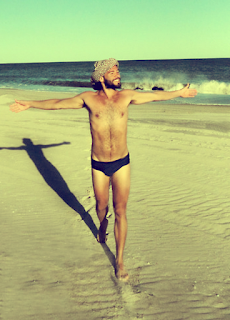 This after "Border Police forces dispersed the rally [yesterday] by throwing stun grenades, shooting tear gas, and spraying “skunk” liquid." The protest was against the 18 year closing of Hebron's downtown Shuhada Street, which is open only to Israeli settlers. Read about it here.

Here are some protesters, presumably before they soaked their kufiyas with lemon juice. 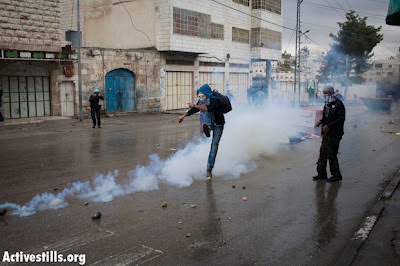 Posted by Ted Swedenburg at 9:27 AM No comments:

It's a stretch...Khaled and others

I'm sure you've noticed this, the seemingly unstoppable tendency of anyone writing about World Music to compare artists who are relatively unknown in the West to Western artists, with the aim of helping Western readers make sense of said artists. The results are frequently ridiculous, but that doesn't stop anyone.

The Supine View From the ARChive's Chesterfield, the blog of the ARChive of Contemporary Music, has provided an invaluable list of whoppers. Here are the relevant ones that deal with Middle Eastern artists.

“She has been called the Bessie Smith of Egypt, and for stark passion she was all of that.” - …about Umm Kulthum. All Music Guide, John Storm Roberts, p. 855

“The two-stringed rabbabah assaults the senses with ear-fluttering twills as the djallabiyah-dressed, handlebar-moustachioed trio – “Hendrix of the East” : Metqal Qenawi Metqal, Shamandi Tewfiq Metqal and Yussef ‘ali Bakash – sing of nomadic exploits and tales seemingly straight from the pages of ‘A Thousand and One Nights’”. - …about the pricipal performers in Les Musiciens Du Nil (Musician of the Nile) in the Realworld press kit for Charcoal Gypsies.

“Rachid el Baba…- he likens himself to an Algerian Jean Michel Jarre – built a studio in Tlemcen and began recording many of Rai’s top stars.” - about top rai producer Rachid by Martin Johnson, Pulse! “Do the Rai Thing” Nov, 1989, p. 50

“… the famous Tunisian singer, Saliha (and if you are not yet familiar with this “Umm Kulthum of Tunisia,” find a recording of her soon) …” - Middle East Studies Association Bulletin, July 1995 by Dwight Reynolds

“A kind of Arab Jim Morrison, he irritates and unsettles the authorities, at the same time seducing the masses and the intellectuals.” - …about Cheb Khaled, Intuition Records press kit, 8/89

“Kazem al Sahir is The Iraqi Elvis . Here he is singing ‘We Want Peace’ with Lenny Kravitz” - http://growabrain.typepad.com/growabrain/music_from_the_middle_east/, 7/24/2004

“For devotees of North African music, Hakim needs no introductions, but he received several anyway, with fanfare befitting a star nicknamed the Lion of Egypt, at Central Park SummerStage on Saturday. He was called the “king of shaabi music,” referring to his rhythmic street pop.” - “Enter Egyptian Pop Star, Blowing Kisses and Swiveling Hips: Hakim in Central Park” by Sia Michel, NYTimes – July 10, 2006
Posted by Ted Swedenburg at 10:59 AM 2 comments:

I got this via today's New York Times. This was filmed yesterday in the Halfaya neighborhood of Hama. Apparently this is a regular, morning event. 100's gather to dance the debke, as someone chants and the crowd responds, to the backing of live percussion. Pretty stirring.

You will recall that Hama is famous for its revolutionary debke chants. It is the source of that famous chant,  "Come On Bashar, Leave," sung by Ibrahim Qashoush, who shortly after a video of him chanting at a demonstration circulated widely, was found with his throat slit, on July 4. I posted about it here. The recently-departed Anthony Shadid, the intrepid journalist for the Times, got into Hama in July 2011 and reported on the song, the song's author, and conditions in Hama.

It's cheering to see that, despite the deadly assaults by the regime, Hama is still at it. I hope that someone can fill the shoes of Anthony Shadid. I don't know whether I'm more pessimistic about that or about the future of Syria.

(The expert on Syrian debke is Shayna Silverstein, graduate of the University of Chicago. I look forward with keen anticipation to her publications on the subject.)
Posted by Ted Swedenburg at 5:28 PM No comments:

Posted by Ted Swedenburg at 7:57 AM No comments: 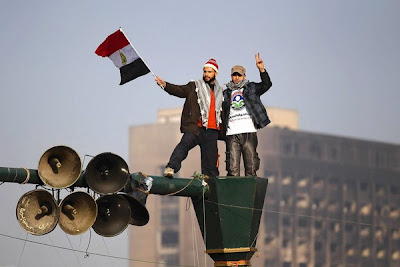 Demonstrators atop post at Tahrir Square, marking 1st anniversary of the launch of
the Egyptian revolution, January 25, 2012 (Jeff J. Mitchell / Getty Images).
Yes, I know this is a bit late. I'm not paid to do this. Sometimes I fail to keep it up to date. This is for the record. (Photo is from an article in the LA Times, Jan. 26.)
Posted by Ted Swedenburg at 11:01 AM No comments:

Today (February 14) marks the first anniversary of the Bahraini uprising. Although crushed by Bahraini security forces, with the support of Saudi Arabia, and the quiet connivance of the US administration, Bahraini pro-democracy forces continue to protest and to organize and to fight for freedom.

Here's a video showing marchers in Manama, Bahrain, yesterday, heading to Pearl (Lu'lu') Square. Anticipating a confrontation with security forces, they put on their gas masks. And some, including Nabil Rajab, a prominent human rights activist, put a kufiya over the gas mask. 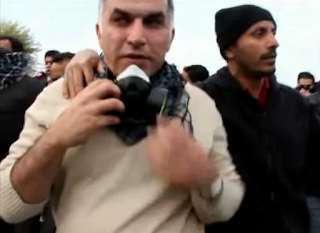 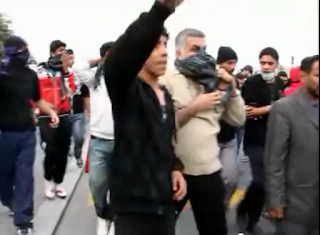 and then the kufiya
(If you watch the vid you'll notice that others do the same.)

The new face gear for the Arab revolts: kufiya over gas mask.

(I got this from the New York Times, from a piece by Robert Mackey on the Times blog, The Lede.)
Posted by Ted Swedenburg at 9:12 AM No comments:

In this mindblowing article about the US prison system, from n+1.

"In gentrifying sections of Brooklyn, for example, steep drops in crime, combined with the virtual depopulation of entire city blocks, has underwritten a real estate boom. In neighborhoods like Fort Greene and Clinton Hill, wealthy people with children have reaped the benefits of climbing land values from apartments they never would have bought had it not been for the removal of tens of thousands of locals from adjacent areas. Neighborhoods like Bedford-Stuyvesant show the population exchange in its purest form. As African American Brooklynites are exported upstate for involvement in petty drug crimes, twenty-somethings reared in prison towns migrate south and reoccupy the same areas vacated by prisoners. Often, of course, the new inhabitants proceed to consume and sell the very same drugs that got the previous tenants into trouble. Since they’re white, they do so with impunity."
Posted by Ted Swedenburg at 11:58 AM No comments: 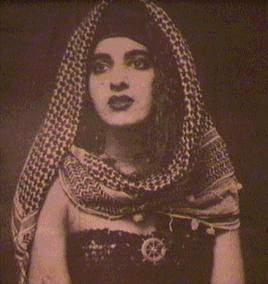 The photo is of Dana as a drag queen, from the period when Yaron started out, in early 1992, performing in clubs in Eilat and Tel Aviv, on revues organized by Ofer Nisim. She became famous during this period doing a send-up of the Whitney Houston song, "My Name Is Not Susan." Yaron pretended to be Whitney Houston, performing in Saudi Arabia, and singing verses (from Whitney's song) in English as well as verses made up by Dana, sung in Arabic. The song was called "Sa'ida Sultana" (in it Dana shouts, "My Name Is Not Sa'ida!"). This song was subsequently recorded and became Dana International's first hit. A couple years later, it was a sensation in Egypt, on a bootleg cassette.

Who knows what song(s) she performed while wearing kufiya.

A video of Dana (backed by Ofer Nisim) doing "Sa'ida Sultana" is now available on youtube.

And Geir Skogseth has made the lyrics to the song (complete with a translation of the lyrics) available here. The lyrics on the video vary a bit from the recording, which Geir has transcribed. In the vid, for instance, she sings, "Ana 'ismi Whitney Houston" (My name is Whitney Houston) rather than "Ana 'ismi Solli Sa'dun."
Posted by Ted Swedenburg at 9:02 PM No comments:

The New York Times reports on Sunday's clashes. More walls go up near Interior Ministry. And kufiyas are still in evidence. 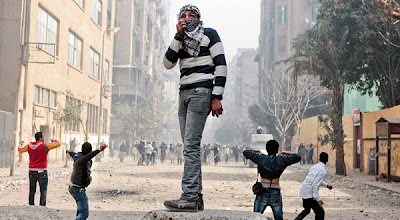 Moises Saman, New York Times
Posted by Ted Swedenburg at 8:22 AM No comments:

Source: Egypt Independent.
Posted by Ted Swedenburg at 10:16 AM No comments:

Kazeboon: The junta are liars

Posted by Ted Swedenburg at 4:35 PM No comments: