Posted by Ted Swedenburg at 5:11 PM No comments: 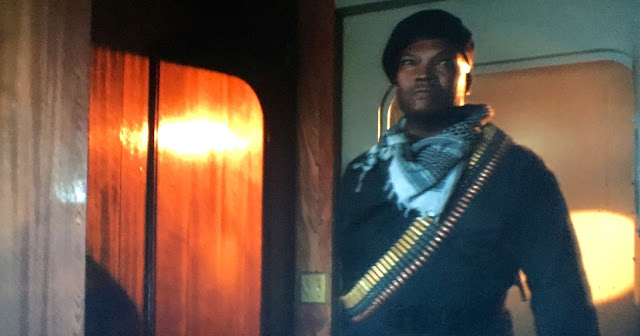 Fish Mooney is trying to flee Gotham by boat. The boat is attacked by mercenaries, and this guy enters her cabin to get her. In the next episode, she wakes up in what turns out to be a prison run by a doctor who is harvesting organs, as well as limbs, and not just selling them but conducting his own terrifying and sadistic experiments on the inmates. Lots of truly horrific things happen in Gotham, but the Dollmaker (Dr. Dulmacher) might rank as the worst, his projects evoking the most awful practices of the Nazi concentration camps. Naturally, I guess, by a kind of unconscious Orientalist logic, the mercenary sent to grab Mooney would be in a kufiya. It's the only one I've spotted, after watching the entire first season of Gotham and the first two episodes of the second. But I'll keep looking!
Posted by Ted Swedenburg at 12:38 PM 2 comments:

I wrote about Belkacem Bouteldja in my very long post on the origins of pop-rai. Bouteldja was, of course one of the pioneers. His first recording, released in 1965 when the lad was thirteen years old, was a cover of a 1957 recording by Cheikha El Ouachma, from Aïn Témouchent, called "Gatlek Zizia."

Another of Cheikha El Ouachma's well-known songs was "Sid El Hakem" (His honor the judge). According to Bouziane Daoudi (Le rai, 2000), the lyrics evoke the ordinary Algerians' everyday experience of military repression during wartime.

I've just come across Belkacem Bouteldja's cover of "Sid El Hakem," courtesy the latest broadcast (#26) of Toukadime Radio. (Read more about Toukadime here.) It's the first track, check it out, it really kicks. Then compare it to Cheikha El Ouachma's original. Comparing the versions, you'll get a sense of how Bouteldja (and whoever else was involved in the production) was taking the music of the cheikhat in the direction of what, eventually, less than a decade later, became known as pop-rai. Bouteldja recorded another, much more modern, version of "Sid El Hakem," with his collaborator Messaoud Bellemou, probably in the 1980s.

I also recently came across a photo of the cover of an early Bouteldja release, "Milouda Ouine Kounti," from the mid-sixties. Note that it was advertised as "Chant Folklorique Oranais." It's a cover of a song originally done by Cheikh El-Younsi Berkani. Listen here. 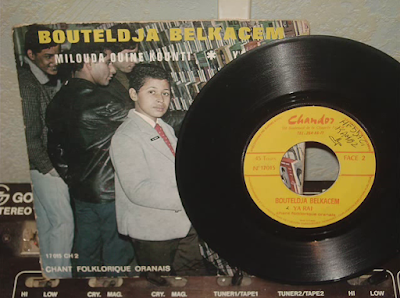 While looking around at YouTube vids of Belkacem, I only just now discovered that this giant, this pioneer of rai, passed away in early September.  Of cancer, in poverty. He had complained in the previous month to the Algerian daily El Watan: "je suis seul, sans ressource. Je n'ai ni retraite, ni pension, ni assurance, ni couverture sociale". Although he was well known as one of the pioneers of the now world-famous genre of rai, he never benefited financially. He complained of this in an earlier interview with El Watan in 2009. What a crime that the Algerian state, which puts on big annual festivals to celebrate rai (held, since 2008, in Sidi Bel-Abbès), did nothing to provide this great artist a pension. Read an obit here, in Nouvel Obs. Allah yarhamou.

Finally, check out this kicking track, from 1976, which Belkacem recorded with the troupe of Messaoud Bellemou, one of the recordings from the mid-seventies that defined "pop-rai."