My review of Reem Kelani's Live at the Tabernacle for RootsWorld

Just published. Read it here. And my advice to you: buy the album! 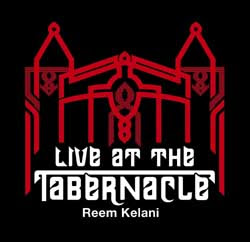 Posted by Ted Swedenburg at 7:48 PM No comments:

I've not yet seen Star Trek Beyond but I plan to. Safia Boutella, who plays the alien scavenger Jaylah, has received quite good reviews. 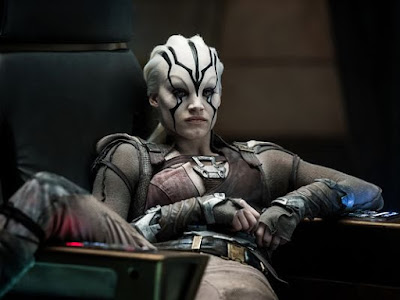 Safia Boutella, born in Bab El Oued, Algiers, is an Algerian dancer and actress. You can read about the high points of her career here. 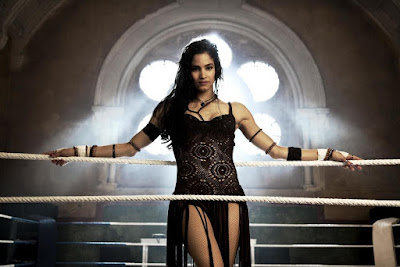 She is the daughter of Algerian jazz musician Safy Boutella, who is best known to me due to the fact that he co-produced with Martin Meissonier, and and collaborated on, Cheb Khaled's great 1988 album Kutché. (He's shown on the cover reclining in a chair.) I have a longer post where I explain the context in which this album -- the first Khaled album produced in France -- is made, but briefly, the story is that members of the liberal wing of the Algerian government paid for its production and sent Khaled to France to produce it. It was not a major seller but it is the prelude to Khaled's 1992 breakthrough with "Didi" and the album Khaled. 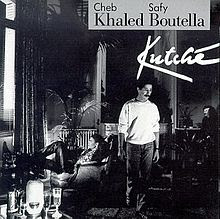 Safia has worked with Spanish choreographer Blanca Li (born Blanca Gutierrez) since age 17 (she is now 34). 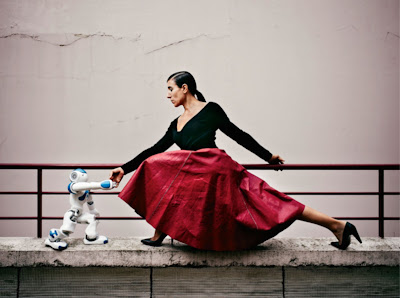 It was Bianca Li who recruited Gnawa musician Hassan Hakmoun in 1986 to appear in a collaboration called Trio Gna & Nomadas, a "fusion" project involving a Gnawa group (including Hakmoun) and a Spanish dance group (flamenco, modern) led by Bianca's partner Etienne Li, and in which she danced. You can see a video here, with a number of photos. Trio Gna & Nomadas traveled to the US in 1987, and Hakmoun stayed, in New York, where he has been ever since. He put out his terrific first album, Gift of the Gnawa in 1992. And he performed together with Adam Rudolph at the MESA meetings in San Antonio in November 1991, which is when I first became familiar with him. 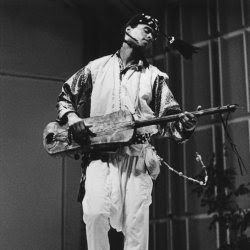 So, the connections: Star Trek - Khaled - Hassan Hakmoun. There you have it.

Back in late May, I reviewed Spain-based Sahrawi singer Aziza Brahim's fourth album, Abbar el Hamada, for RootsWorld. Read it here. And check out "Calles de Dajla," from the album, below.

Posted by Ted Swedenburg at 1:38 PM No comments:


Ok, so I'm behind on posting...this is from 4 months ago, sorry! In any case, it's an excellent one from France's DJ No Breakfast, great fun, and it gives a sense of the great variety and clever mixing going on today in the mahraganat and hip hop scenes in Egypt. I really like what Abyusif is up to on the mahraganat front, and Satti is very cool too -- categorized as rap, I guess. The songlist is to be found here.

Here are a couple fine photos I found awhile back of the mahraganat scene -- I can't remember the source. If anyone knows let me know, it's important to give credit.

I've now found the source for the top one: it's from CBS News, a wonderful portfolio of photos of the mahraganat scene. This is from a concert in April 2013. 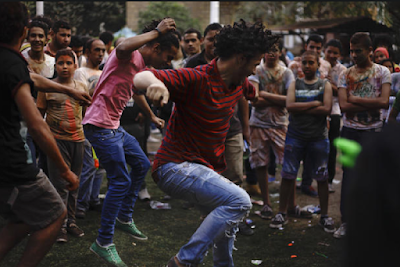 This one is from the Manchester Guardian, "The World in Pictures," Jan. 2, 2014. It's a bachelor party with mahraganat music in El Marg, a large and very populous informal district on the northeastern edge of Greater Cairo. 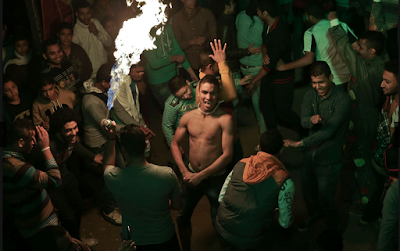 Posted by Ted Swedenburg at 6:18 PM No comments:

"get to know what fadoul sounded like when he was playing around with rapping, disco from egypt, coladera from algeria, an arabic take on zouk music and much more. it also includes 2 tracks from egypts al massrieen which will be the next reissue on habibi funk."

This is all the information provided by Jannis of Jakarta Record (based in Berlin and Cologne), so, alas, no track list. But it is a sweet list.

MTV documentary on Egyptian 'rebel music,' the massive June 30, 2013 demonstrations against Morsi, and the aftermath

This is a quite interesting documentary, from MTV, about the period running up to the Tamarrod-organized demonstration of June 30, 2013, and the role of musicians in that movement. Ramy Essam, Karim Adel Eissa of the rap group Arabian Knightz, and Nariman El Bakry, a music promoter, are all strong supporters of Tamarrod and critics of Morsi and the Muslim Brotherhood. After the coup, Karim Adel Eissa expresses support the army, who he says he did not support previously. [Addendum from just a couple hours after this was posted. I posted more or less the same thing on FB. A FB re-posted, and within minutes a comment from Karim Adel Eissa, who says, "my stand openly and publicly changed shortly after that tho."] Nariman seems to shut down emotionally. Ramy got alienated by the crowds expressing support for the army at an event the night before the June 30, and so did not play at the June 30 demo. He says he was glad that Morsi got tossed out but not with the coup.

Good resource that is not always terribly accurate -- claims that 33 million Egyptians demonstrated against Morsi on June 30. Its estimate of 1200 killed in the Rabaa massacre of Muslim Brotherhood supporters on August 14 is more sound. Human Rights Watch estimates at least one thousand.

Posted by Ted Swedenburg at 1:11 PM No comments: