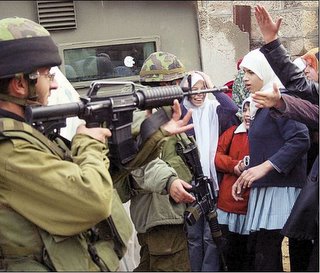 Occasionally, we are permitted a view of the everyday reality of the Israeli occupation in the West Bank, now in its THIRTY-NINTH year. This AP photo appeared today on the front page of our local paper, the Arkansas Democrat-Gazette, with the caption, "Israeli soldiers stop Palestinian schoolgirls during a scuffle Tuesday in the West Bank town of Hebron before tear gas was fired to disperse the crowd." The message of the photo itself, of course, is much more powerful than the caption.

This photo also reminds me of summer 1993 which I spent in Ramallah with my family. I remember walking with my wife and son, who at the time was five years old, from downtown Ramallah (the Manarah), where we did our shopping, to the Batn al-Hawa district, where we were staying in a friend's apartment. On our way we always passed by the Ramallah bus station. On the roof of a tall apartment building that overlooked the bus station there was an Israeli military post from which soldiers kept watch on the goings-on below. I recall, on more than one occasion, spotting an Israeli sniper, beading his gun on my five year old son.

Tags: Palestine, Israel
Posted by Ted Swedenburg at 11:34 AM