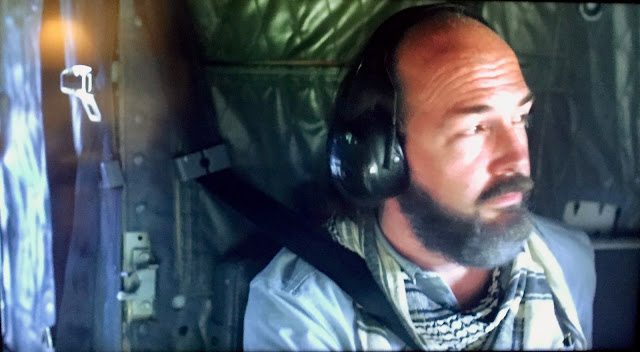 In the latest season (#3) of the Netflix series Narcos, "CIA Bill," the CIA station chief in Colombia, shows up on occasion to confound DEA agent Peña, to explain to him that things are more complicated than he imagines, to frustrate his efforts, etc. I can't remember which episode this is, but what is remarkable is that Bill shows up wearing a kufiya.

Here's how I make sense of this. In the show, Peña is depicted as a straight-ahead guy who goes after the drug dealers with all he's got. CIA Bill, on the other hand, is entangled in complicated, realpolitik arrangements, willing to make alliances with whatever political forces that are on-hand, to further the larger strategic interests of the United States. If that means strategic alliance with one drug cartel to wipe out another, fine. If that means supporting murderous and psychotic anti-communist militias and death squads, fine. To the extent that Narcos brings to bear any criticism of US government policies in Colombia, CIA Bill is the murky, powerful presence who represents the "bad" elements of US actions. Peña on the other hand is the straight arrow.

I think the kufiya is used here to mark that distinction, the fact that CIA Bill is a kind of "rogue" element (not rogue in terms of US official policy, but rogue from the perspective of the show, where the higher morality is to stop the drug trade). The kufiya is, I think, an anachronism, and an unusual one for a show that tries its best to depict Colombia in the 90s with verisimilitude.

The best example of the kufiya as a sign of the roguish tendency in US foreign policy can be seen in The Hurt Locker, where Ralph Fiennes, who plays the Contractor Team Leader, is shown in kufiya. He's not regular military, he and his band at first look like "hajis" to the bomb squad that encounters them. Fiennes' group is not on a regular, scripted mission, they don't play by the normal rules of engagement, and so on. (I've discussed this a bit previously here, and you can see photos here.) And I discuss the emergence of the kufiya as an item worn by US soldiers, especially post-Iraq invasion, and the related phenomenon of it being worn by tough guys on counter-terror or other missions (see: John Travolta in From Paris with Love) here.

There is more to be said, more to work through, but that is it for now.
Posted by Ted Swedenburg at 6:08 PM No comments: 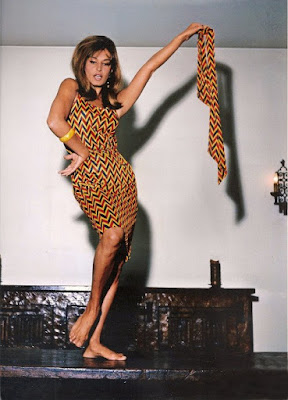 And a few reminders of why Egyptians love Dalida (born in Shubra, Cairo, in 1933, so much):

Posted by Ted Swedenburg at 12:20 PM No comments: