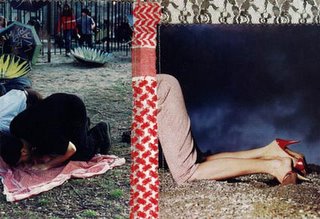 Here's another piece by Josephine Meckseper, from an exhibit entitled, "IG-Metall und die künstlichen Paradiese des Politischen," at Galerie Reinhard Hauff, Stuttgart, April 24-June 5, 2004. Again, the kufiya, red this time, appears twice. On the left are two figures who appear to be doing the Muslim prayers, using the kufiya as a prayer rug. A strip of red kufiya material separates the praying figures from the lower half of the body of a glamorous model, clad in fashionable slacks and red high heels. On both sides of the kufiya strip, the figures are depicted in prostrated and worshipful positions.

Tags: Palestine
Posted by Ted Swedenburg at 12:37 AM

Hey, all this kufiyya-spotting reminds me that I saw one on E-Ring a few weeks ago: This was the episode in which Benjamin Bratt goes to Iraq and crosses over to Iran. The leader of the Marines he was meeting with (on the border) was wearing a kufiyya around his neck.