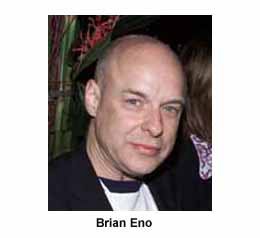 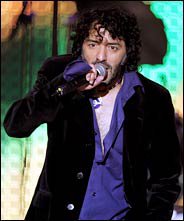 The legendary Brian Eno, French-Algerian Arabo-punkrocker Rachid Taha, Nitin Sawhney (major figure in the Asian Underground movement) and Imogen Heap (Euro-electronica-pop) are joining forces on November 27 in a concert to benefit England's Stop the War coalition. (The concert is at the Astoria in London.)

Eno plays on Taha's latest album, Tékitoi, and has appeared with him in concert earlier this year. The concert marks Eno's first stage appearance in England since 1979. Interviewed in The Independent on Tuesday, Eno had this to say:

It's up to us few who haven't surrendered to television to say, 'Hold on, there's a world out here and it's going badly wrong. Do we want to continue to be proud little partners of a bunch of medieval rednecks [he means Bush & Co.] or are we going to choose to do something about it?'

Although Taha's great song, "Barra Barra," famously appears in the soundtrack of Ridley Scott's Black Hawk Down, Rachid is a longtime and vocal opponent of US interventionism in the Middle East. (He gave permission to Scott to use the song based on Scott's earlier movies, but he considers Black Hawk Down "Orientalist.") In the film, "Barra Barra" comes on as Rangers and Delta Force soldiers are gearing up to go into battle in Mogadishu. It is such a kick-ass song that it serves the function of making them look very cool, ready to "rock'n'roll." I later met someone who served in the US military in Afghanistan who said that guys in his unit used to play Rachid Taha's "Barra Barra" to get pumped up before they went out on patrol. (I should add that the young man who told me this story is now a Middle East Studies student and is not uncritical of US policies in the Middle East.)