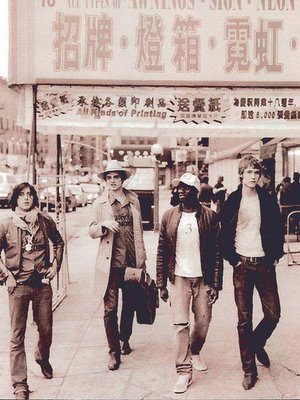 This photo is from the back cover of The Libertines' second, self-titled, album. The band member wearing the kufiya is guitarist-vocalist Carl Barat (if you click on the photo you can see a larger and clearer image). Next to Barat, in the hat, is Pete Doherty, The Libertines' legendary bad boy: confessed heroine and crack addict, in and out of rehab and court, boyfriend to Kate Moss. By the time this album appeared, Doherty was out of the band. The Libertines are a somewhat mainstream, Top 40 rock band, often compared to The Strokes, The Hives and the like. It's worthy of note, therefore, that Barat chose to wear a kufiya in this photo. But also important to remember that The Libertines are English. Meaning that: (a) solidarity with the Palestinians is much more acceptable there than in the US and (b) public opposition to the Iraq war has been much more sustained and vocal than here.