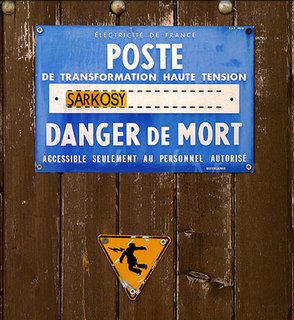 Bouna Traore, 15, born in Mauritania, and Zyed Benna, 17, of Tunisian background: accidentally electrocuted on October 27 at an electricity sub-station in Clichy-sous-Bois, one of Paris' banlieues (suburbs), after reportedly fleeing from police.

Declares a "war without mercy" on violence in the working-class suburbs/banlieues.

I predict that Sarkozy's days are numbered. He's obviously failed so far over the past two weeks, and de Villepin sounds frustrated with his performance.

leave the predictions to the political scientists! let them make idiots of themselves...