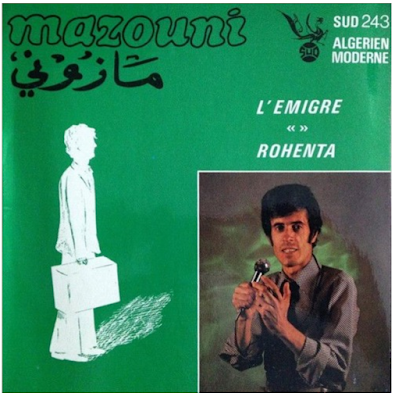 Latest blast from Toukadime, a tribute to Mohamed Mazouni.
Posted by Ted Swedenburg at 6:23 PM No comments: Like many people of my age, I had seen Cardinale in several films (among them, The Pink Panther, Once Upon a Time in the West, and Fitzcarraldo), but never knew she was born in Tunisia. Until I saw Tunisian director Férid Boughedir's 1996 film, Summer in La Goulette, where Cardinale makes an appearance, as herself. The best treatment I know of the various European populations of Tunisia is Julia Clancy-Smith's magisterial Mediterraneans: North Africa and Europe in an Age of Migration, C. 1800-1900 (2010). Highly recommended.
Posted by Ted Swedenburg at 9:32 AM No comments:

I first heard Bob Azzam's "Ya Mustapha" when I moved to Beirut in 1964, it was one of the very few songs in Arabic that any American kid would have been familiar with. It was a hit all over the Mediterranean, and I've posted about it previously. If you're not familiar with it, here it is:


I've since discovered a bit more about the song. First, it shows up in the Egyptian film "El Hob Kedda" (1961) which stars, among others, Salah Zo El Faqqar, Sabah and Abdelmonem Ibrahim. I'm not sure who is shown performing the song here, but it's the Bob Azzam's version.

There is also another version, overshadowed by Bob Azzam's version, recorded by Dalida's younger brother Bruno Gigliotti, known in Egypt as Bruno Mory, and better known in France as "Orlando." Bruno had a brief career as an actor and a recording artist but then went on to become Dalida's artistic director and producer. It sounds much more "Egyptian" and less campy then Bob Azzam's version.

It was released on record by the Egyptian label Sawt al-Qahira, and who knows, maybe it came out before Bob Azzam's version. Note that the lyrics are credited to Sa'id al-Masri, and the music to Muhammad Fawzi. According to an article from Rotana on "Franco-Arab" music, Bruno's version did precede Bob Azzam's. 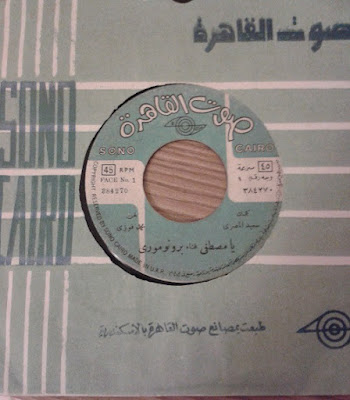 Bruno's "Ya Mustapha" can also be found on a cassette, issued in 1978, called Al-Aghani al-Raqisa (Franco-Arab), or Dance Songs (Franco-Arab). I'd love to get my hands on this cassette. 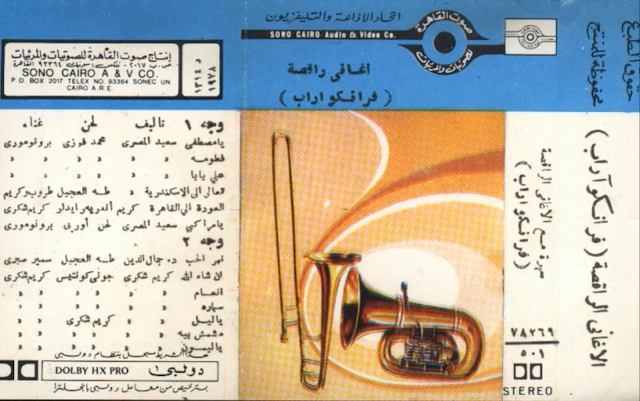 The second song from Bruno on the cassette, "Fattouma," can be heard on YouTube (below). It's very very cool, more "Franco Arab" than his version of Mustapha.


"Fattouma" was released, according to discogs.com, in 1960, from the Egyptian label Misrphone. This song too was by Muhammad Fawzy and Sa'id al-Masri. 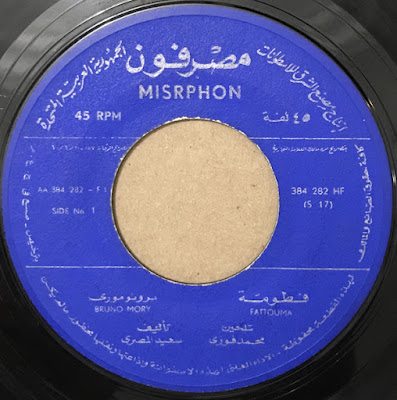 Finally, please check out the amazing scene of Bruno Mory, doing "Fattouma" while dancing the cha-cha-cha with the divine Egyptian actress Hind Rustom, from an online article from Rotana. Sorry, the article is in Arabic, it's the second video embedded here. Really, you must watch it. 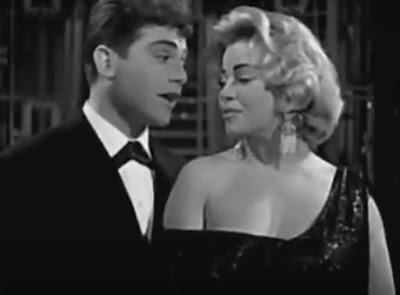 The scene is from the film of the same name, Fattouma, released in 1961. Here's a poster for the film. I've not seen it and don't know much about it. 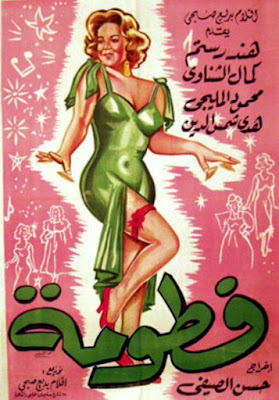 And here is another poster for Fattouma, and note that it announces the participation of "Orlando" (on the right of the photo) in the film. (I cannot make out what it says above Orlando, sorry.) 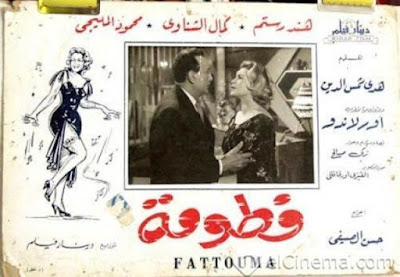 That Franco-Arab cassette also has some songs from Karim Shukry, including "Take Me Back to Cairo," released on Sono Cairo, with lyrics in England. Not as interesting as Bob Azzam and Bruno's material, I don't think, but have a listen, you decide.

Posted by Ted Swedenburg at 11:21 PM No comments: 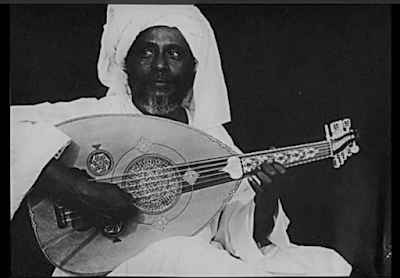 Posted by Ted Swedenburg at 5:46 PM No comments:

This is one of Rimitti's earliest recordings, if not the earliest (and I have the good luck to own this one). One of the tracks, "Erraï Arraï, was, according to Andy Morgan, her first recording, in 1952, for the French Pathé label. But on a 78 rpm, so I'm not sure when this 45 rpm version was pressed. (It was made in France.) Note she was known at this time as Elrelizania (al-Relizania), due to the fact that she grew up in the town of Rélizane (Ghalīzān in Arabic) in Western Algeria. Side A: "Erraï Arraï" (in Arabic al-ray ya al-ray, or "rai o rai."), may be one of the earliest songs in the tradition with "rai" in the title. (Sorry, I'm not able to translate the lyrics.) The genre in which Rimitti performed at the time, however, was not known as rai but as "al-klām al-hazl" or “light, amusing, trifling, playful speech.”

The reverse side of the jacket describes the tracks as "Chant Oranais avec flûte." The photo on the jacket suggests "folklore." Side B, "Kheira Sali Anbi" (Khayra Salli ‘Ala al-Nabi) -- I'm not sure how to translate the title. Salli ‘Ala al-Nabi means "prayers on the prophet," but what "khayra" (good, choice) means in this phrase, I do not know.

But note, however, that this is, at some level, a "religious" song, challenging the notion that became prevalent in the late eighties that rai was quintessentially secular. (The work of Marie Virolle is an excellent guide to the place of religion in rai lyrics of artists like Rimitti.) Both these tracks can be found on the CD, Aux Sources du Rai: Les Cheikhat.
www.flickr.com