Master Mimz, "Back Down Mubarak!"

Master Mimz, working on a master's from the LSE in London, born in Casablanca, did what right now is my favorite solidarity rap for the Egyptian revolution, "Back Down, Mubarak!" I posted on it earlier, but now I've found the lyrics, in this post from Davy D, on February 4th. Old school sound, timeless sentiments.
Welcome to the 3rd world streets
Where the heart beats in times like these
Days of our lives – we feel alive
Get outta here – it’s our time to shine.
Posted by Ted Swedenburg at 9:14 AM No comments:

Arwa Damon of CNN, broadcasting from Benghazi this morning (7 a.m. Cairo time), was wearing a black-and-white kufiya. She was speaking with Libyans in Arabic, which I found impressive--not something you see your US correspondents based in the US doing that often. 2-3 weeks ago, in the early days of the uprising, CNN's Ben Wedemann was wearing a black-and-white kufiya while he was broadcasting from Benghazi. In both cases, I think the kufiya was meant to send a subtle sign of sympathy for the rebels.
I checked out Arwa Damon on wikipedia, and learned these significant facts. Damon graduated from Roberts College in Istanbul. Her mother is Syrian. Her father, George H. Damon, is currently headmaster of the American Community School in Beirut. I met him last July at the ACS reunion in Austin, TX. (I'm an alumnus.)
On another note, I asked a friend about the wearing of kufiyas in Cairo and the revolution. He said that he thought that you see more kufiyas in Cairo now in the wake of the struggles on Tahrir from January 25-February 11. It's certainly true that you see a lot of people wearing them in Cairo this week, in all sorts of colors and on all sorts of people. On Sunday we ran into a demonstration of schoolchildren from outside Cairo, and their teachers on the Corniche, across the street from the Ministry of Information. Two teenaged boys in the group were wearing pink kufiyas.
My friend said there was a shop selling kufiyas at Tahrir during the period when it was occupied. He thought it signified an international symbol of revolution.
Hopefully in the next few days I'll take a photo or two of Cairo kufiya wearers and post it.
Posted by Ted Swedenburg at 12:29 AM No comments:

kufiyaspotting # I don't know how many: Big Boi (Outkast) 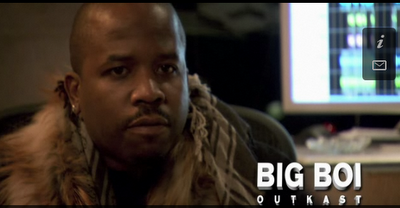 Atlanta rapper Big Boi, of Outkast, appearing in a preview for the forthcoming documentary from Morgan Spurlock (Supersize Me), Pom Wonderful Presents the Greatest Movie Ever Sold. Why he appears in this furry kufiya, who knows. He probably did not get the idea from Ralph Nader, who also appears in the film. (Thanks to Wayne for the tip.)
Posted by Ted Swedenburg at 3:17 AM No comments: 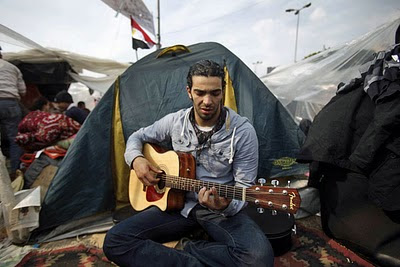 (Michael Robinson Chavez / Los Angeles Times)
On February 9, which now seems so long ago, I wrote a post called "Music of the Egyptian Revolution." Included in it was the now famous youtube vid of Ramy Essam singing "Irhal" (Leave, or, Go Away). I also included a vid of a song about a donkey refusing to step down for a younger one, but I was unable at the time to identify either the lyrics or the singer.
Since then many have written about the music of Egypt's revolution, and I'm able to identify the song and the lyrics. It's Ramy Essam (again), and the lyrics are by the celebrated revolutionary poet Ahmad Fouad Negm, the lyricist for Egypt's beloved revolutionary singer Shaykh Imam.
An article in The Los Angeles Times about Essam gives the story of his performance of the song on Tahrir:
One song that he relished, and that late at night the crowd would want to hear again and again, was an ode written by well-known poet Ahmed Fouad Negm: "The Donkey and the Foal," which everyone knew to be a commentary on Mubarak and his son Gamal.

Essam had written the music and played it for himself alone at home before the revolution. And now everyone shouted for the scathing lyrics of the aging poet, who had been jailed under Mubarak's predecessor. He felt honored when the poet stood with him and recited the words.

The foal said to the donkey, "Father, hand me the cart. Father, you have aged and now it is my turn."

The donkey coughed too strongly and the passengers panicked.

"It isn't about health, son," the donkey said. " Even the bridle is too big for you, son. Think and don't be greedy, or the passengers will rise up."
Since Hosny Mubarak's resignation, Ramy Essam has received a great deal of media attention, and has become something of a celebrity. Featured in the article in The Los Angeles Times, mentioned above, celebrated by Mark Levine in The Huffington Post (Levine produced a remix of "Irhal" as well--I respectfully prefer the original), an featured in an article in The Guardian by respected Middle East music commentator Andy Morgan, who calls Essam the Billy Bragg of Tahrir Square.
Before you imagine that Ramy Essam has gone all rock star, check out this video. It shows Essam performing his song "Irhal" on Tahrir Square to a big crowd. Later that night, the crowd at Tahrir is attacked by Mubarak's thugs. The pro-democracy forces keep them at bay. The video then shows Ramy Essam on the following morning. He stayed the night, and was wounded on the head by the rocks hurled by the counter-revolutionary goons. As far as I can tell, this occurred on the night of February 4-5, 2011. I don't know many "rock stars" who have the street fighting cred and the courage of Ramy Essam. I don't know if I know of anyone, in fact. Below is a screen grab of Ramy with his head bandage, and then, the full video. 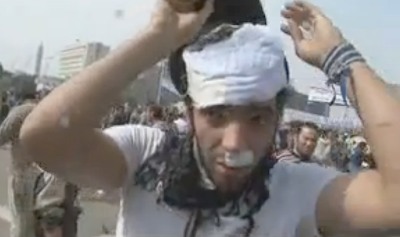 And you can find out more about Ramy Essam, and download some of his music (although not the songs discussed above) from his Facebook page.
Posted by Ted Swedenburg at 11:00 PM No comments: