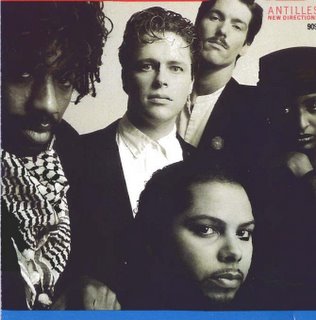 The photo is from the jacket (not the cover) of Defunkt's 1988 release In America. Defunkt was a great and eminently danceable New York jazz-funk fusion band led by trombonist Joseph Bowie. (Bowie's picture is on the cover, the photo here shows the band members.) I think the guy wearing the kufiya is Ronnie Drayton, who along with Bill Bickford plays guitar on the album. (Drayton has also recorded with Nona Hendryx, Jamaaladeen Tacuma, Bill Laswell, and James Blood Ulmer.)

It's notable that Defunkt's In America was released in 1988. Kufiyas had been worn for a number of years by US progressives expressing solidarity with the Palestinians, as well as by urban hipsters who considered kufiyas not only cool-looking but also, perhaps, slightly "dangerous." It was only in 1988 that kufiyas were noticed by the mass media. Several reports appeared that remarked upon and tried to make sense of the kufiyas that were spotted, especially in urban centers. What made them suddenly worthy of commentary? The first Palestinian intifada, which erupted in 1987. For a time, the intifada was massively covered on nightly TV news, and so one regularly saw Palestinian youths, sporting kufiyas and throwing stones at heavily armed Israeli soldiers. (For more, see my article "Seeing Double: Palestinian-American Histories of the Kufiya," Michigan Quarterly Review 31(4), 1992.)