Dalida in Algiers, 1965, on the same bill as Mahieddine Bentir

Oh, to have seen this show in November, 1965 in Algiers, just three years after Algeria gained its independence! On the 11th anniversary of the launching of the Algerian revolution, organized by Algeria's national tourism office (ONAT). The divine Dalida, born in Shobra, Cairo, and a star throughout the Mediterranean. 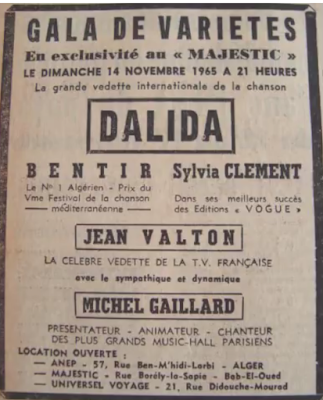 One guesses of course that Dalida played her greatest hits, including those that hit the charts in France in 1965:

I find it quite amazing that Dalida was welcomed to Algeria in 1965, given that according to wikipedia, and other sources, Dalida had performed for the French colonial troops in Algiers in summer 1958. It's rather amazing how forgiving the Algerians were, given that hundreds of thousands of Algerians (the figure is not agreed upon, but perhaps Horne's number, 700,000, is a plausible number) were killed in the war of liberation (1954-62). Here's a photo of Dalida with one of the colonial soldiers, snapped by a fan. 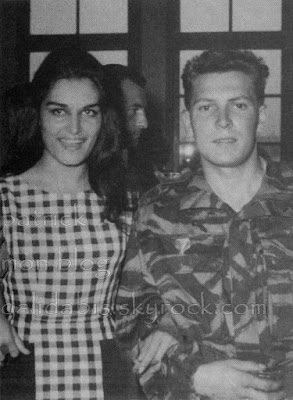 In thinking about Dalida in Algeria, I came across an article by Barbara Lebrun, "Daughter of the Mediterranean, docile European: Dalida in the 1950s" (Journal of European Popular Culture 4(1), 2013). It argues that the Egyptian-born singer's Mediterranean identity was carefully crafted, as her career was launched in France in 1956, to occlude her origins: "Because Dalida’s early success in France coincided with the Algerian War, the singer’s oriental provenance was strictly ignored, and her ‘Mediterranean’ identity instead remapped onto the northern shores of the Mediterranean Sea." (Note: I've only read the abstract, and am waiting to receive the full article.)

Apparently by 1965 her handlers thought it was okay for her to be seen as associated with Algeria. But note that she did not record in Arabic until 1977, with "Salma ya salama."

What really excited me about this concert was the fact that she was on the bill with Mohieddine Bentir. I've blogged about him previously, but let me both recap and add some more details. Born in 1930, Bentir recorded a terrific rock'n'roll song, "Scooter," apparently in 1955.

In 1959, there was "Ana Bouhali," a cha-cha cha, done Cuban style, very, very hot. Check this out, from Algerian television, broadcast during the colonial era. (Added November 4: It's a remake, in Arabic, of a song recorded that same year by Dario Moreno, "Le marchand de bonheur," the Turkish singer who made his career in France during the fifties and sixties.

Later, he was doing twists, most famously, "Optimiste Twist," from 1964. I mention some other tracks on my earlier blog.

If you check these three tracks, you could get an idea about what a terrific performer Bentir was, and, wow, I just can't imagine (again) how cool it would have been to see him opening for Dalida in Algeria.

If your Algerian Arabic is good (and mine is minimal), check out this report on Bentir from Algerian television, broadcast in 1994. I wish I could track down more.


Addendum (11/3/18): Kareem tweeted this at me: Bentir talks about his show with Dalida in the video (at 15:00). When they went to dinner she asked him to ask if there were fava beans. A real Egyptian I guess :-).
Posted by Ted Swedenburg at 6:41 PM No comments:

I've posted about the Danish designer Cecilie and her kufiya fashion designs previously (back in 2014). Most of her designs (but not all) are kufiya patterned, and she has been doing this consistently for several years, since 2011. She seems to be pretty successful at it, and I have to say I am quite amazed, and somewhat mystified, by the longevity of her project. Maybe someone in Copenhagen can explain it to me in future. I know that kufiyas are quite commonly worn in various ways in Scandinavia, and that a kufiya is called a Palestinasjal in Sweden. But on her website Cecilie never mentions Palestine in reference to the origin of the pattern that is the basis of most of her clothing offerings.

In any case, I just became aware of what I considered a notable new offering from Cecilie, from her Autumn/Winter offerings: the "Petula Top," with bare shoulders and wide collar. My guess is that the Petula referred to is Petula Clark, but after a brief survey of photos of Petula from her heyday, I do not see bare shoulders and wide collar tops as iconically Petula. It's a mystery to me. In any case, you'll find below a model in the kufiya patterned Petula Top. For more shots of the top, priced at $165, go here. For more on Cecilie, go here. 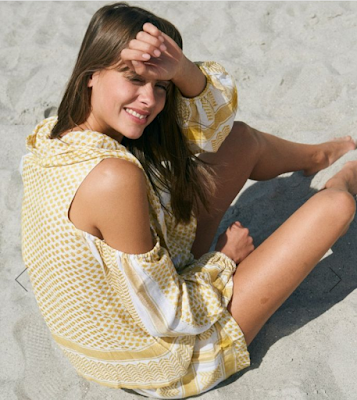 Posted by Ted Swedenburg at 11:34 PM No comments:

Kufiya patterned Palestine nails -- take this design to your nail salon lady and you can have them too. 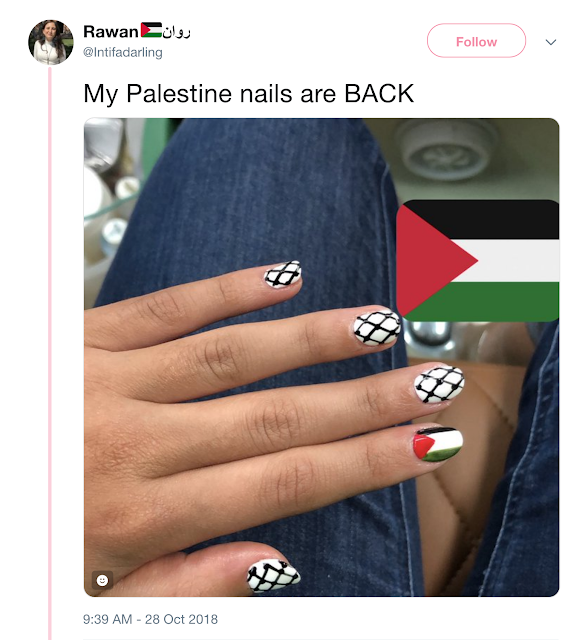 Posted by Ted Swedenburg at 10:36 AM No comments: 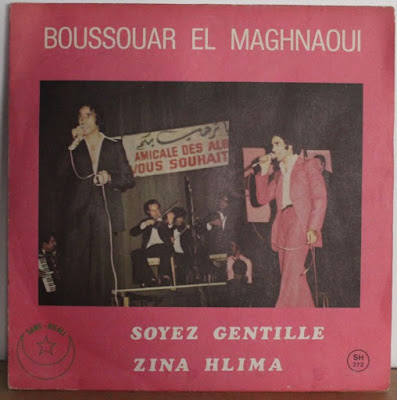 Record covers of previously obscure recordings are much more readily available these days, due to various sources: discogs.com, ebay auctions, and FaceBook groups. This was vinyl single from pop-rai singer Boussouar El Maghnaoui was recently auctioned on ebay. Unfortunately I was not able to secure it -- such recordings, from Algeria in the seventies, when pop-rai was being invented, have become eminently collectible.

Boussouar El Maghnaoui was a second-tier figure in the pop-rai scene that developed in western Algeria from the mid to late 1970s, less well remembered than figures like Messaoud Bellemou, Belkacem Bouteldja, or Boutaïba Sghir. On his recordings he was usually backed by Groupe El Azhar, from Oran. Other lesser (but nonetheless important) lights backed up on pop-rai recordings during this period include Gana El Maghnaoui, Hocine Chabatti (AKA Cheb Hocine), Boutaïba Sghir's brother Afif Bashir and Mohamed Mazouzi. El Maghnaoui hailed from Oujda in eastern Morocco, symptomatic of the substantial cultural contact across the border between the east of Morocco and the west of Algeria. (During the colonial period many Moroccans migrated to work in western Algeria during grape harvest season.)

I don't have access to these two songs from El Maghnaoui, but there are several that you can find on YouTube, including this one.

It is very much in the mode of the pop-rai produced in the same period by Bellemou and his group, based in Aïn Témouchent, and my guess would be that Bellemou set the standard which others then imitated. According to maghrebunion, who posted the video, it features Ghana El Maghnaoui on trumpet (playing Bellemou style) and "Kassem" from Oran on saxophone.

Check these out as well, courtesy the blog Phocéephone.
Posted by Ted Swedenburg at 5:31 PM No comments: 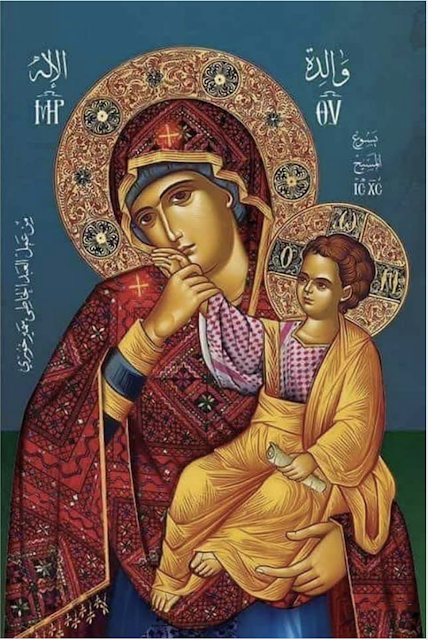 A friend posted this one on FaceBook. It looks like it could be a reproduction of an icon. Modern vintage, no doubt, with Jesus wearing a shirt in kufiya pattern, and Mary wearing a shawl with traditional Palestinian embroidery. The artist appears to be al-‘Abd al-Hati Samir Khuri.
Posted by Ted Swedenburg at 9:10 AM No comments: