The great Lebanese alt-rock band Mashrou' Leila is on tour in the US (and bands like this, of course, always skip Arkansas in such cases), and they played DC and showed up in the NPR studio to do a Tiny Desk concert. Their appearance (Monday June 13) coincided with the news of the Orlando massacre. Their lead singer, Hamed Sinno, is out gay, and they have been the subject of some controversy in Lebanon for their queer positivity.

The group opened its Tiny Desk set with "Maghawir" (Commandos), a song Sinno wrote in response to two nightclub shootings in Beirut — a tragic parallel to what happened in Orlando. In the Beirut shootings, which took place within a week of each other, two of the young victims were out celebrating their respective birthdays. So "Maghawir" is a wry checklist of sorts about how to spend a birthday clubbing in their home city, but also a running commentary about machismo and the idea that big guns make big men.

"All the boys become men / Soldiers in the capital of the night," Sinno sings. "Shoop, shoop, shot you down ... We were just all together, painting the town / Where'd you disappear?"

It's a terrific song, very moving, and wow, so appropriate.

In an article about Mashrou' Leila by Kim Taylor Bennett, on Vice's musical channel Noisey, the group elaborate further about the song:

"‘Maghawir’ narrates a possible version of a club shooting in Beirut, drawing on references to real Lebanese case histories from two different shootings that took place within the same week, both of which resulted in the deaths of extremely young victims, each of who was out celebrating their birthday.

"The lyrics are formatted to read like a list of steps to follow on a night out in Beirut, satirically referencing the hordes of tourist-targeting bucket lists that overshadow readership on Lebanon like 'Things to do in the city of nightlife,' while maintaining a conscious attempt to sketch out the more tangibly tragic facets of such rampant and un-policed violence and gun ownership by accentuating the innocence of the victims involved—be that by opening the lyrics with a happy birthday wish, or only alluding to the actual death of the victim by running the metaphor of losing someone in the crowd of a club.

"On the other hand, the lyrics constantly brings up gender to situate the events within a broader discourse on gender and the recruitment of Lebanese men into locally-revered militarized masculinities, where said violence often becomes not only common, but rather part of a list of gendered provisions for the preservation of men’s honor, as demonstrated in the case studies the song refers to, where both assailants shot in retaliation to having their pride (masculinity) publicly compromised.

"In marrying the lyrics with upbeat dance-worthy music, the song gestures towards the evident normalization of such behavior, wherein lies the critique of the 'capital of the night,' by questioning whether or not violence is just another thing we can dance to, another element of the country’s nocturnal paysage under the continued patronage of the political elite which often chooses to protect criminals because of vested political interests."

Three different transliterated and translated versions of the song are here.

Also, check out this very smart article from Good by Tasbeeh Herwees, who interviewed Mashrou' Leila when they performed in Los Angeles in November 2015, on their first US tour. (They're now on their second.) A few choice excerpts:

The musicians, however, are rarely asked to talk about technique and style. “We’ll go to France, someone will ask how we feel about Charlie Hebdo,” says Sinno. “Or we'll go to Italy and someone will ask us if we can buy CDs where we come from. It's embarrassing.”

With the advent of the 2011 Arab uprisings, Mashrou Leila’s fans conceived new explications for the music. “The interpretations go their own way,” says Abou-Fakher. “[Our music] gets appropriated for movements in Egypt at a particular time or to a cause in Palestine at another time.” Songs that previously gestured at discontent were reappropriated as calls to revolution. They were played at political rallies in Cairo, Tunis, and Amman, where the band has massive—and growing—audiences. “Inni Mnih,” a song on their 2011 album El Hal Romancy—in which Sinno sings, “let’s burn this city down and build a more honorable one”—was misread as an anthem for the Egyptian revolution. Once, at a music festival in Beirut where the group Gorillaz was also playing, the band sang an Arabic rendition of Gorillaz’s “Clint Eastwood” as a tribute. The clip found its way online, where it was reinterpreted as a rallying call for protesters in Tunisia. “It gets all these political associations slapped onto it,” Sinno says...

In “Djin,” the third track, Sinno sings, “I don’t do sodas, I don’t do teas / I drown my sorrows, forget my name and give myself to the night / liver baptized in gin, I dance to ward off the djin.” The lyrics are an exercise in demystification, an attempt to dismantle the myth of Beirut as a playground for Western jet-setters and nightclub-hopping tourists. “At the very beginning, we were sort of pissed off about the way Beirut is always portrayed as this party destination,” says Sinno. “For people who live there, there's a lot of actual politics that get negotiated in these spaces, in bars and clubs.”

The “danciest” song on the album is also one of their most sobering. “Maghawir”—which begins by narrating a night out in Beirut—is about nightclub shootings in Lebanon. “Shootings in clubs in Beirut happen more frequently than I think people would like to admit,” says Sinno. Only last month, a club shoot-out in the city killed eight people. “Wear your black suit and come down,” Sinno sings on the track, “bearing that when snow caps the hill / all the boys become men / soldiers in the capital of the night.” 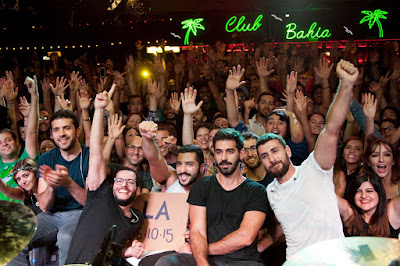 And...here's what Sinno said in the group's Washington, DC concert on Monday, according to CNN.

He reacted strongly to a crowd following the mass shooting at an Orlando gay nightclub, lamenting the attack against the LGBT community as well as the rhetoric against Muslims and Arabs that followed.


"Suddenly, just because you're brown and queer you can't mourn and it's really not f---ing fair," Sinno said on stage while performing at the band's sold out show Monday night at The Hamilton in Washington. "There are a bunch of us who are queer who feel assaulted by that attack who can't mourn because we're also from Muslim families and we exist ... this is what it looks like to be called both a terrorist and a faggot."
Posted by Ted Swedenburg at 4:34 PM 1 comment: