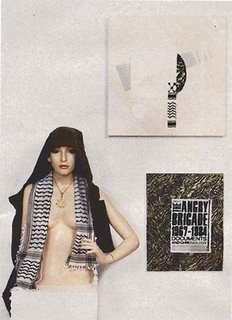 It's weird: yesterday I finally got around to scanning and writing about 3 of the kufiyas I've spotted over the last few months. Today, while thumbing through the New York Times T Style Magazine: Travel I find this! The reproduction of a piece by Josephine Meckseper called "Untitled," featured at the Lyon Biennial of Contemporary Art that runs through December 31.

Two of the three parts of this work feature the kufiya. First, there is the manikin, wearing the kufiya as a scarf that partially obscures her breasts. She also sports a kind of hoody vest, which covers her head and hints (vaguely) at an Islamic headscarf. Her gold pendant is an iconic marijuana plant. Second, above and to the right is a painting, whose style is remiscent of Russian Futurism. The straight line which looks like it might be part of a question mark is a piece of kufiya fabric. Next to the manikin is the cover of a book, entitled The Angry Brigade, 1967-1984: Documents and Chronology. The Angry Brigade were a left-wing, anarchist-inspired urban guerilla organization in Britain that conducted a series of bomb attacks on "establishment" targets between 1970 and 1972. (The Angry Brigrade could be compared, loosely, to the US Weather Underground.)

Printed Matter's press release for its book launch for The Josephine Meckseper Catalogue describes what the artist is up to as follows:

Kufiyaspottings #2-#4 below illustrate well the kufiya's role in the phenomena that Meckspeper is investigating: how countercultural and leftwing politics are closely connected to style, "cool," and commodification.

Meckseper is German born and now a resident of New York City.