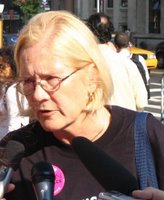 Interview from TomDispatch with Ann Wright, a native of Bentonville (home of Walmart). Ann is one of three Foreign Service officers who publicly resigned immediately before the launching of the invasion of Iraq, in protest of US foreign policy. In August, she helped run Camp Casey for Cindy Sheehan in Crawford Texas, and more recently, she was escorted out of chambers for protesting against Condoleeza Rice's testimony before the Senate Foreign Relations Committee.

(My one quibble with the interview concerns what she says regarding her recent speech at Fayetteville High School. She describes "Fayetteville, Arkansas," as "a very Republican part of the United States." Although Northwest Arkansas is indeed very Republican, Fayetteville is very Democratic.)

Leaving that aside, the U of A should definitely give this woman an honorary doctorate!