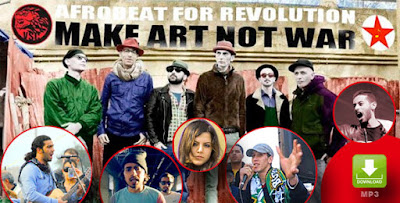 It's great, give it a listen (download here) -- I particularly like the segment from the one female rapper, also the only Iranian rapper, the super Salomé. Read more about it here from Freemuse.
Posted by Ted Swedenburg at 9:20 AM No comments:

I love this photo: 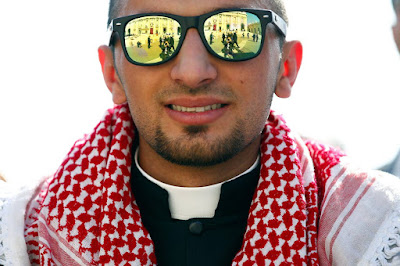 The priest (his name is not given) is waiting for the ceremony (May 18) in which Pope Francis canonised four nuns, two of them Palestinians (Sisters Mariam Bawardy and Marie Alphonsine Ghatta). He is really stylin', isn't he? (Here is the source. The photographer is not identified. Thanks to Allen Hovey for this.)
Posted by Ted Swedenburg at 10:04 AM No comments:

Bendaly Family's "Do You Love Me?" --- 3.5 million views and still counting (but no royalties)

My post of April 19, 2007 had the following title: "Is this the best video clip of Arabic music ever?" (I don't know whether anyone who read the post realized the fact that the question was tongue in cheek, as the song is sung entirely in English with the exception of a couple of aywa's interjected.)

Accompanied by this video:

Who knew that I was part of what was to become a huge trend? Pierre France discusses the Bendaly (alternate spellings: Bendali, Bandali, Bandaly) phenomenon in a recent article on OrientXXI.

It turns out the family is from Tripoli, Lebanon. They were a very big live sensation in the seventies and into the mid-eighties, playing in the Arab capitals and as far afield as London and Australia. They did make recordings, but the thing was the live show. Because of this, their music does not show up on the collections of Arab music that are now being issued in a wave of nostalgia for the old stuff. Even though "Do You Love Me?" is a huge on-line sensation. I'm not sure where Pierre France gets his figure from, I guess it must be counting up the views from several different on-line versions. Let's hope, with Pierre, that the Bendalys do really get discovered, and start collecting some royalties.

Meanwhile, here are some great vids:

Live in Kuwait (this is the first of three). Really delightful.

"Ayilitna Ayilah" (our family's a family), where the stage looks like something out of Hollywood Squares.

"Ghazala." Nice oud from Roger Bendaly on this one, even if just a bit out of tune.

Posted by Ted Swedenburg at 8:20 PM No comments:

Kufiya iPhone 5 and 6 case, made out of wood!

You, and I, really need one of these!

They come in 3 flavors: cherry, rosewood and walnut. This is the walnut: 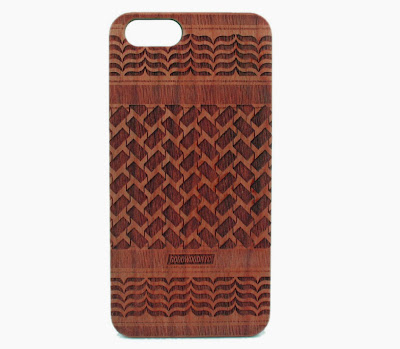 Posted by Ted Swedenburg at 8:51 PM No comments:

The 'rai rebel' Cheikha Rimitti was also a 'hadja' 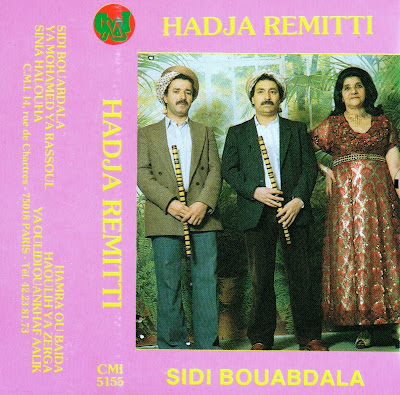 The typical bio of the great rai artist Cheikha Rimitti will almost invariably label her as a "rebel," as the well-informed music journalist John Pareles does in his New York Times obituary of May 28, 2006. Also typical is an account of how she got her name -- which had to do with drinking -- and how, in a song recorded in 1954, Rimitti challenged sexual taboos regarding virginity for unmarried women. Pareles raises these two issues, as does almost everyone else. In an earlier post, I've tried to problematize, or at least complicate, both these stories.

The discourse surrounding Rimitti is consistent with the usual world music accounts of rai music, which stress its "rebel" quality and tend to emphasize the antagonism between the rai rebels and Islam.

To his credit, Pareles' obit does (as do many other accounts) acknowledge that Rimitti made the hajj to Mecca in 1976 (some say 1975) and that as a consequence she gave up drinking and smoking. She did not, however, give up performing, and her songs continued to be "edgy" when it came to the subjects of women and sex. I do not have the space to elaborate here, but it should be asserted that there is no necessary inherent contradiction between being a believing Muslim and singing in public about women's issues, including sexuality. (Unless, of course, one believes that salafist Wahhabis get to define what "real" Islam is.) The key source to consult on these issues, when it comes to rai, is Marie Virolle's La chanson raï.

When I visited the Barbès district of Paris in summer 1992, I found this cassette in one of the many cassette shops selling vast quantities of rai tapes. It's the only recording I've ever seen where Rimitti is called "Hadja" rather than "Cheikha."

The tracks are: "Sidi Bouabdala" (I presume this is the name of a saint); "Ya Mohamed Ya Rassoul" (O Mohamed O Prophet); "Sinia Halouha"; Hamra Ou Baida (Red and White); "Haoulih Ya Zerga"; and "Ya Oulidi Ouankhaf Aalik."

As far as I can tell "Ya Mohamed Ya Rassoul" is the only track that is unambiguously "religious," but of course, to do such a set of songs and include a song in praise of the Prophet Mohamed was a way of making the other material (if it does indeed deal with "secular" concerns like male-female relations) socially acceptable. (Virolle has written about how [Cheb] Khaled has used the same mechanism as a strategy. He typically used the song "Salu' 'ala al-Nabi" (Praise the Prophet) to open or close concerts in Algeria during the eighties, as a means of making his other material, dealing with, say, alcohol and dancing, acceptable.)
Posted by Ted Swedenburg at 2:04 PM 3 comments: 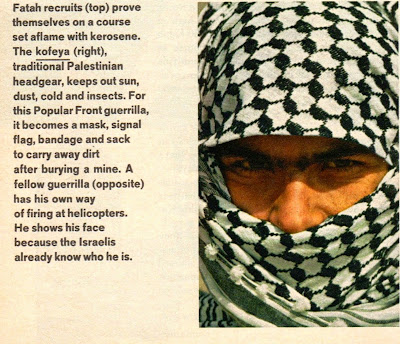 From an article in Look magazine, May 13, 1969, entitled "Revolt of the Arab Refugees: 'We'll Meet in Tel Aviv!'", pp. 27-36. It's by Look senior editor Christopher S. Wren, and the photos are by Thomas R. Koniges. If I'm not mistaken, one of the early accounts of the Palestinian resistance movement based in Jordan by the US mass media. It is fairly even-handed, given that it is not hostile to the fedayeen, even if it sees the Palestinians and the Israelis as two more or less equivalent "sides." (Christopher Wren, incidentally, now teaches at Dartmouth College.)

Here's a photo of PFLP fighters, from the same issue: 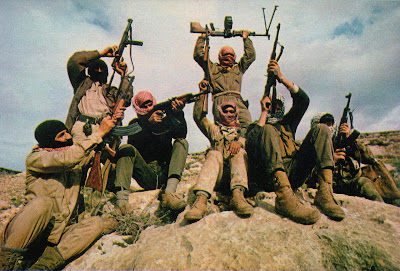 The cover of the magazine: 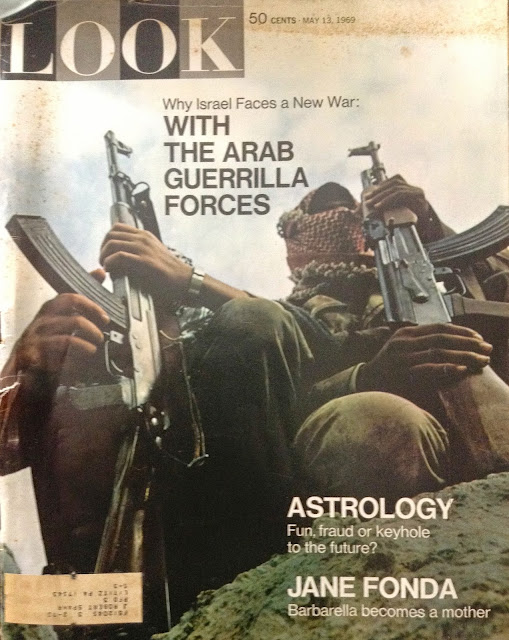 Posted by Ted Swedenburg at 11:11 AM No comments: 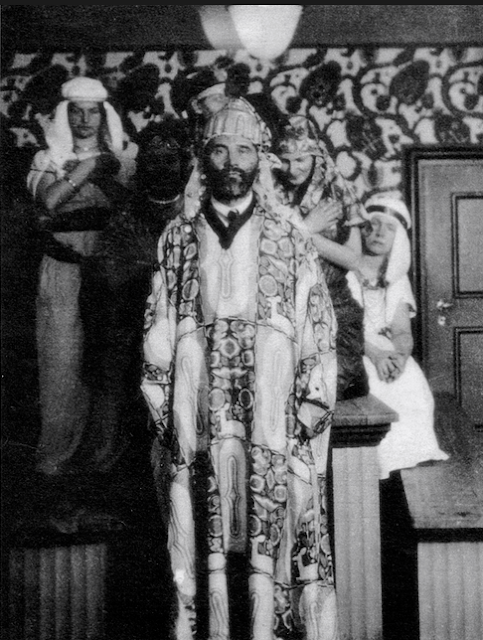 Famed Viennese painter Gustav Klimt, at an artists' party hosted by Otto Primavesi at his house in Winkelsdorf (Moravia), 1916. Otto and his wife Eugenia were among the most important patrons of Klimt in his last years. Otto was owner and director of the Primavesi Bank, based in Olmütz (now Olomouc, Czech Republic). Klimt designed the Primavesis' country house at Winkelsdorf.

Orientalist parties like the one depicted above were a common feature of bourgeois life in the US and Europe in the first three decades of the twentieth century, as I've blogged about previously: here and here.

Posted by Ted Swedenburg at 6:35 PM No comments:

Bad news yesterday (May 20, 2015), the death of Sam Zaman, age 50, who recorded as State of Bengal. State of Bengal were one of the key players in the so-called Asian Underground movement that emerged in Britain in the mid-to-late nineties. Read more about him here.

I particularly like these State of Bengal tracks: "Chittagong Chill"

Sam was also involved in Khaled's version of "El Harba Wine" recorded with Amar. (Not, in my opinion, one of Khaled's most successful outings.)

This is way better, the State of Bengal remix of Massive Attack's "Inertia Creeps."

Posted by Ted Swedenburg at 10:28 AM No comments:

From the cover of the latest issue of Qantara, published by the Institut du monde arabe in Paris. 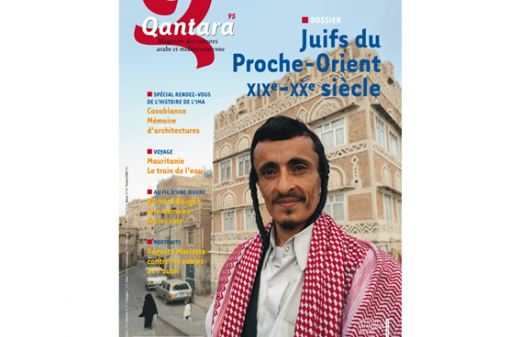 The photo is of one of the last remaining Jews in Yemen, now a refugee in Sanaa (© Naftali Hilger).
Someone who knows Yemen will have to explain the particular significance of the kufiya.

This topic of this issue of Qantara is Jews of the Near East in the 19th and 20th centuries, and it features articles by Orit Bashkin, Abraham Marcus, Joel Beinin, Sami Zubaida, and Trevor Parfitt, plus an interview with François Zabbal. Check out the table of contents here.
Posted by Ted Swedenburg at 12:43 PM No comments: