Kufiyas and the Beur movement in France

I have read in a couple sources and also seen photos of kufiyas in the Beur movement in France of the eighties. The term Beur (verlan, a form of French slang that involves the reversal of syllables, for 'arabe') refers to young French Arabs of North African origin, the sons and daughters, or grandsons and granddaughters, of immigrants to France. Their movement was launched in 1983, with the March for Equality and Against Racism, which began in Marseille on October 15, 1983, and involved only 17 persons. It gradually picked up steam, and after 50 days, when it reached Paris on December 3, 1983, its numbers had grown, and tens of thousands rallied in Paris at its conclusion. Its effect was to put the issue of the Beurs and their struggles for recognition and against racism into public awareness. Below is one of the photos I've found (can't recall the source), and I think it is the activist Toumi Djaïdja (see below) who is wearing the kufiya. 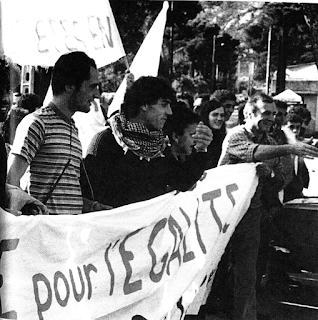 Franceinfo INA did a short report on the 35th anniversary of the 1983 march in 2018, and it you can also see kufiyas on a number of the marchers, as in the screen shot below. 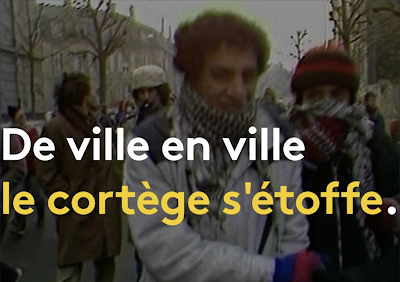 Also of interest is that it was not just Beurs wearing kufiyas, but also some of their non-Arab French supporters. There is a short clip of Father Christian Delorme wearing one as well. 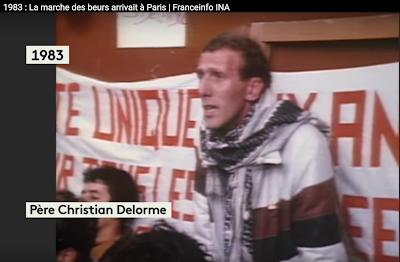 Father Delorme is a progressive, activist priest, who served in Minguette, a banlieue of Lyon, home to a significant population of immigrants and their descendants. It was in the wake of a series of violent confrontations between young residents of Minguette and the police, in which a prominent activist named Toumi Djaïdja was badly injured, that the march originated. Delorme was one of the initiators and participants.

And here is the video clip from Franceinfo INA (1983 : La marche des beurs arrivait à Paris) sourced here. Another item of note is that Enrico Macias was one of the celebrities who joined the march when it arrived in Paris, and he is interviewed in this clip.

Posted by Ted Swedenburg at 10:30 PM No comments:

Yesterday I read Maurice El Medioni's book, A Memoir: From Oran to Marseilles (1938-1992 (a terrific resource) and learned this fascinating detail from Ben Mandelson's preface, that Woody Guthrie, who served in the Merchant Marine during World War II, landed in Oran, Algeria in 1943 or 1944. (El Medioni was 15 years old in '43, and Mandelson's fantasy is that the young man might have run into Woody at some point, as he was doing a lot of business with the US military personnel who were in his city. And also learning a lot about US popular music.) 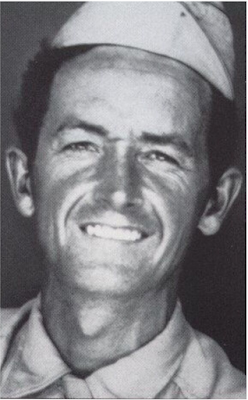 Here's what I was able to find out, with an online search, about Woody's experiences in Algeria, from Will Kaufman's book, Mapping Woody Guthrie, just out from the University of Oklahoma Press. 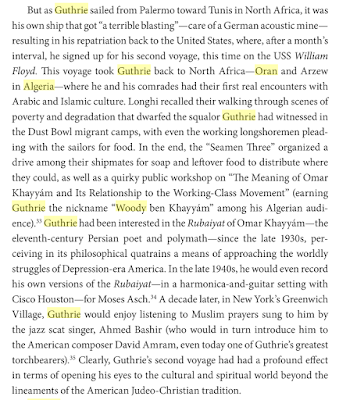 Amazing, eh, Woody, as one of the "Seamen Three" (the other two: Cisco Houston and Jim Longhi), organizing a public workshop on the relation of Omar Khayyam to the working class movement. Woody known as "Woody ben Khayyam." Woody's song, recorded in the 40s, "The Rubaiyat (excerpt)." And his friend Ahmed Bashir, an American jazz scat singer. I've requested Kaufman's book and Longhi's memoir, Woody, Cisco and Me, from interlibrary loan, and I hope to report back when I learn more. Apparently the trio grew beards on the way to Oran, so they could mingle more readily with the local population in off-limit places and so avoid the MPs. 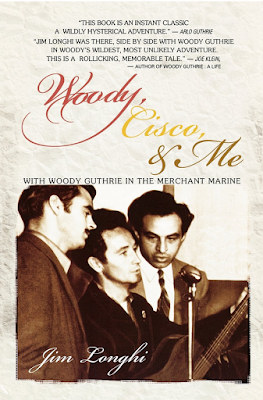 Don't give your money, not one penny spend
To learn the secret of your life, my friend
One little hair divides the false and true
And on that little hair, it starts and ends
One hair, I guess, divides the false and true (the false and true)
Find this one hair no matter what you do (what you do)
This hair will lead you to the drinking room
And to the wives of your great landlord too
I rolled in pain down on that sawdust floor (the drinkin' floor)
I prayed to heaven to open its golden door
I groaned and yelled: How long must I here roll? (roll here)
You must roll here till you are you no more (you no more)
I wasted lots of hours in the hot pursuit
Of this and that argument and dispute
Better to kiss the lip with laughin' grapes
Than eating sad or proud or bitter fruit
I'm glad I went off on my big carouse
And took my second wife into my house
Divorced old dried-up reason out of my bed
Took this daughter of the vine to spouse
What is and is not proof I rule in line (I rule in line)
And up and down by logic I define
I guess you thought I was a deep wise man
I never went deep in anything but wine
My drinkin' door eased open late last late (last night late)
I saw a lady with an angel shape (pretty girl)
She handed me a glass of wisdom juice
I drank it down and found the juice was grape
This grapy juice can prove a billion things
Can make our racial haters dance in rings
Can make our seventy-two fightin' priests and princes
Sing sinful songs, and tease my kings and queens (queens and kings both)
If God roiled my good wine, then would he dare (he wouldn't dare)
To make my viney grape a trap an' a snare
I drink my wine and I bless your sweet red mouth
If wine's a curse, well then, who set it there?
Posted by Ted Swedenburg at 7:08 PM No comments:

The best endorsement for Bernie Sanders...ever?

Khaled Beydoun, the author of American Islamophobia: Understanding the Roots and Rise of Fear, is my new colleague at the University of Arkansas (he teaches in the law school). I hope I get to meet his mom someday!

Posted by Ted Swedenburg at 9:09 AM No comments:

I just discovered, while looking for used vinyl, that a photo of a Gnawi is featured on the cover of The Youngbloods' 1971 live album, Ride the Wind (other notable songs on it besides the title track are "The Dolphin" and "Get Together," the group's only hit). 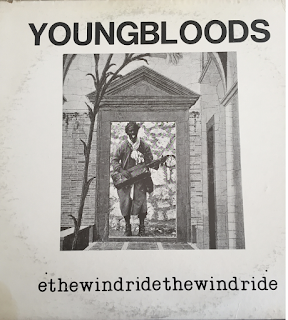 The same photo also features on the Orchestre Nationale de Barbès' 1998 concert album. A big difference between the two albums, of course, is that the ONB actually use the Gnawa instrument depicted, the ginbri, in their work. 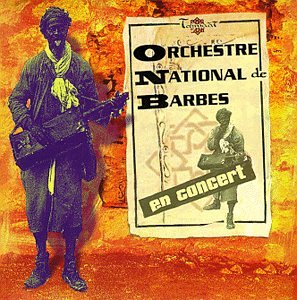 I've not been able to find any live footage of the ONB using a ginbri, but here's a clip of them doing one of their many great songs, "Salam."

Posted by Ted Swedenburg at 9:05 AM No comments:

Isn't the jacket for this 45 rpm amazing? 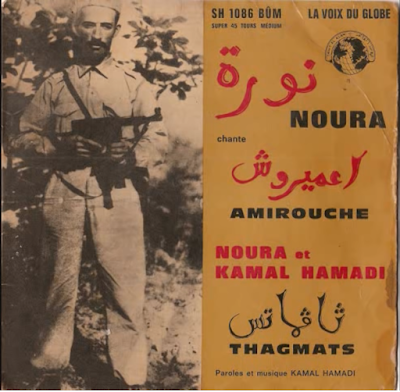 The song "Amirouche" (listen here), a tribute to Amirouche Aït Hamouda, a hero of the Algerian war of independence. A lieutenant in the Army of National Liberation (ALN) and head of the Third Wilaya, he was killed in battle with the French colonial forces on March 28, 1959.  Read more about him here. The record was released on the Algerian label La Voix Du Globe -- I'm not sure in what year. 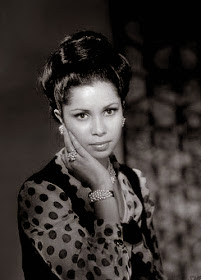 Noura (1942-2014) was one of Algeria's great female artists, who recorded over 500 sides, in Arabic, Berber (Kabyle/Taqbaylit) and French and in a variety of genres, in both France and Algeria, between the fifties and the eighties. Read more here.

And please check out this Scopitone from Noura, "Ammi Belkacem."

Posted by Ted Swedenburg at 10:46 PM No comments:

On Cheikha Aicha La Hebrea: Cheikha Aicha La Hebrea has left barely an archival trace but a number of her recordings survive on Gallica. What is remarkable about this record is that it reminds that international labels like Pathé were keen to record popular music as much as the Andalusian high art repertoire. In fact, what we have here is one of the many covers of the Algerian Jewish artist Lili Labassi’s wildly popular “Mamak", recorded for Columbia Records in 1930 and which then spread like wildfire across North Africa. Indeed, one French composer at the time noted that every shoeshine boy from Algeria to Morocco was known to sing the tune. Among other things this recording provides us with a sonic glimpse into the North African popular music charts of the 1930s.
Posted by Ted Swedenburg at 10:36 AM No comments:

one of the best kufiyaspottings ever 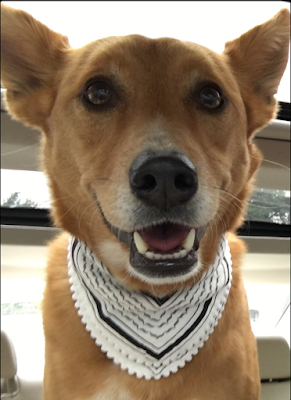 This kufiya bib is available from the Palestine Online Store for $13.
It's also for use with small children, but I really like it on the dog.
Posted by Ted Swedenburg at 9:17 AM No comments:

Now, there's a kufiya for ya (found today, somewhat randomly -- Feb. 10, 2019). Another example of what I've called "tough guy kufiyas." Should I expand the notion to be "tough guy/gal kufiyas," or is this woman depicted here as a kind of trophy for the tough guy?

Posted by Ted Swedenburg at 5:04 PM No comments: