Do you think Erykah is wearing a pink kufiya in this photo, used to announce The Beat Tape Vol. 2 from her project The Cannabinoids? Which, by the way, you really should grab and listen to. Try Vol. 1 too. 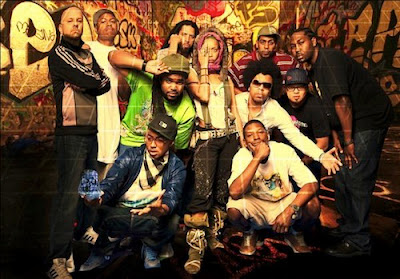 Posted by Ted Swedenburg at 6:14 PM No comments:

Dabke: Sounds of the Syrian Houran, from Sham Palace

This release from the label Sham Palace is terrific. (I say that based on listening to the samples: haven't yet purchased it. But I aim to soon.) 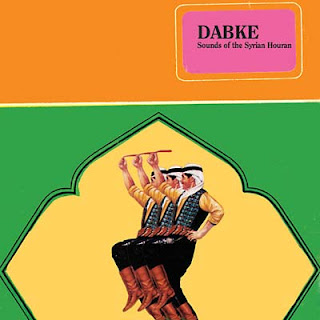 Here is how the label describes it:

Dabke is the celebratory music and dance found throughout the Levantine Middle East. By the mid-1990s, a new wave of high-energy electronic dabke music had emerged -- to be heard at weddings, parties and cassette-stalls region-wide. New wave dabke was first introduced to Western ears by way of Omar Souleyman and his northeastern Syrian sounds. This collection presents a hypnotic and diverse selection of electrified dabke dance cuts from a region in the south of Syria known as the Houran. The Houran refers to a swathe of south Syria and northwestern Jordan, beginning just below Damascus, and encompassing the Syrian cities of Daraa, Suweida, Bosra and the Golan Heights. Its populations include Syrians, Bedouin, Druze, Palestinians and Jordanians -- and this unique confluence of cultures is evident throughout these tracks. Hourani dabke is relentless and commanding, driven by heavy rhythms and weaving synthesizers. Long passages of intense musical fervor are punctuated by fierce male vocals, belting out calls for the audience to dance, alongside the lyrical laments and tributes to love and lust. But the sound of the Houran is best defined by the mijwiz -- a double-reed bamboo flute famed for its droney overtones as well as shrill, buzzing melodic lines achieved by circular breathing techniques. Historically, Hourani dabke was played with mejwiz, hand percussion and narrative vocal chants. Electronic beats have inevitably embellished the contemporary sound, magnifying the intensity -- and the mijwiz players have taken their craft to the microphone, in order to maintain the instrument's prominence over the resulting volume. The sampled mijwiz sound has its own specific qualities and in recent years, can even be heard in combination with its organic counterpart. The recordings featured in this collection were captured live to the mixing desk during weddings and parties throughout the Houran during the 1990s and 2000s, and represent a mere sliver of the sounds found in tape and disc vendors throughout the region. Proceeds from this release will be donated to the Syrian Arab Red Crescent (IFRC) to help support urgent humanitarian aid work during the ongoing crisis in Syria.

Order it here. If you're in doubt, you can listen first.

When I was in Beirut last month the hip-hop heads I met there were touting Lebanese rapper El Rass as one of the most impressive of the current crop. Rima Marrouch did a nice piece on him for the LA Times on March 30. Here are some excerpts: 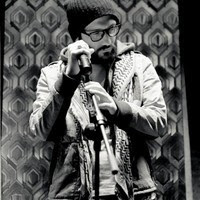 "His forte is the way that he is able to incorporate an understanding of nuance of language perhaps better than anybody," says Jackson Allers, founder of the U.S.-based Beats and Breath blog. El Rass, wrote Allers in the World Hip Hop Market website, "has emerged as a lyrical soothsayer for a new school of Arab hip-hop."

El Rass' signature style is an animated fusion of classical Arabic — an idiom seldom employed in rap — and contemporary wordplay gleaned from the Lebanese streets and elsewhere...

From his viewpoint, there is a kind of continuum of language and purpose from early Koranic verse to today's Arab-language MCs. The Arabic word taaliq (a commentary), he notes, has the same root as the word muallaqat, which refers to the first pre-Islamic poems.

"Arabs first wrote poetry, not prose[...][Reciting] the Koran is also close to what we do" as rappers.

...One of his favorite singers is Abida Parveen, a Pakistani singer well know for her interpretations of Sufi poetry.

...He is an equal-opportunity critic, lashing out at the Muslim Brotherhood, radical Islamists, Iran, Turkey, Gulf "tyrants," the United States and various Lebanese figures and mores, among other targets. Playing the part of disgruntled contrarian seems to suit him.

...His debut CD, "Kachf el Mahjoub/Unveiling the Hidden" (the title is from a Sufi master-work penned some 900 years ago), recorded with avant-garde musician Jawad Nawfal (a.k.a. Munma) was released last year on Ruptured, a Beirut-based independent record label. El Rass is working on tracks for a second album.

"My Arabic identity is a digital bedouism," he writes. "No nationalism, no nostalgia, only passion for creating our new identity. This is how I understand our revolution."

You can listen to El Rass here, on Soundcloud.


Do give a listen.

Here are some reviews of El Rass's first album.

Revolutionary Arab Rap provides a translation of the lyrics of El Rass' song, "The Volcano of Beirut," here.
Posted by Ted Swedenburg at 8:39 PM No comments:

Rachid Taha has a new album out, called Zoom. It's available in Europe, but not issued yet in the US. Not even on iTunes or emusic. Damn. Based on this track, it promises to be a good one. (I wasn't so taken with Taha's last outing, Bonjour.)

The song is a basic blues, and the basic lyric goes, "I don't have a passport, I don't have a visa, I have nothing baby." The typical lament of the undocumented migrant. Love it.

Posted by Ted Swedenburg at 12:14 AM No comments:

new one from Ramallah rapper boikutt

Palestinian rapper Boikutt (ex-Ramallah Underground, currently a member of Tashweesh and also a solo artist) contributes a terrific vocal on the Beatoven track "Falstaf," from the album Tangled (to be released on the 7th of May - or is it the 5th of July?).

Posted by Ted Swedenburg at 12:04 AM No comments:

Last August I posted a complaint about the vast discrepancy in Western media coverage and popular and celebrity solidarity between the case of Pussy Riot and that of Al Haqed. I've been ranting about the cases below on Facebook. A friend said I should consider asking the legions of Pussy Riot supporters and admirers to pay attention to these cases rather than mocking them for not doing so. So that's what I'm doing: Please, lovers of Pussy Riot (and I include myself in that camp), note these cases and publicize them, if you love music and the freedom of expression.

1. The Moroccan rapper Al Haqed (Mouad Belghouat) was released from prison on March 29, after serving a year's sentence for insulting a public official in his video, "Dogs of the State."

Predictably, not much publicity in the Western media. At least this from Huffington Post.

2. Sandy Tolan has been blogging about the 22 year-old Palestinian singer Oday Khatib,  who has been arrested and charged with throwing stones, which could send him to prison for up to 10 years. According to Tolan the evidence is ambiguous. Read about the case here. (The trial keeps getting postponed: the scheduled date is now April 17.) Nicola Perugini also reported on Oday for the LRB Blog. 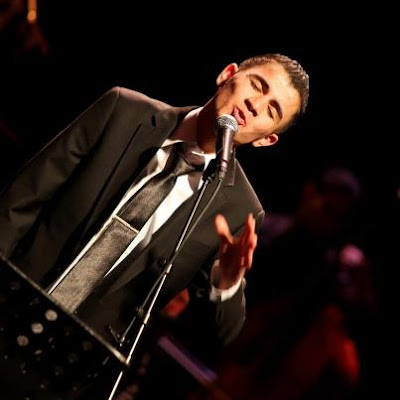 3. Amira Masrour reported on tunisia live that Tunisian actress Sabrine Klibi and cameraman Mohamed Hedi Belgueyed were sentenced on March 21 to six months in prison for defaming police officers and contributing to civil disobedience, through their role in the video "Cops Are Dogs" (Boulicia Kleb) by rapper Weld El 15 (Ala Yaakoubi). Weld El 15, who is on the run, was sentenced to two years in absentia. HipHopDX reports that Tunisian rapper Emino, who was thanked in the credits section at the end of the music video, also received a two year sentence. He's on the run too.

According to, Weld El 15, Masrour reports, the song was inspired by his prison experiences after the 2011 revolution and the treatment he received at the hands of the police. “‘Cops are Dogs’ is a song based on metaphors with which I wanted to send a message to policemen,” Yaakoubi said. “I wanted them to respect people so that people respect them.” 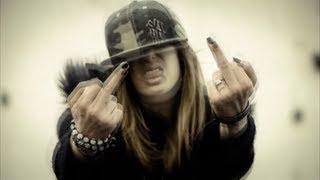 How about some solidarity from Ice Cube, a member of NWA? NWA's classic song "Fuck the Police" was massively condemned, and even prompted a letter of complaint to NWA's label, Priority, from the FBI director of public affairs. Cops throughout the country refused to provide security at many of NWA's concerts.

Or from Ice-T, whose group Body Count released the song "Cop Killer" in 1992. The song inspired so much outrage, ranging from President George Bush the First to various law enforcement agencies, that Ice-T felt compelled to recall the Body Count album and re-release it without "Cop Killer."

Both the Ice-T and the NWA cop songs are way, way more incendiary than Weld El 15's.

Where's the solidarity, folks?
Posted by Ted Swedenburg at 10:15 PM No comments:

Sheikh Jarrah and the Right of Return 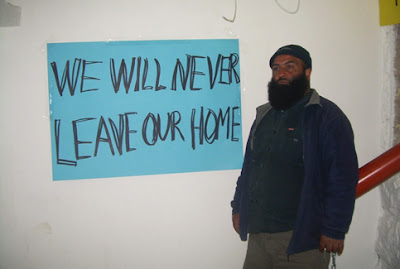 Posted by Ted Swedenburg at 9:16 PM No comments:

She recorded "Jamaican Ska" on her 1964 album, Annette at Bikini Beach.

I prefer the first, the more innocent, version.
Posted by Ted Swedenburg at 1:58 PM No comments:

"a mounting body of evidence has pointed to a growing distancing from Israel of American Jews, and the distancing seems to be most pronounced among younger Jews." BEYOND DISTANCING: Young Adult American Jews and Their Alienation from Israel, by Steven M. Cohen (Hebrew Union College – Jewish Institute of Religion) and Ari Y. Kelman (University of California, Davis). Download here.
Posted by Ted Swedenburg at 9:12 AM No comments: 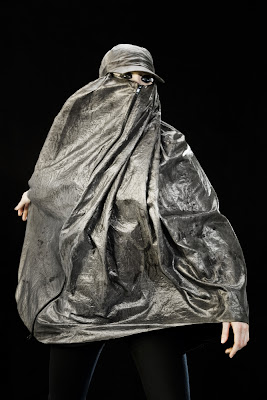 "the collection includes hoodies, hijabs, and burqas made with metallized fibers that reflect heat, thus evading the thermal imaging technology used by drones. The garments were created in collaboration with fashion designer Johanna Bloomfield and highlight Harvey's own anti-authoritarian leanings and qualms about the unbridled use of drones."
Posted by Ted Swedenburg at 9:33 PM No comments: