Kristoffer Larrson, writing in Counterpunch (April 21/22), tells us that the European Police Office's (Europol) first report on terrorism in the EU has just come out. According to the report, 498 "terrorist attacks" were launched in eleven EU countries, 136 by the Basque separatist group ETA which was responsible for the only attack resulting in human loss of life, in Madrid. Of these 498 attacks, "Islamic terrorists" were responsible for one attack.

Not what writers like Bruce Bawer (While Europe Slept: How Radical Islam Is Destroying the West from Within) and his ilk (Mark Steyn, Melanie Philips, and Oriana Fellaci) would lead us to believe.
Posted by Ted Swedenburg at 9:21 PM No comments:

Email ThisBlogThis!Share to TwitterShare to FacebookShare to Pinterest
Labels: Europe

Is this the best video clip of Arabic music ever?

UPDATE: As far as I can determine, from hunting around for more information, The Bendaly Family are Lebanese.
Posted by Ted Swedenburg at 8:16 AM 3 comments:

More on the kufiya from the Daily Star (Beirut)

It appears that a report in the New York Times two months ago triggered this Daily Star report, focusing on kufiya-as-fashion spottings in London and Beirut. The report claims that "the Jewish lobby" was responsible for Urban Outfitters' decision to pull the kufiya from its early spring catalogue. Unfortunate language, that errs on the side of anti-Semitism. More correct to say there was some Zionist-motivated pressures.

I've been informed by a couple of blog readers that one can still find the kufiyas in Urban Outfitters in New York and San Francisco. My student Chris wrote me in late March:

The Urban Outfitters in downtown San Francisco sells the turquoise, yellow, and green kufiyas, errr, "anti-war protest scarves," including having some on their "this is what the cool kids are wearing these days" display table right as you walk in to the men's section. They seem to have passed off their stock of the black & white and red variations to some of the local boutique resellers (where I myself picked up one), while the less controversial colors are still kosher for keeping America's hipsters warm and cozy, or at least in protest in a socially respectable way.

I found kufiyas in Urban Outfitters on 6th Ave in the Village. They had brown (bunni) and olive green (jayshi), both made in India and for $20. Also red/white, very poor quality, made (I think) in China. Not displayed prominently, but not any less prominently than other similar shawl-like items....

The sitings continue! (And once I finish the backlog of work that has piled up as the semester nears its end, I hope to resume more regular postings on hawgblawg.) 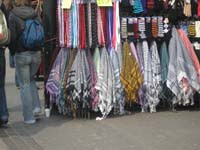 LONDON/BEIRUT: The keffiyeh has had a long and varied history. But few could have imagined the traditional headdress worn by Arab men to protect them from the sun and sand would emerge in the spring of 2007 as a fashion accessory among urban teenagers and twentysomethings in New York and London.

The white cotton scarf in an all-over checkered pattern has been worn for decades by men across the Levant and the Gulf. It became a potent symbol of Palestinian nationalism from the 1930s onward. The keffiyeh was a key component of Yassir Arafat's trademark attire; he was never seen in public without one. At least since the days of the first intifada, people around the world have worn the keffiyeh in sympathy with the Palestinian cause.

In the wake of the attacks of September 11, 2001, when all things Arab became suspect in the West, a young magazine editor in New York recalls that the keffiyeh he wore around his neck as a scarf for all seasons suddenly provoked anxiety. People would cross to the other side the street when they caught sight of his neckwear, assuming, stupidly, that he was a terrorist. How things have changed.

Fashion is nothing if not amnesiac and so the keffiyeh has somersaulted to a veritable hipster trend - minted as such with a recent story in The New York Times style section.

Weaving through the crowds of people bustling through London, one cannot help but notice the overwhelming number of passersby sporting the checkered scarf. Not satisfied with the original two options of red checks or black, market stalls and retail outlets have expanded the keffiyeh color range to include blue, purple, green, pink and yellow.

From Camden Market's stalls to high-street stores such as Top Shop and Urban Outfitters, the scarves are being sold seemingly everywhere.

In fact, the keffiyeh has been around Camden Market for years and has catered to customers "who support the Arab cause," says Helena, the owner of a market stall. "The last couple of months, however, have seen a huge surge in their sales," she says, "especially the colored ones, now that that they are being sold on the high street, too.

"They've lost their meaning completely now, though," she adds. "Before, people bought them for a reason. Now it is purely a fashion statement. They have no idea what the scarves signify. We have had a number of people come by and ask for 'those scarves that are being worn on TV' by celebrities." Helena says that for the past three months, she has been selling an average of 200 scarves per week.

Adam Faust, 25, is originally from Texas but is currently studying graphic design in London. He owns a yellow keffiyeh.

"To be perfectly honest," he says, "I only bought it because I liked it. I liked the style, and the look of it. It was a completely superficial decision. I did do a bit of research before I bought it, so I do know it has a Middle Eastern background. But that's not why I bought it."

Alicia Iveson, 22, is a student at Leeds University. She owns a keffiyeh of her own, but for variety, she often borrows others from her friends. She says the scarves are worn all over university campuses by people of all political persuasions, to the extent, she says, that the keffiyeh has "become a bit of a cliche."

"It's like anything that becomes fashionable," explains Iveson. "First the fashion-conscious people wear them to be different, and then everyone catches on to it, and eventually they go out of fashion."

While not ignorant of the keffiyeh's cultural roots - "I know it supports the Palestinians and their independence," she says - Iveson admits her reasons for buying and wearing the keffiyeh are completely apolitical. In her opinion very few people who wear the scarves are aware of their history.

"Personally, I just really like them. They're warm and practical in this weather. They look good, and from the right places they can be really cheap," she says. Hers cost $8.

Top Shop, one the UK's largest high-street fashion stores, has had the scarves on the shelves for the past month. According to a sales assistant who spoke on condition of anonymity, the scarves are "very trendy" and "worn everywhere, even in clubs."

"The people that tend to buy them the most are between 15 and 28, and like anything in fashion, now they are very popular, but they will have a limited shelf-life," he says. "I really don't think any of the population who buy them here actually knows what they represent, culturally."

Across the pond in the United States, however, the fashion statement made by the keffiyeh was quickly marred by politics. The Jewish lobby [sic: there is no "Jewish" lobby, there's a Zionist lobby, but it doesn't appear to have systematically weighed in.] in particular slammed the trend as an "endorsement of terrorism."

The style piece in the Times, published in February, noted that Urban Outfitters swiftly removed keffiyehs from stores after an onslaught of criticism. Urban Outfitters issued the following statement: "Due to the sensitive nature of this item, we will no longer offer it for sale. We apologize if we offended anyone. This was by no means our intention."

"I think it is ridiculous of the US to be so sensitive to an item of clothing," says Iveson. "This sort of behavior generates a feeling of hatred towards the area where the garment originally came from, and for no reason whatsoever."

"We are lucky that we live in a world where you can wear what you want, without anyone telling you otherwise," he says. "There is no reason why it should be taken off the shelves."

The sales assistant at Top Shop adds that banning an item for political reasons is not only ridiculous but also racist. "How can a scarf promote terrorism?" he asks.

Against expectations, the keffiyeh trend has simultaneously wangled its way back to the Middle East and into Beirut's trendy fashion boutiques.

Off the main street in Gemmayzeh lies Kitsch, a cafe and bakery that doubles as a store for a carefully handpicked selection of women's clothing. Among the resolutely chic styles of print dresses, thin leggings and vintage T-shirts, one finds a series of items by the label Essa that are embellished with the keffiyeh.

"The designer is based in Dubai," says Racil Chalhoub, the co-owner of Kitsch. "He wanted to design items that are linked back to tradition. They have been very successful," she adds, "probably because those who buy them consider them to be an original concept that cannot be found anywhere else.

"We haven't had any kind of negative feedback from people with regard to the use of the keffiyeh," adds Chalhoub. "Those that tend to buy the items are 'trend-forward' people who are looking for something new."

Politics, it appears, does not interfere with fashion, at least on the streets of Beirut.
Posted by Ted Swedenburg at 7:11 PM 1 comment: