Check out his video report here, and his article in the New York Times, yesterday, here.

The vid, with performance by Ibrahim Qashush (whose throat was cut soon thereafter) is here, with subtitles.

Note that the subtitles do not capture this: at about 2:30 the chanter says "ru7 sale7 7aref il S" which means go fix your pronunciation of the letter S, referring to Bashar's lisp! (Thanks to Yusef for this.)
Posted by Ted Swedenburg at 11:31 AM No comments:

No SCAF Rap: Message to Tantawi, by Ramy Donjewan

I've been complaining of late that the role of hip-hop in the "Arab" Spring has been somewhat exaggerated. I plan, or I should say, hope, to do a post on this later, once I've thought it through more. But I really like this rap, from Ramy Donjewan, that was posted today on youtube.

It's called "Message to Tantawi," and it is just that, a message to Field Marshal Mohamed Hussein Tantawi, the Commander-in-Chief of the Egyptian Armed Forces, the Minister of Defense, and the chair of the Supreme Council of the Armed Forces or SCAF, which has ruled Egypt since the departure of Hosni Mubarak on February 11. The message to Tantawi is in his capacity as the head of SCAF. The democracy movement in Egypt has become increasingly frustrated with the SCAF, and in particular, of late, its failure to prosecute effectively those responsible for the 800+ deaths at the hands of the security forces during the revolution. Donjewan articulates this, and other demands, and frustrations of the revolutionary movement.

I like this song's flow, its lyrics, the calculated urgency of the Donjewan. Its slow, measured beats, convey a sense of dread, and the simple, repetitive guitar playing adds to the effects. I especially like the chorus, which can be translated as: What we did at first we'll do again Tantawi if our demands aren't implemented. (It's very poetic and effective in Arabic.)

(Once again, I urge someone who can do it quicker and more effectively than me to translate the lyrics of this song.)

Donjewan put out a song right before the start of the revolution, called "Against the Government," that was quite fantastic as well. Check it out here.

The title of this post: No SCAF Rap, is lifted from the 3Arabawy blog, where I first learned about this song.

(Footnote: the wikipedia entry on Tantawi says he's of Nubian origin, but the sources for this claim are gone. Is this true?)

UPDATE (later the same day): Robin translated a bit more: "Oh Tantawi, my brother's blood is very dear, and we are not making threats... where is the right of the poor, the one who died?"
Posted by Ted Swedenburg at 6:53 PM 1 comment: 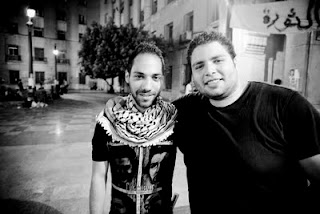 It's great to learn that some of the ultras are not just struggling for democracy in Egypt, but are also supporters of the struggle of the Palestinians. And please note the Che t-shirt.
Posted by Ted Swedenburg at 2:15 PM 3 comments: 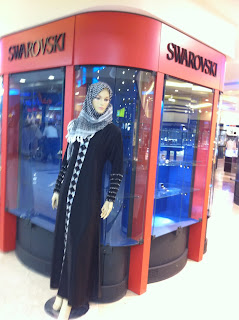 This is from Cairo airport, July 2011 (thanks, NT). You might think this represents an Arab woman in "traditional" fashion, but women don't usually wear kufiyas as headscarves. Swarovski is an Austrian company that produces lead crystal and other related luxury products, so this mannequin doesn't seem to have anything to do with the kiosk behind it.

Then there are these, from Mamlaka Shopping Mall, in Jedda, Saudi Arabia, January 2010 (thanks, EC). Very deluxe kufiyas, that have nothing to do with Palestine solidarity or any progressive politics whatsoever, and everything to do with elite Saudi identity. (The red kufiya, with white dishdash, is traditional Saudi dress.)  Kenzo, Lamborghini, Borsalino, Versace: very swank. Please get me a Versace next time you're in Jedda, won't you? 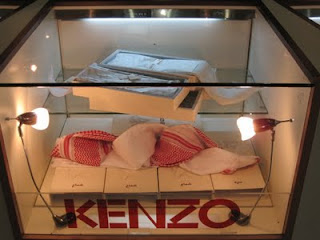 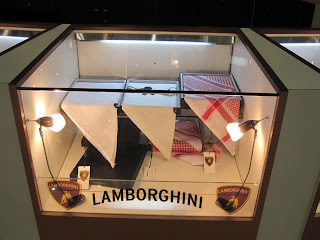 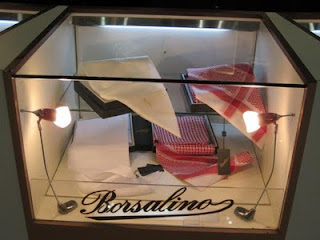 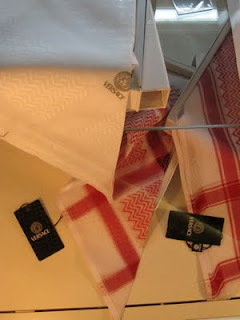 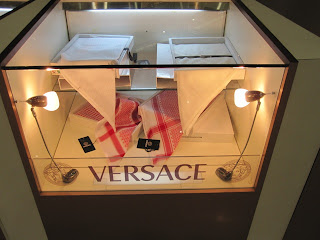 Posted by Ted Swedenburg at 1:44 PM No comments: 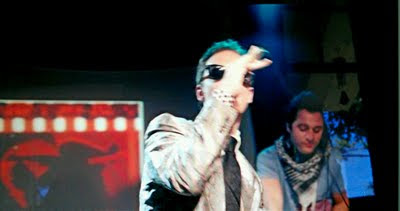 Nick (Michael Cera) and Norah (Kat Dennings) are on the track of a band called Where's Fluffy. They get to a NYC club, where everyone is waiting for the late-night appearance of Where's Fluffy. This band (Are You Randy) comes on instead. Everyone is disappointed, boos, and leaves. Except for one loser, who takes his shirt off and dances around like a loon. The fact that the deejay of the band (played by Sammy Marc Rubin) was wearing a cool kufiya didn't dissuade anyone from leaving.
Posted by Ted Swedenburg at 12:18 PM No comments:

Posted by Ted Swedenburg at 8:59 AM No comments: