Hillary supports apartheid wall; moderator of Church of Scotland sees it and is "gobsmacked" 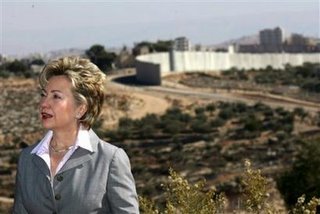 Senator Hillary has just visited Israel and toured a section of the apartheid wall, which the Israeli government calls the "separation barrier." Hillary reaffirmed her support for the wall, which the International Court of Justice ruled in 2004 was in violation of international law. The photo above shows her in front of the "separation barrier" at Gilo. The US press insists on calling Gilo a "Jerusalem neighborhood," but in fact, it is in fact an illegal Israeli settlement on West Bank land.

Meanwhile, the moderator of the Church of Scotland's General Assembly, David Lacy, has just spent two weeks in Israel and the Palestinian territories. After viewing the same wall that the Senator saw, he remarked,"when you actually see where it is, you see that it's not for security, it's for making political statements. It's theft of land and I don't know how you can justify it on the grounds of anti-terrorism." Lacy went on to say the barrier is "a huge, horrible, oppressive sign of distrust and hatred in the birthplace of the son of God"

David Lacy is, of course, much more in tune with reality, and with world opinion. As for Hillary, she is running for re-election (and of course has her eyes on the White House). This appears to require stating one's unqualified support for the state of Israel. As a UPI report put it, "U.S. Sen. Hillary Rodham Clinton is in Israel on a visit intended to put to rest any lingering doubts about her support for Israel."

Who had lingering doubts?

Tags: Palestine, Israel
Posted by Ted Swedenburg at 11:29 AM