My uncle's sixth birthday: Swedes and Japanese and Kingsburg, California 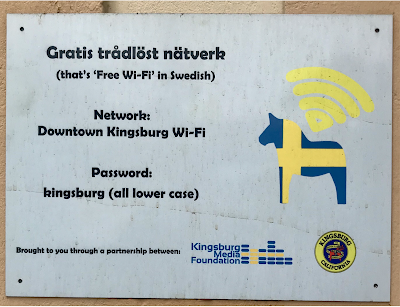 More on Kingsburg and Swedes and Japanese: Last month I made a trip to Fresno for my mother's brother's 90th birthday. I talked to him a bit about my mom and her Japanese classmates. A bit later someone asked him, do you remember any memorable birthdays from when you were growing up?

He said, we were on the farm, there were 8 kids, dad (Bertil) was really busy, so birthdays weren't usually a big deal. But for my sixth birthday (in 1937) dad said, you can do anything you want for your birthday. So -- and then he looked at me and said, Ted, you'd be interested in this -- I invited three friends over to the farm. He named the three, all Japanese names. (He still remembers their names, he is still as sharp as a tack.) We fooled around on the farm all day.
That's his memory of his best birthday as a kid, the day he got to play all day with his three Japanese-American pals.
Imagine: when he's 10, four and a half years later, his three pals are all sent off to be interned, as enemy aliens.
Today, Kingsburg is for the most part remembered as a Swedish town. So you see cute stuff like this downtown. Which, as a Swede, I love, but I am haunted by the ethnic cleansing that produced this singular memory of the town.
Posted by Ted Swedenburg at 11:39 AM No comments:

My mom and her Japanese-American classmates in Kingsburg, California 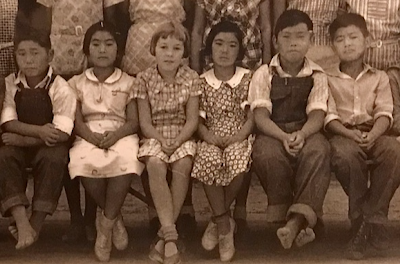 Kingsburg, a half hour south of Fresno, was settled mostly by Swedes, but by the twenties and the thirties it was basically a Swedish-Japanese town. Clay School was a bit out town, served grades K-8, and its clientele were mostly kids of farmers (like my grandfather) or farmworkers. (Note that two of the boys here are not wearing shoes.)

The school building was moved recently to the Kingsburg Historical Park, and I visited it a couple weeks ago with my cousin Dave and brother Ray. I have my mother's 1942 high school yearbook, the year she graduated, and I see that, of those pictured here, Kimiko Yoshida, Shizuko Matsuoko and Dobi/Robert Yano graduated with my mom. Shizuko ('Shiz') and Dobi ('Bob') signed her yearbook. Meaning that, after Pearl Harbor, they continued in school with my mom through graduation. That summer, 1942, they were all sent to internment camps.

I'll have more to say in a future post about Bob Yano, but I know he was interned at Gila River, Arizona, and not long after going there signed up to serve in the US Army. 'Shiz' was interned at Poston (Arizona), possibly the Yoshidas as well. I can't find a record for Tom Matsamura, probably because he is listed in the records under his Japanese first name.

After summer 1942, Kingsburg was no longer a Swedish-Japanese town. Very few Japanese returned there after the war. Today it is simply remembered, and commemorated, as a Swedish-American town.