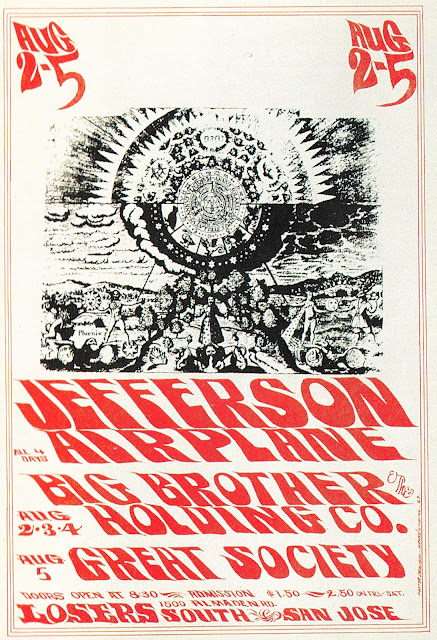 Early August 1966. I was 16, on "home leave" from Beirut with my family, staying with friends in Los Gatos, where we had lived before moving to Beirut in January 1964. I had friends in Los Gatos who played in a rock band (for the life of me I can't remember their name). The drummer was Randy Ritchie, who passed away in 2012. They took me along to the club, Losers South, in San Jose, on a few occasions, because they performed there on occasion. This was the first live rock show I ever went to in the US (I'd seen bands in Beirut, of course).

I don't remember whether it was the first night I went that I saw Jefferson Airplane perform. I was really blown away, I'd never heard anything like it. This was when Signe Toly Anderson was the female lead singer. She was to leave the band shortly thereafter, doing her last show in October 1966. The Airplane's first album, Jefferson Airplane Takes Off, was released in August as well, and I grabbed a copy and took it back with me to Beirut. Wish I still had it!

The opening band the night I went (not sure which of the dates) was Big Brother & the Holding Company. I have to admit that they were too loud and intense and I was not into them. This was less than two months after Janice had joined the band -- she first performed with them on June 10, 1966. Of course when I returned to the US in 1968 for college, I had seen the error of my ways, and I went to see them live that fall.

The one thing I remember about the show was that there was a go-go dancer onstage with the Airplane while they were playing. This was a common feature of shows in the early to mid-sixties but it went out of style with the rise of psychedelia. I think the presence of the dancer must have been something that the club management put on the program. I have to say that at the San Jose there was no flavor of the emerging psychedelic scene that was emerging 60 miles away in San Francisco. Check out this footage of the Airplane playing at the Filmore in 1966 -- there was no light show in San Jose, that's for sure. (The sound is not live, it's from the record, but you can see Signe Toly Anderson onstage.)


I found a blog post which has this to say about the Losers South club: "The venue never caught on, both because of the terminal unhipness of San Jose and the fact that Losers South was apparently notorious for not paying its acts (and no doubt, unlike the Avalon would not even give unpaid bands a kilo of weed)." Well, at least it was hip enough to book the Airplane and I got exposed! [Added 23 August: Another thing that was great about Losers South was that I was allowed in as a teenager, aged 16. There was no checking of ID. I didn't have one!] 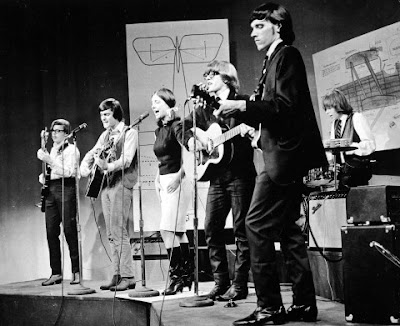 The poster -- which I now of course wish I had snagged -- was apparently designed by Stanley Miller ("Mouse") and Alton Kelley, whose most famous psychedelic poster work was for the Grateful Dead.
Posted by Ted Swedenburg at 12:02 AM No comments:

In the very fine documentary Nuh el-Hamam (Wailing of the Doves), 2004, directed by Amir Ramsis, 2006), we learn that the Port Said singer and simsimiyya player El-Sayed Abdou Mahmoud, known as El-Gizawy, appears in the 1964 film, Fatat al-Mina' (The Harbor Girl), which is set in a village on the Suez Canal. (That's him on the left.) 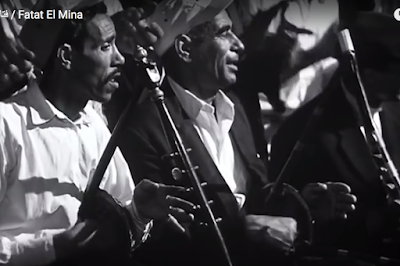 He tells us that he worked as an ironer (mikwagi) and that he used to sing at parties in the street -- the traditional way that simsimiyya music, known as damma, was performed at the time. He says he was contacted by director Hossam el-Din Mustafa to appear in the film, which stars Farid Shawki, Mahmoud El-Meleigy, Nahed Sharif, and Nagwa Fouad. He says that he sings on two songs, but I can only find one. The song starts at about 31:45. Check it out.


When the group El Tanbura was formed in late 1988 under the leadership of Zakaria Ibrahim, el-Gizawy was one of the veteran artists recruited to join the project of reviving the Port Said musical tradition that seemed to be dying out. He appears as a singer on all four of the group's albums. Sayed Gizawy passed away in October 2015. Allah Yarhamu.
Posted by Ted Swedenburg at 11:05 PM No comments:

In a previous post I wrote about Spanish dancer Blanca Li's connection with Hassan Hakmoun and Safia Boutella. Here is a bit from an article about Blanca Li by Luke Jennings that appeared in The New Yorker, April 28 & May 5, 1997, entitled "The Days and Nights of Blanca Li." The Etienne in question is Etienne Li, Blanca's partner, a Franco-Korean mathematician and graffiti artist who was posted to teach in Morocco in 1986.

Screen shots of the relevant sections: 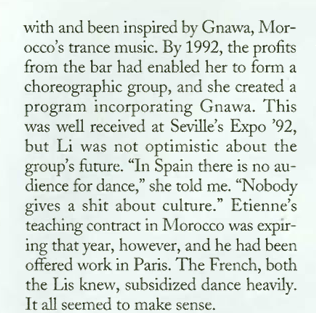 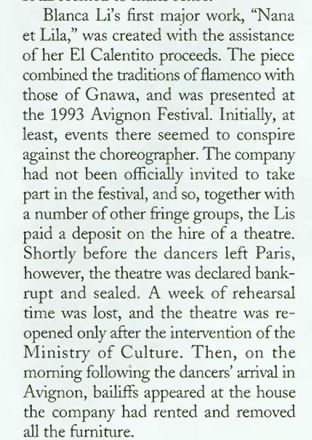 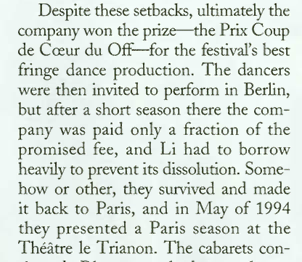 Here's a video of excerpts from "Nana et Lila." It looks and sounds quite remarkable. Damn it, I was at the 1992 Avignon festival, missed it by one year! The Gnawa who perform are Gnawa Halwa from Marrakesh, led by the terrific singer and guinbri player, the late Abdenbi Binizi, who I had the privilege of meeting in Morocco in 1999.

Here's a video clip of Abdenbi performing by himself:

And a photo of him with Gnawa Halwa. 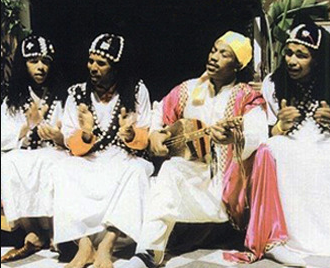 Posted by Ted Swedenburg at 12:28 AM No comments:

Mahraganat's march into the mainstream

I'm doing a lot of reading and video and movie watching on the topic of mahraganat for a writing project, and I thought I'd share this nugget.

In 2012 mahraganat artist Sadat was asked to compose a song for the mainstream film Game Over, released in June, a remake of the Hollywood release Mother-In-Law (starring Jane Fonda and Jennifer Lopez). The song, “Haqqi Bi-raqabti” (my right to my neck? -- help, please!)  appears in a scene where Egyptian film stars Yousra and Mai Ezzedine lip-synch it. The scene looks pretty fairly ridiculous, especially Yousra (at age 61) dancing and singing to the autotuned vocals of Sadat.

Sadat’s name does not appear in the movie credits. I learned this from watching Hind Meddeb's 2013 documentary, Electric Chaabi, which you can purchase from Amazon. I highly recommend it.

Very soon thereafter it would be hard to imagine mahraganat artists not receiving credit or anyone other than the artists themselves performing their own songs.

As a footnote, I love Yousra, especially in Mercedes and Al-Irhab wa al-Kebab.
Posted by Ted Swedenburg at 11:36 PM 1 comment:

Ben Ehrenreich's new book about Palestine, The Way to the Spring: Life and Death in Palestine, has been receiving rave reviews. I finally ordered it, and just started reading it. Only a few pages in, it's terrific. What really struck me on the first page was his description of how "Palestine has a way of enchanting people." He goes on to describe what hooked him. 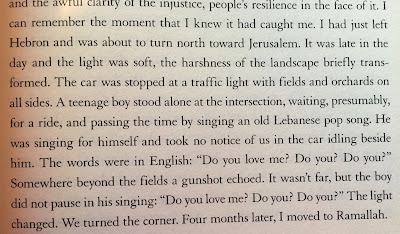 Yes, it was seeing and hearing a Palestinian kid singing that great number by the Bendaly Family, "Do You Love Me?" that captured Ehrenreich for Palestine.

Back in 2007 I did a post about the song called "Is this the best clip of Arab music ever?" Tongue in cheek of course, because the song is sung almost entirely in English, but also heartfelt, because it is great Arab music. And since then, a couple more posts, one with a bit more info about the Bendalys, and links to videos I particularly like, and another about a re-fix of the song by Dub Snakker.

Great to know that the Bendalys continue to be loved. And finally, go read Ehrenreich's book.
Posted by Ted Swedenburg at 10:36 PM No comments: 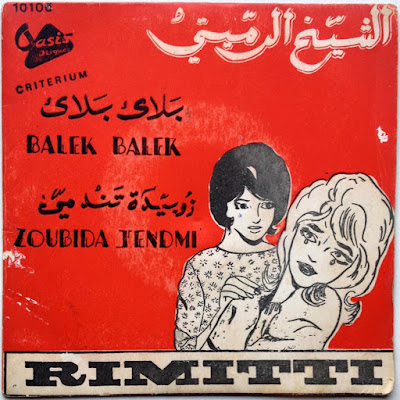 Isn't this great? First off, in Arabic the cover says al-Cheikh al-Rimitti, that is, the male form, and not Cheikha. And in Latin script, it says only "Rimitti." Now, it's not as if the record company (Oasis, based in Algiers) who put out this 45" didn't know who the artist was. The record itself says Cheikha Rimitti. 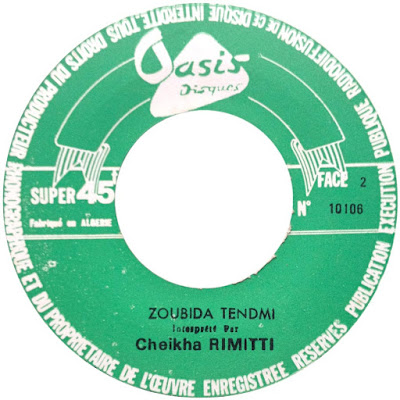 As does the reverse side of the record jacket. 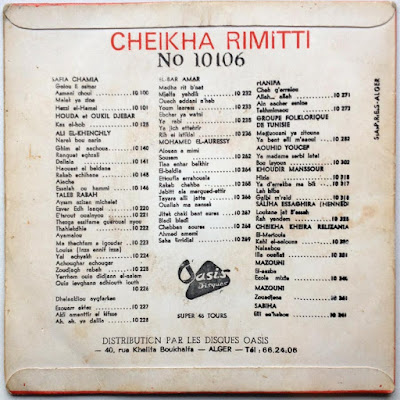 Was the record company trying to entice buyers by tricking them into thinking the recording was by a male singer? Who knows?

(The source for the cover is here, from Jeremy Phillips, who made a shopping trip for vinyl in Morocco in 2014, and posted a mix based on his findings on Psych Funk. You can listen to the B-Side of the Rimitti release, "Zoubida Tendmi." It's straight-up Algerian cheikha music, known at the time as elklâm elhezal.)

The other cool thing about the cover is that the illustration is a cartoon, not a photo. I've not seen a Cheikha Rimitti record jacket with a cartoon on it before, nor do I recall in fact other rai recordings or for that matter, other Algerian recordings with a cartoon. Other Cheikha Rimitti record jackets I've seen have photos, and with possibly one exception, photos that are not of the Cheikha but of another woman, usually blonde and Western. Like this one (from the Casaphone label, based in Casablanca and Paris). 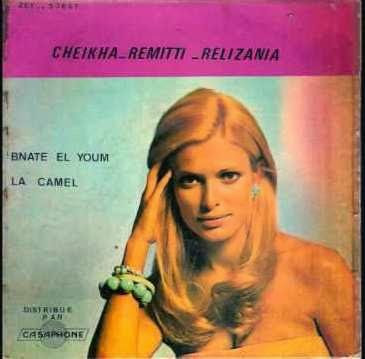 I did also find this recording, which features a drawing and not a photo. It's the jacket for "Ya Ouled El Djazaïr," also from Oasis -- but it's not a cartoon. This release, celebrating Algeria's independence, is from shortly after the FLN tossed out the French from Algeria, during the brief period of revolutionary ferment, when female artists like Cheikha Rimitti were not considered unrespectable, a period which ended in 1965 when Boumedienne toppled Ben Bella. You can listen to one version here, another here. I've no idea whether either of these are the original recording. 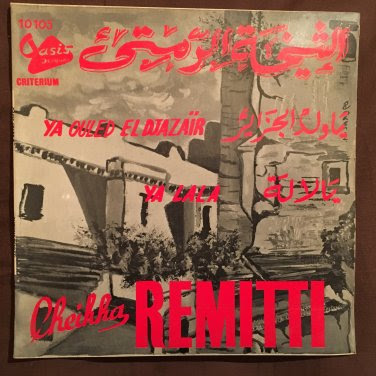 I posted about the "Balek Balek" record and someone commented that they had seen record jackets with the name "Cheikha Remettez" -- the spelling based on the story about how the cheikha got her name, ordering another drink at a saint's festival sometime in the 1940s. "Remettez la tournée," give me another drink. I'd love to see these.

And just for the record, I came across another photo of the Cheikha. She is the one with the tambourine. (I have to say, based on other photos I've seen, I'm not certain it is her.) The source is this blog post. 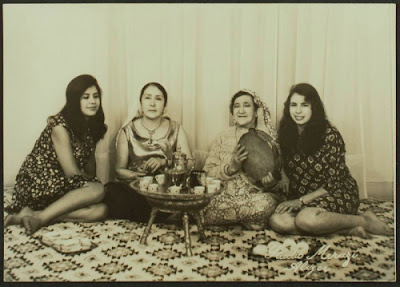 Posted by Ted Swedenburg at 10:22 AM No comments: