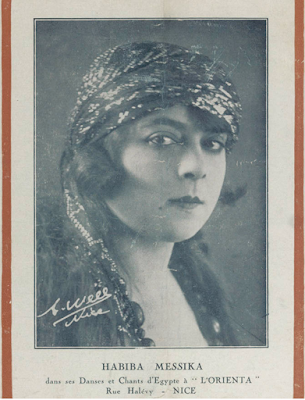 The invaluable Chris Silver has published yet another piece on Tunisian-Jewish singing star Habiba Messika, in History Today. What struck me about it in particular was what we learn about Messika's recordings for the Lebanese record label Baidaphone, headquartered in Berlin, in 1928. Messika was able to take advantage of the company's excellent recording equipment, but also, Silver informs us,

recording in Berlin had another advantage: she could do so away from the watchful eye of the French authorities. While she continued to make records with suggestive titles, like ‘Ala sirir el nom’ (‘On my bed, spoil me’), she also recorded a number of marches dedicated to King Fuad in Egypt, King Faysal in Iraq and the Bey of Tunis, Muhammad VI, as well as anthems extolling Egypt and Syria.

With Baidaphon, Messika seemed to strike a nationalist rallying cry. At the end of one such recording, ‘King Fuad’s March’, Messika and her orchestra could even be heard shouting ‘Long live the King’ and ‘Long live Egypt’ alongside thunderous applause. Hearing of Egyptian sovereigns and sovereignty, Tunisians could imagine their own. This record and others in a similar style would be her most popular in terms of sales. That popularity quickly drew the attention of French officials.

Three months after Messika's tragic murder in 1930, Silver informs us,

French officials in Morocco began receiving urgent messages from civil controllers across the country. Messika’s records – purchased widely and listened to in communal settings like cafés – were stirring up nationalist feelings. Intelligence agents found Moroccans singing along to Messika’s music, ‘in-sync with the phonograph’, while accompanying themselves on oud. In response, French authorities imposed draconian policies to slow the import of, and soon ban, Messika’s discs across the Maghreb.

What I wanted to add to Silver's discussion about Baidaphone and French authorities is that French colonial authorities' worries about the company's recordings only increased during the 1930s.

A bit later in the decade of Messika's death, colonial police became further alarmed by the travels undertaken during the 1930s in France's North African colonies by “Doctor” Michael Baida (who founded the company with two brothers and two cousins 1906). Accompanied by his German sound engineer, Baida signed recording contracts with local artists and established a network of distributors for the company's discs. The colonial police suspected the “doctor” of being a German agent, but they were never able to tie him directly to any political activity. But so concerned were the authorities about the role of imported music in the spread of dangerous ideas that in 1938 they forbade the import into Algeria of records in any “foreign” languages (including Arabic), and the French Army banned all Baidophone records from the cafés maures it used to hire for the purpose of entertaining “native” troops in North Africa as well as in France (Rebecca Scales, “Subversive Sound: Transnational Radio, Arabic Recordings, and the Dangers of Listening in French Colonial Algeria, 1934-1939.” Comparative Studies in Society and History 52(2):398-399, 414, 2010).

The move made by the French authorities in 1938, of course, was motivated in part by the fact that since Messika's death, the Nazis had taken power in Germany, where Baidaphone was headquartered and where Michael Baida lived (in Berlin). And no doubt the Nazis had no problem with Baidaphone's promotion of recordings in Arabic that were critical of French or British colonialism. How interesting it is that, prior to the rise of the Nazis, a Jewish-Tunisian artist played an important role in Baidaphone's subversive music production.
Posted by Ted Swedenburg at 11:21 PM No comments: 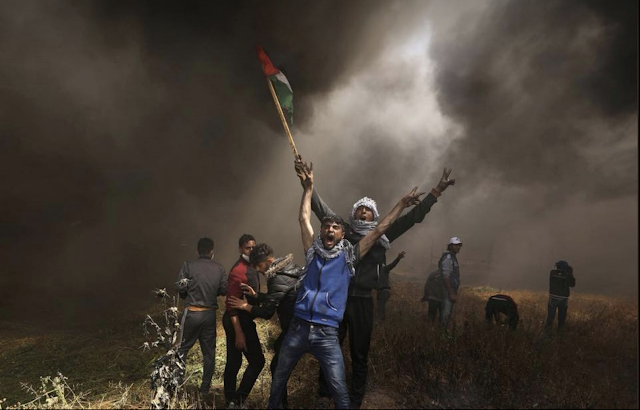 I think this photo, by Mohammed Salem of Reuters, is the best I've seen from the recent Gaza events, the state-sponsored mass shootings in response to Palestinian protests. Click on it, fill your screen with it. I posted the photo on Facebook and one of my friends observed that it was like a Delacroix painting. It's from Friday, April 6, the second big day of the weekly rallies of the Great March of Return, when protesters burned tires to try to hinder the Israeli snipers posted at the border, who killed at least 20 people and wounded hundreds on the previous Friday. They were only partially successful: the snipers took out 9 more on the 6th.

The photo, I think, shows the indomitable spirit of the Gaza Palestinians who live in a huge open air prison, with very limited access to the outside world, whether coming or going, with massive unemployment, very degraded water resources, etc. Note that these protesters are unarmed. Note their youth, And note, of course, the inevitable kufiyas. Long Live Palestine.
Posted by Ted Swedenburg at 3:10 PM No comments: