Kufiyaspotting: Asia Argenta at the Women's March in Rome, January 21, 2018 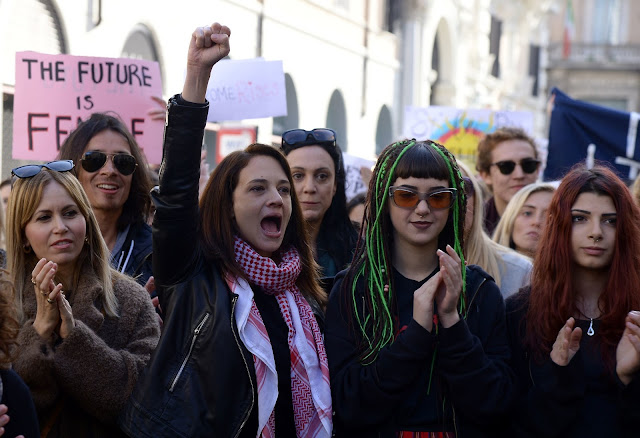 This is the photo of actress and director Asia Argento that appeared in the New York Times report on the millions who demonstrated in the Women's Marches around the globe, on January 20 and 21, 2018.

Argento is one of many actresses who have complained about being sexually assaulted by movie mogul Harvey Weinstein. Her complaints have not been well received by the Italian mainstream, but the New York Times reports that Argento was welcomed enthusiastically by the women at the Rome demonstration.

I don't know anything about Argento's politics, but her current boyfriend is Anthony Bourdain, who did a segment of his TV series Parts Unknown in the West Bank and Gaza Strip in 2013. In 2014 he expressed public criticism over Israel's assault on the Gaza Strip. I assume Argento isn't wearing a kufiya just to be "stylish."
Posted by Ted Swedenburg at 6:46 PM No comments: