The Egyptian Revolution: Cleansing the Country

Check out this amazing and heartwarming video about a wave of national pride in revolutionary Egypt. Teams of volunteers cleaning up the streets around Tahrir Square.
Here's a kufiya clad volunteer street cleaner. 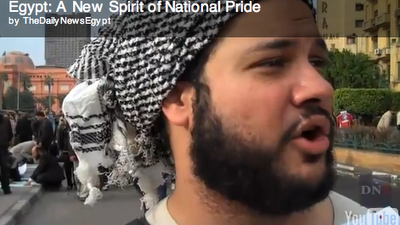 Free medical care offered by health professionals. Passing out food.
This really is something to be scared of: people power.
Posted by Ted Swedenburg at 9:21 AM No comments: 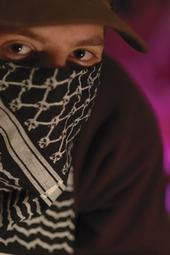 Free and timely download from the doom-crust punk band Al-Thawra, out of Chicago.
Al-Thawra says on their blog: "In celebration of the wave of revolutions spreading rapidly across the Middle East, we're proud to be giving away our song, "Wine of Power" for free download. We hope that song's lyrics of self-empowerment are something that everyone, everywhere can relate to, and hopefully something that everyone can also take inspiration from. In some ways, its anger and passion are a sign of the times..."

And check out their blog here. Al-Thawra is sometimes linked to the taqwacore scene. I really like their music. They are very fond of kufiyas.
Posted by Ted Swedenburg at 11:03 PM No comments:

Kufiyas in the Egyptian Intifada 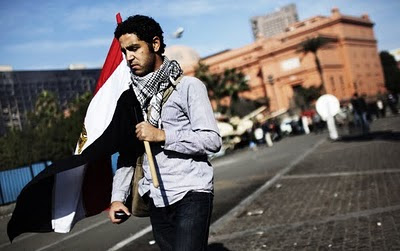 This is a footnote to the bigger story going on. Or maybe it's not just a footnote. I never saw many kufiyas when I lived in Cairo, between 1992-1996. Checking out footage on Al Jazeera, the youtube videos, and the photos, of the ongoing Egyptian Uprising against the Mubarak regime over the last several days, I've spotted many, many kufiyas. So many that I've not even bothered to try to put together a collection.
What do they signify? Solidarity with Palestinians? The influence of Western hipster fashion? A resurgence of secular pan-Arab identity, that several observers have noted? I think it's all three, and probably others that I can't think of right now.
In any case, here's a photo that I very much like, from a post on the blog of The Economist. (It's not credited to any photographer.) It seems particularly iconic. A young Egyptian male (the youth have played a critical role in organizing and activizing the uprising--although all segments of society have participated). He's carrying an Egyptian flag (signs of nationalism have prevailed over assertions of religious identity in this intifada). A cellphone is in his right hand (mobile phones & tweets & text messages have played a significant part in the movement, so critical in fact that the Egyptian government cut all cell service on February 27). He is walking in Tahrir (Liberation) Square, the focal point of the movement (although significant mobilizations have occurred all over the country, Tahrir, for all kinds of historical, cultural, and spatial reasons, remains very critical). The Nile River (Egypt's lifeblood) and the Egyptian Museum (the repository of the country's antiquities) are in the background.
And a black-and-white kufiya is draped around his neck, sign of global style, Palestine solidarity, and pan-Arabism.
Long live Egypt and its courageous and humane people.
Posted by Ted Swedenburg at 10:00 PM No comments:

Yes, the kufiya. Check out Bill Cunningham's "On the Street" piece in today's Sunday Times, his report on men's fashion on the move, in winter, in Manhattan. 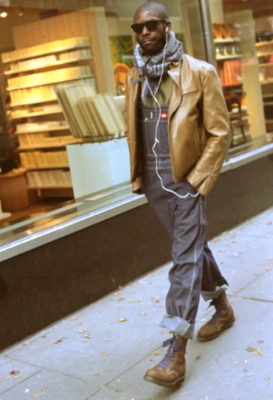 Very stylish, don't you think?
And still very available for wear on the Arab street, in protests in Jordan, Egypt, Tunisia.
Posted by Ted Swedenburg at 1:49 PM No comments:

As Charles, who alerted me to this, remarked: if this were Iran, the US and European media would be all over the story.
Here's what Reuters writes about the story (via al-Arabiya), Friday, Jan. 7:
TUNIS (Reuters)
Tunisian police have arrested a rap singer who released a song critical of government policies as protests against President Zine al-Abidine Ben Ali's rule shook the North African nation, his brother said on Friday.

"Some 30 plainclothes policemen came to our house to arrest Hamada and took him away without ever telling us where to. When we asked why they were arresting him, they said 'he knows why'," he said.
Ben-Amor is known to fans as The General. Last week he released a song on the internet titled 'President, your people are dying' that talks about the problems of the youth and unemployment.

The song came out as students, professionals and youths mounted a series of protests over a shortage of jobs and restrictions on public freedoms.

The protests have grown into the most widespread and violent flare-up of dissent of Ben Ali's 23-year rule.

Security technology company Sophos said on Monday that "hacktivists" from a group calling itself 'Anonymous' had struck some official Tunisian websites, including those of Ben Ali, the government and the Tunisian stock exchange.

Tunisian officials had no immediate comment on either arrest.
I've only just been turned onto this website, featuring rap music from the Tunisian city of Bizerte. Check it out.
And here is more on El Général's arrest here, from al-Jazeera.
And...here is a translation of the opening of the song, courtesy this post.

“Mr President, today I speak to you in my name and in the name of all the people who live in suffering and pain. This is 2011 and yet, there are people who die in hunger, while others still look for a job to survive. But their voices are unheard…”
Posted by Ted Swedenburg at 8:03 PM 1 comment: