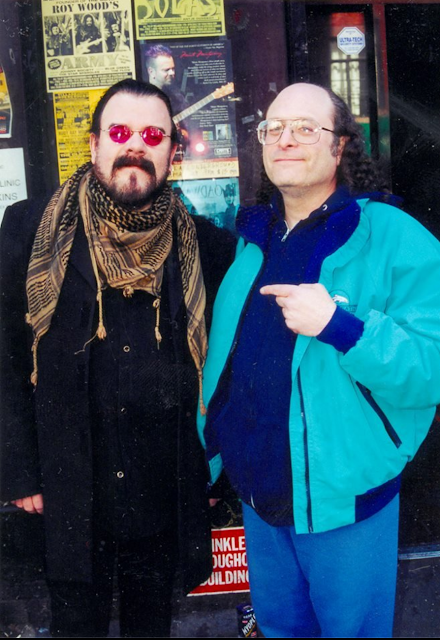 Roy Wood (The Move, Electric Light Orchestra, Wizzard) sporting a kufiya, at The Village Underground, New York, March 2002. Shared at thetradersden.org by member El Reet. Courtesy my pal Tim. (Not sure who the guy on the right is.)

Posted by Ted Swedenburg at 8:19 AM No comments:

Me at the George Floyd rally in Fayetteville

Somehow I made it into the front page photo for the Northwest Arkansas Democrat-Gazette's reporting on the George Floyd rally in Fayetteville, held at the Town Square on June 2, 2020. In case you couldn't tell, that's me on the far left. My t-shirt says: Abolish ICE, and it's from DSA. 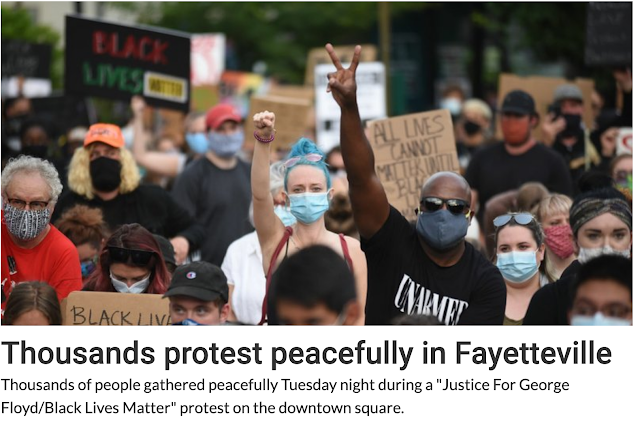 Posted by Ted Swedenburg at 2:50 PM No comments:

Cover of the June 21, 2016 of The Village Voice, whose Murdochization and eventual shuttering I very much regret. 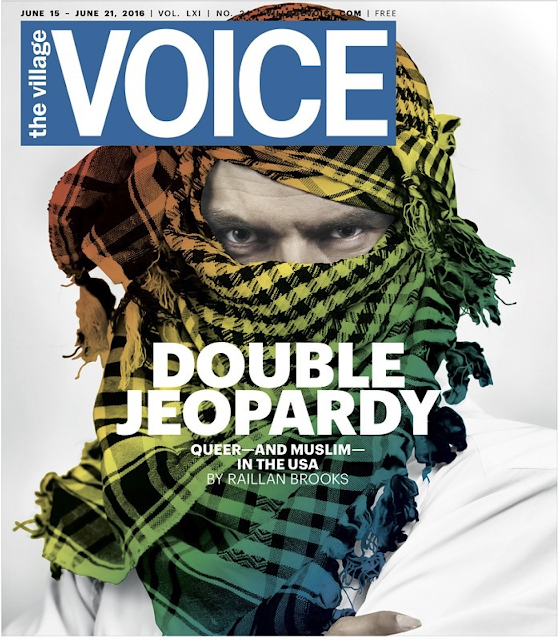 Posted by Ted Swedenburg at 12:51 PM No comments:

I grabbed this off of twitter in November 2019, and I can't find the original tweet, sorry. Zeina Ashrawi Hutchison is a Palestinian American and a Bernie Sanders 2020 VA State Delegate & National Delegate to the DNC. I'm pretty sure she's got her son on her shoulders. 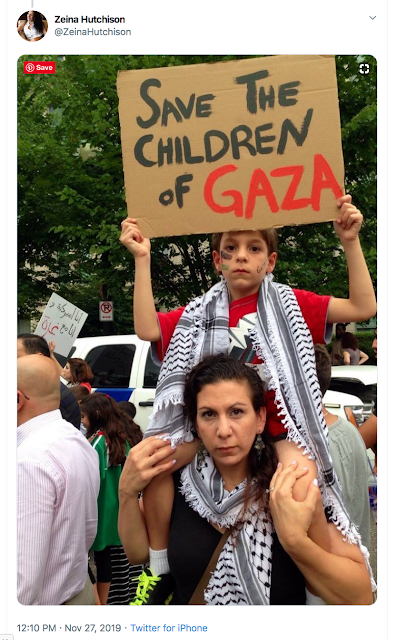 Posted by Ted Swedenburg at 12:43 PM No comments: 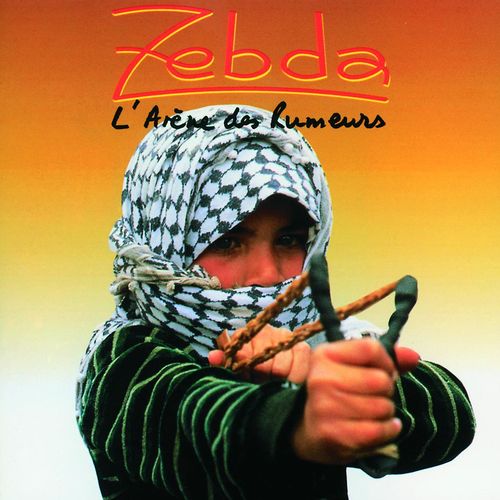 The cover of the 1992 release from the great French band, Zebda. Released during the height of the Palestinian intifada. David fighting Goliath, 1992.
Their name, Zebda, is Arabic for butter, or "beur" in French. "Beur" is slang in French for those of Arab background. The band is multi-ethnic, but its vocalists are the Beurs Magid Cherfi, the band leader, plus Hakim and Mustapha Amokrane.
For a flavor of the band, check out the first track from the album, "Arabodub."
Posted by Ted Swedenburg at 12:46 PM No comments: 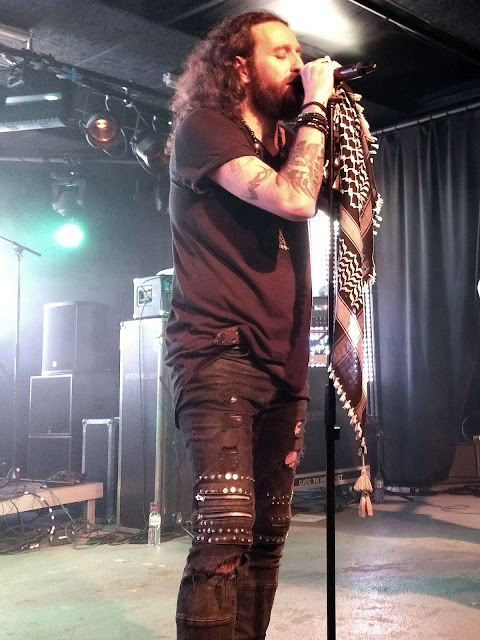 Orphaned Land were founded in 1991, led by Jaffa-born singer Kobi Farhi. Mark Levine discusses them in his book Heavy Metal Islam, and he calls them an "Oriental death-doom metal" band. Their orientation is very much about peace, and according to Levine, they have lots of fans in the Middle East outside of Israel. Kobi is Ashkenazi, the band's lead guitarist until 2014, Yossi Sassi is Mizrahi (Libyan-Iraqi). Given their political orientation, I don't regard this use of the kufiya as appropriation, but rather a signifier of solidarity/identification with Palestinian/Arab culture. I'm not much of a metal head but I respect Mark Levine's opinion about their virtuosity. Here is a YouTube video of one of their songs, to give you  flavor of what they do.

Posted by Ted Swedenburg at 7:29 PM No comments:

I'm sorry, I didn't keep track of the source, but the first image has been posted via rightwing websites and social media outlets. It's interesting, as it combines imagery of the USA patriot of 1776, in his tricorne cap, with the kufiya, often worn by rightwing militia types in the US, as I've documented in previous posts. The second image (again, I didn't keep good records) shows some armed men, exercising their 'free speech' rights not to wear masks and to carry guns in a USA café, spring of 2020. 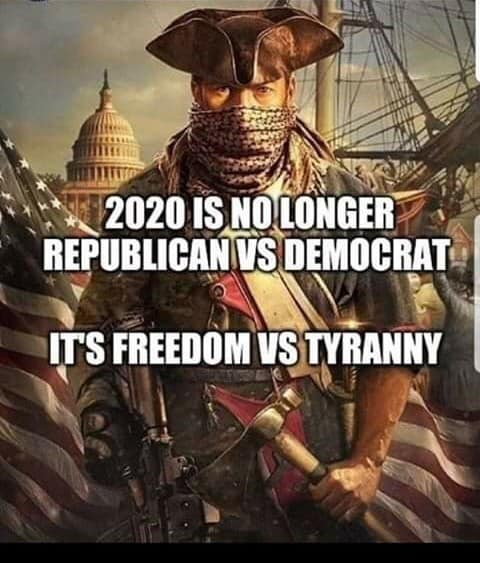 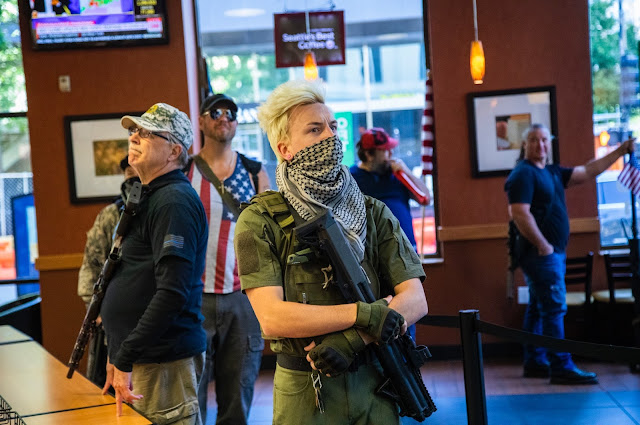 Posted by Ted Swedenburg at 10:00 PM No comments:

Someone finally told me about this.

It appears from the images I've looked at that Tim Minchin was always garbed in a black-and-white kufiya scarf for his role as Judas Iscariot in the 2012 revival of Jesus Christ Superstar.

I guess the kufiya must have figured as a negative marker? I don't know, I've not seen the show. In any case, here are a couple photos of Minchin in his Judas role. 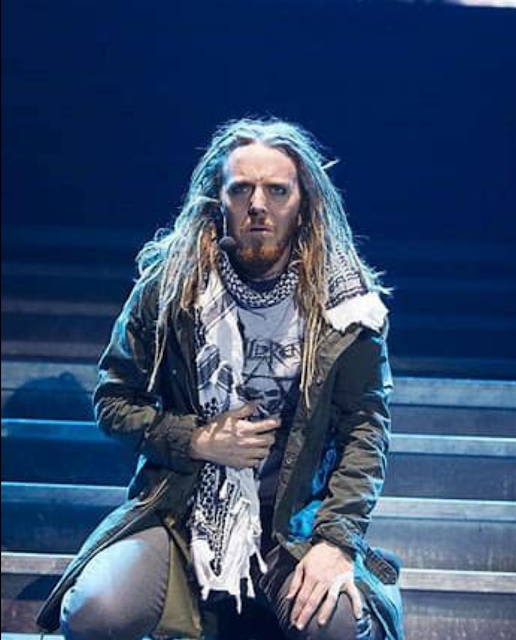 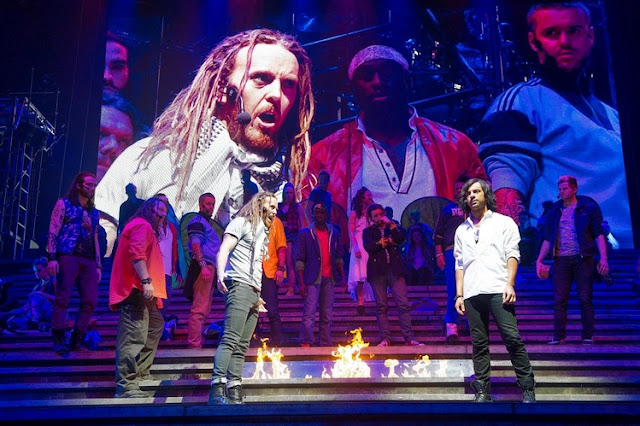 Posted by Ted Swedenburg at 9:48 PM No comments: 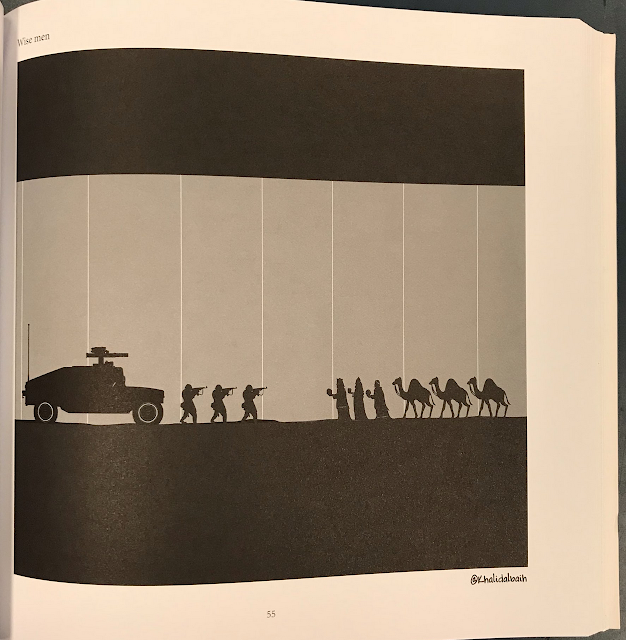 From his book, Khartoon.
Posted by Ted Swedenburg at 9:37 PM No comments: 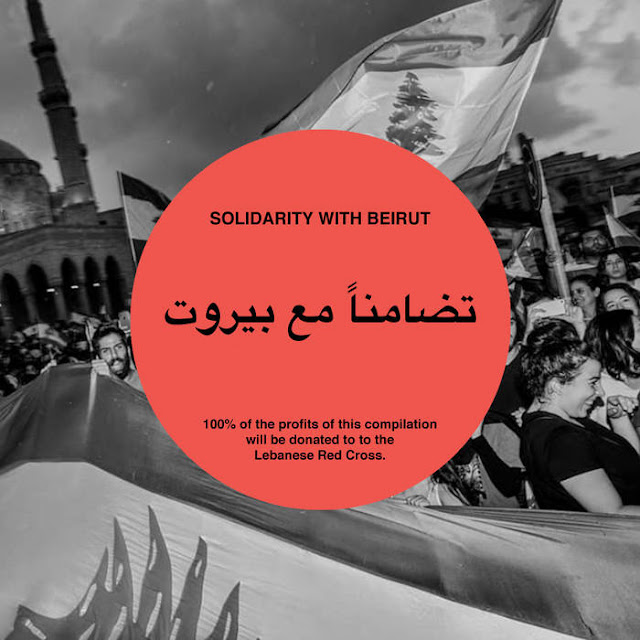 Habibi Funk is offering some rare tracks by Lebanese artists, with 100% of the profits going to the Lebanese Red Cross. This is a great chance to get your hands on some rare and very good Lebanese music and help out Lebanon, which very much needs our assistance. Music by Rogér Fakhr, Ferkat El Ard, Toufic Farroukh, Munir Khauli, Abboud Saadi and Force. To download, and to read more about the musicians, please go here.

And in case you want to donate straight to the Lebanese Red Cross, go here.