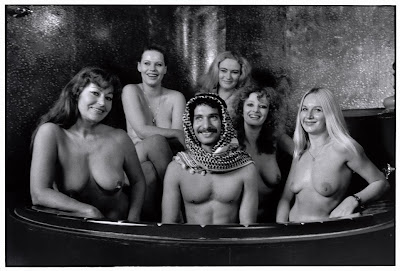 This is quite random -- I found this via an article in the latest New York Review of Books. This is the source. The photographer is the well-known Elliott Erwitt, who is known for photographing absurd, but at the same time 'everyday,' black-and-white photos. Here's wikipedia on Erwitt, and you can also check out his Magnum site. I don't know exactly what to say about this photo. What's this guy doing with a bunch of topless girls in a hot-tub in Amsterdam in 1982. Is he supposed to represent the stereotypical rich Arab? Is this a rendering of free-wheeling Amsterdam? What is it?

Anyway, you know why it's here. It's that kufiya.

Posted by Ted Swedenburg at 8:51 PM No comments:

I'm really glad that there has been such an outpouring of support for the three members of Pussy Riot who were convicted yesterday of charges of hooliganism motivated by religious hatred, and sentenced to two years imprisonment each. Everyone is all over this, Amnesty International, the major news media, and US pop musicians are falling all over themselves to express their solidarity. Most notably, of course, Madonna. The fabulous J.D. Samson (Le Tigre, MEN, Peaches and the Herms) was on Democracy Now! yesterday to make the pitch for Pussy Riot, stressing that they are a feminist band.

But why has Moroccan rapper Al Haqed ('sullen/rancorous/enraged one'; born name, Mouad Belghouat) not garnered 1/100th of the attention that Pussy Riot has received? Al Haqed was sentenced in May to a one-year prison sentence for insulting the Morrocan police. Meanwhile, as Mark Levine has noted, the likes of Lenny Kravitz, Pitbull, Khaled, Mariah Carey, Scorpions, LMFAO, and Evanescence all played the Mayazine Festival in Rabat, Morocco in May. Not one said a word in support of Al Haqed. Joan Baez (!) and Bjork played the Sacred Music Festival in Fez in June. Didn't mention his name.

In July Al Haqed launched a 48-hour hunger strike to protest his conditions of detention. I didn't hear any messages of solidarity from our progressive musicians.

Here are a few possible reasons that the likes of Madonna haven't shown up to express solidarity with Al Haqed and outrage at the Moroccan monarch.

1. Morocco's King Muhammad VI is a strategic ally of the West.

3. The Moroccan regime has successfully sold itself as a "moderate" government in contrast to those radical Islamist trends.

4. The Moroccan state has very effectively used its massive Festival industry and its tourism industry to sell its moderate image. The Mayazine and the Sacred Music festivals (plus the Gnawa Festival at Essaouira) are key elements in the selling of this image. Levine calls it "art-washing." Aomar Boum recently published an excellent piece on the regime's use of festivals in Middle East Report. Waleed Hazboun in his book Beaches, Ruins, Resorts: The Politics of Tourism in the Arab World shows how Tunisia was able to use tourism in the same way (see my review here.)

5. As Gene Lyons remarked on Facebook, people really seem to get a charge out just saying "Pussy Riot."

9. Pussy Riot is a feminist band. Al Haqed is an Arab Muslim guy. And he is angry.

10. We can't understand what Al Haqed is saying. Of course, we can't understand Pussy Riot's Russian either, but it's been widely translated. And people like JD Samson can read their lyrics on Democracy Now! (Of course, if anyone tried a little bit, they could have found a translation of one of Al Haqed's songs at Revolutionary Arab Rap.)

15. Morocco is so cool, man. Didn't Paul Bowles and Brion Gysin and William Burrough say so? Don't harsh on my mellow.

End of rant. You add your own reasons. I leave you with the offending video from Al Haqed. "Klab al-dawla." The dogs of the state. Why doesn't Madonna like this vid?

Syria's drought and the uprising

From the Bulletin of the Atomic Sciences. Read the rest here.

The drought in Syria is one of the first modern events in which a climactic anomaly resulted in mass migration and contributed to state instability. This is a lesson and a warning for the greater catalyst that climate change will become in a region already under the strains of cultural polarity, political repression, and economic inequity.

Meanwhile, let's just frack away in the good old USA.

"Over its lifetime an average well requires 3 to 5 million US gallons (11,000 to 19,000 m3) of water for the initial hydraulic fracturing operation and possible restimulation frac jobs." (wikipedia)
Posted by Ted Swedenburg at 10:44 AM No comments:

Read about them here. Too bad the CD/LP is sold out.
Posted by Ted Swedenburg at 8:52 PM No comments:

Invaluable resource from Haggai Matar at +972. Check it out here.

And check out Pink Floyd, reunited to raise money for Palestinian children, playing
"Another Brick in the Wall." Hoping Foundation fundraiser, July 11, 2011.


For the whole concert -- with better audio -- go here.
Posted by Ted Swedenburg at 11:38 AM No comments: 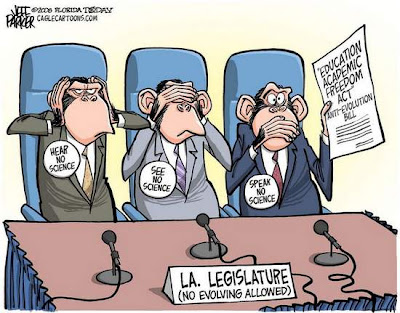 The wonders of Jindal, ever willing to fuel the desires of Tea Party anti-big government creationists to feed at the public trough.

At Northlake Christian High School, 18 voucher students will be taught “a creation worldview of life origins” according to the curriculum of the biology teacher. Slated to receive $375,000 in voucher payments, the Northlake teacher has rejected fossil evidence of evolution on a website, stating that such evidence is incompatible with the Bible. 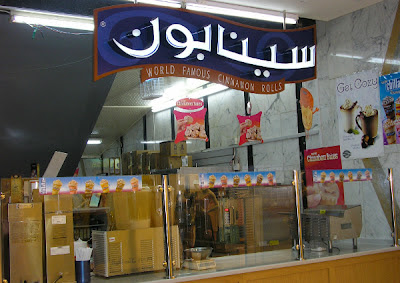 Now I understand why NPR was so excited about Cinnabon in Tripoli. Because they were hoping Libya would now become "free" just like Asad's Syria. (Cinnabon opened in Damascus in 2007.)
Posted by Ted Swedenburg at 7:43 PM No comments: 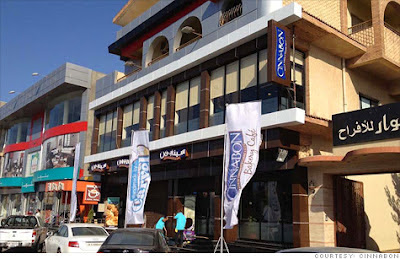 NPR's Morning Edition seemed very excited today that Cinnabon had opened a branch in Tripoli, Libya. They didn't get all Thomas Friedman about it, but they didn't have to. The fact that it functioned as a symbol of "freedom" went without saying. Given, I guess, that Friedman had already commented on the food in Libya (Benghazi) back in May 2011, and told us: "The pizza, too, is respectable, especially at Pisa Pizza in Benghazi, where the pies are about a yard in diameter. Proof that Italian colonialism accomplished something after all." (Sarah Carr penned an unforgettable spoof of Friedman's piece here. Thanks for the reminder, John.)


In April, the trade group led a delegation of 20 American companies to Libya to discuss business opportunities...


"In the new Libya, people are seeing franchising as an opportunity to become entrepreneurs," said Dittrich.


"This is one of the questions I get asked most," he said. "When are American franchises coming to Libya?"


Back in May 2003 (shortly after the Green Zone was up and running, under the supervision of the twenty-something apostles of neo-liberalism) the inimitable Zippy had this to say about what it would mean when Damascus finally had its Krispy Kreme outlet. (Thanks, Walid.)

It's pretty amazing that, despite all the evidence to the contrary, despite all the ridicule from the likes of Sarah Carr and her ilk, Friedman continues to promote his McDonald's Doctrine, according to which no two countries, once they have the Golden Arches, will ever go to war with each other (The Lexus and the Olive Tree).

I remember when the world changed, forever, when Krispy Kreme finally arrived here in Arkansas. Janet Huckabee, the wife of the gov, was present for the opening of the first franchise in Little Rock in February 2004. I'm pretty sure she was in Bentonville later that year for the Krispy Kreme opening there, and I think the cars lining up for the donuts were backed up all the way to I-540. But I can't find any articles on the internet. You'll just have to trust my memory.

In any case, just like the Tripolitans, we in Northwest Arkansas were really and truly glad to enter the flat world of freedom.

Posted by Ted Swedenburg at 6:16 PM No comments: