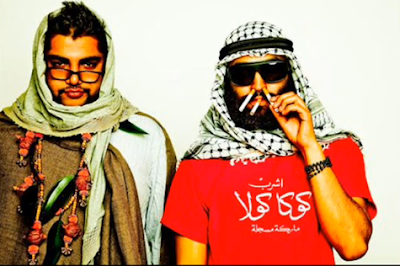 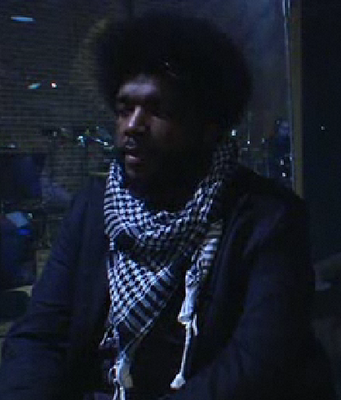 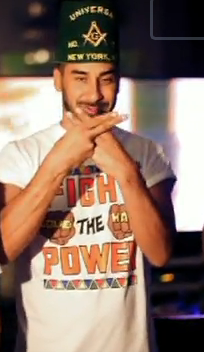 And RZA of the Wu Tang Clan shows up throughout the Vampire Weekend "Giving Up the Gun" video (#4) as the tennis umpire. RZA is a member of the Nation of Gods and Earths (Five Percenters). You've read my article about the Five Percenters here. And I've told you about THE book about the Nation, by Michael Muhammad Knight's The Five Percenters: Islam, Hip-hop, and the Gods of New York.
RZA and the rest of the Wu Tang are from Shaolin (Staten Island). I was born there too. That about ties it all together.
Happy New Year!
Posted by Ted Swedenburg at 7:34 PM 3 comments:

Kufiyas in the mainstream: "Glee," "Running Wilde," and Superchunk's "Digging for Something"

The kufiya, it seems, is now securely lodged in mainstream US cultural discourse. Like all signifiers, its meanings are not fixed, but are polyvalent. Here are three recent examples of the kufiya's appearance in US pop culture, which I attempt to decode.
1. Mercedes in Glee, Season 1, Episode 21 (broadcast June 1, 2010). 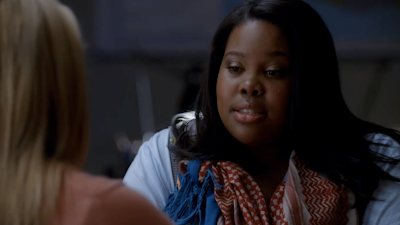 You know, of course, that Glee is a wildly popular and successful TV show. Mercedes is not one of the major characters, but she is an important element. She is, for the most part, a sympathetic character, who is also fashion-conscious. In this episode, "Funk," Mercedes appears wearing a kufiya in a scene where she is talking to the pregnant Quinn, soon to be an unwed teenage mom. Mercedes sympathizes with her plight and invites Quinn to move in with her. At the end of the conversation, having come to an agreement of the minds, Mercedes and Quinn bump fists. 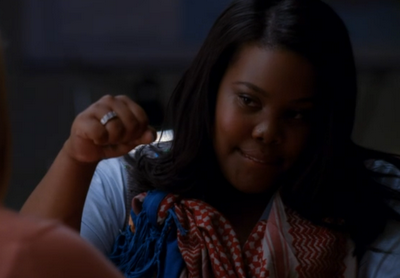 What's the kufiya doing here? I think it's a signifier of Mercedes' fashion sense, a fashion sense that is at least in part "street," given the fact that the kufiya remains an important accessory in African-American urban communities. It's significant that it shows up in a scene where Mercedes is shown to be sympathetic to the white girl Quinn, in a scene of cross-racial solidarity, of Mercedes and Quinn making an alliance based on a sense of shared social marginalization--Mercedes as black, Quinn as pregnant.

2. Andy (David Cross) the environmental activist, Running Wilde, Season 1, Episode 3 (broadcast Oct. 5, 2010)
By contrast to Glee, Running Wilde was a flop. Launched by Fox in September 2010, its demise was announced in late November.
The show starred Will Arnett as Steve Wilde, a billionaire in love with Emmy Kadubic (Kerri Russell, who is engaged to Andy (David Cross), a radical environmentalist. (Cross and Wilde were also both in the terrific Arrested Development. Running Wilde is as lame as Arrested Development was brilliant.)
In episode 3 ("Oil and Water"), Steve gets rid of Andy by getting him to go to Alaska to fight a secret Wilde Oil plan to drill for oil on Inuit land and pollute their waterways. (It seems there is no such plan, but Andy, who Steve describes asa "stupid eco-terrorist/save-the-world nut job," wants Andy gone so he can continue his efforts to win over Emmy.) 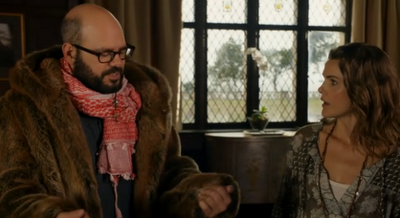 Andy, who wears a red kufiya throughout the episode, is portrayed as a rather ridiculous figure. He worries that Emmy is losing respect and interest in him, remarking at one point, "She doesn't want to listen to my conspiracy theories any more." And Emmy tells Steve that Andy acts like he wants to start the French Revolution but usually just ends up calling up Larry King to rant. Part of Andy's motivation for going to Alaska to "save" the Inuit is to impress Emmy.
Meanwhile Emmy is trying to get Steve to "quit" Wilde Oil in order to prove his good character. (She may be rather disaffected with Andy but she is a committed environmentalist.) Steve goes to the office to quit (he just receives checks from Wilde, has never worked there, but for some reason Emmy is under the impression that he has a real "job"), together with Emmy. Andy calls Wilde to complain about the corporation, and Emmy happens to pick up the phone. Andy is looking for inside information about Wilde's plans in Alaska. Emmy decides that it would be better if Steve stayed at Wilde so that she could find out, through him, what Wilde was up to there. 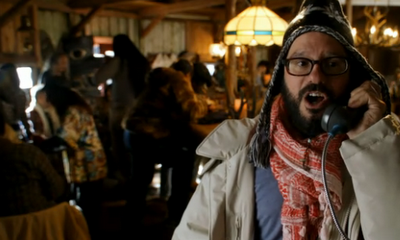 Eventually, Steve does decide to quit. Meanwhile, in the last scene, Andy is shown helping to organize an Inuit demonstration against Wilde Oil. (It's unclear what Wilde really is doing in Alaska.) A Wilde Oil truck shows up, and the employees get out and address Andy as if he is a Wilde Oil employee. They do so because he's wearing (unbeknownest to him) a coat with Wilde Oil logo, that Steve had loaned him for the Alaska trip. The Inuit, who think they have uncovered a spy, take Andy off to administer a beating. Emmy's daughter Puddle, who narrates the episode, says, "and when they caught him, he cried like a little girl."

The kufiya serves the function of marking Andy as a political activist. Emma is political too, but more sensible and even-keeled. Andy is a blowhard, ineffectual in practice. And so clueless that he never notices that he is wearing a coat with a Wilde Oil logo, the log of the company against whose evils he is ostensibly fighting. The kufiya, in this episode of Running Wilde, is clearly a marker of progressive politics, but at the same time, by being worn by someone like Andy, the kufiya itself seems to be tarnished with a brand of left politics that is presented as at once extremist and ludicrous.
3. Superchunk, video for "Digging for Something" (from the album, Majesty Shredding)
Superchunk, for those of you not in-the-know, is an indie rock band from Chapel Hill, NC. According to allmusic.com, [p]erhaps no band was more emblematic of the true spirit of American indie rock during the 1990s than Superchunk." While Superchunk remained active during the aughts, there was a gap of nine years between the release of album 8 (Here's to Shutting Up, 2001), and this year's Majesty Shredding.
Superchunk's song, "Digging for Something," made it onto Spin magazine's list of the Best 20 Songs of 2010, landing at #13. (The album Majesty Shredding was Other Music's #22 on its 25 Best Albums of 2010 list, and of course there are more best of lists to come...) The video for the song (the youtube video is linked to in Spin's article) reflects humorously on the sort of "return" that Majesty Shredding represents for the band, which had been around, but not nearly so much in the spotlight during the aughts as in the nineties. What does it mean for the members of a hot band in the nineties to get back on the stage after they have "aged"?
In the video, they "return" with only one "original" member, singer/guitarist Mac McCaughan. McCaughan is backed by a group of younger artists, dressed in outfits that looks to me like repurposed 80s gear, which I guess is the nostalgia period of choice for the current twenty-somethings. The gear is worn, of course, ironically. McGaughan, in order to make himself appear au courant, and to fit in with his younger bandmembers of Superchunk 2.0, wears Devo style shades, a black-and-red plaid t-shirt, black Converse sneakers, and a black-and-white kufiya around his neck, triangle in front. 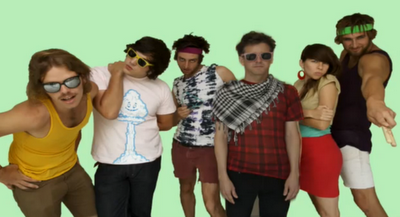 The old band members, meanwhile, are variously working as a dentist (Jon Wurster), a potter selling her wares at craft fairs (Laura Ballance), and a professional Buddhist meditator (Jim Wilbur). The three see a flyer for the Superchunk 2.0 concert, join forces, storm the stage, drive off the youngsters, and rejoin McGaughan to finish the song. Unlike the young upstarts, the three originals just wear normal, non-stylish, regular clothing. Unlike the fashionistas of Superchunk 2.0, the originals are "real." As the song ends, McCaughan, as if to indicate his embracing of his "real" indie roots, throws the kufiya onto the ground and tosses away his dark glasses. He has dispensed with the trivial fashions of the moment and reclaims the authentic, anti-style style of original indie.
In this video, then, the kufiya functions as a key signifier of the pop fluff of contemporary fashion. Real indie isn't concerned with such inconsequential accessories of musical performers who are all show and no go. Real indie is just about the music.
Stay tuned. Friends keep sending me their kufiya sightings, and I'm behind in my reporting, so there is always more to come. (Many thanks to David for item #1, Noat for item #2, to Kamran for item #3.)
Posted by Ted Swedenburg at 10:40 PM 2 comments: