drones of war: kill a man with a dronestick in your hand 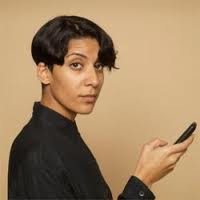 John Caramanica reviewed Fatima Al Qadiri's new release Desert Strike today in the New York Times. Given the subject matter and its stylistic connections to grime, I of course immediately purchased it. I'm not entirely convinced that it does all that Caramanica claims it does. It's good but I don't find it so "morose, ominous, moving" as JC. I don't hear "Ghost Raid" quite as "nihilistic" as he does. The "hints of grime" on "Hydra" are too weak for me. It's true that "Oil Well" is "littered with the sounds of weapons being cocked and emptied" but given that the EP is meant, according to JC, to be "a conversation piece about war," I want it to be "grimier." I want it to convey much more of the horror and the blood and guts. Especially after Gaza.

Louis Pattison also reviewed Al Qadiri's EP for The Guardian last Friday. There we learn that Al Qadiri was raised in Kuwait, that she used to play a Megadrive game called "Desert Strike: Return To The Gulf" when she was 10, in 1992, just two year after the Iraqi invasion. She now lives in Brooklyn. (Of course!).

I think Pattison overplays the "horrors" evoked by Al Qadiri's music as much as Caramanica does. But Pattison did alert me to a much more interesting piece of music that reflects much more vividly on the interconnections between war, video games, and drones: Montreal producer d'Eon's "Kill a Man with a Dronestick in Your Hand."

I find the video and the song to be quite riveting. It's electronic, it opens with some great, electronically altered oud playing (perhaps played by d'Eon), then shifts to a slow dance beat. The sing-songy lyrics are a bit hard for me to catch because the voice is slightly modified through electronics. But it's a very simple and clever rhyme scheme where all the lines rhyme with Man and Hand. Thus: Taliban, Pakistan, etc. Two lines I can catch are "Kill a man far away in Pakistan" and "There's no blood on your hand."

The video mixes images of what appears to be the men and women who sit in rooms in the US and guide the drones to their targets; video footage of "real" drone strikes from above and on-the-ground; video games that simulate drone war; a woman in a very short skirt dancing; scenes of the Taliban flogging a prisoner, and so on. Sometimes it's not clear whether you're watching video games or "real" war scenes.

You can watch the vid below. You can buy the song (well worth it) from iTunes and, no doubt, other venues. d'Eon records on the Hippos in Tanks label. "Kill a Man with a Dronestick in Your Hand is from his album Palinopsia. (In 2011 d'Eon recorded a split 12" with the fabulous Grimes, called Darkbloom. For the record, Grimes has been kufiyaspotted.)

d'Eon "Kill a Man With a Joystick In Your Hand" from OLDE ENGLISH SPELLING BEE on Vimeo.

between the start of the year and the outbreak of Operation Pillar of Defense, only one Israeli was killed by rocket and mortar-shell fire from Gaza (the figure should have been three, according to Haaretz's data ). During that same period, Israel killed no fewer than 78 Palestinians in Gaza. That was during a period of calm that, according to Israel, was broken only by the Palestinians.

To these figures must be added the data from Pillar of Defense: 156 Palestinians killed, and six Israelis. The Economist reminds us that 19 of those killed were children...

During this period, Palestinians fired 7,361 rockets at Israel. It's hard to find data on how many missiles, shells and bombs Israel launched, but the numbers would be immeasurably higher...

what does Israeli propaganda try to do? To paint the south as the sole and only victim...

the primary victim, the one who is bleeding most, is Gaza; Israel is only in second place. It's impossible to ignore this. In Gaza, the death toll is enormous.


Posted by Ted Swedenburg at 10:15 PM No comments:

'knock on the roof' or, ‘teaser’ bombs/missiles

fired "onto houses designated for destruction, with the intention of making an impact serious enough to scare the inhabitants into fleeing their homes before they are destroyed completely...Teaser bombs are just another means of sending a warning."

"if a warning has been issued, and not heeded, the victim is no longer a ‘non-combatant’ but a voluntary ‘human shield’."

"Israel’s real power over Gaza is invisible. It is the ability of the Israeli air force to maintain a perpetual ‘surveillance and strike’ capability over Gaza – drones can stay in the air around the clock – that made the territorial withdrawal possible. Together with its control of the Gazan subsoil – manifested in the robbing of much of the water from coastal aquifers – and over the airwaves, including the use of electromagnetic jamming technology, all that is left for the inhabitants of Gaza is the thin surface of the earth that is sandwiched between Israeli-controlled zones. No wonder they try to invade the space below and above them with tunnels and rockets."

Posted by Ted Swedenburg at 7:11 PM No comments: 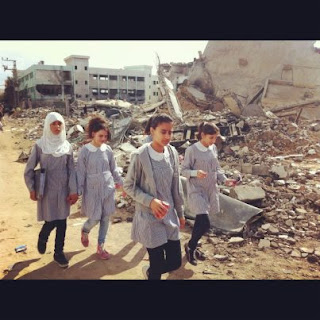 Gaza’s economic decline is seen in the near collapse of its agricultural sector. One factor is the destruction of around 7,800 acres of agricultural land during Cast Lead. Consequently, approximately one-third of Gaza’s total arable land is out of production. Furthermore, Israeli-imposed buffer zones — areas of restricted access — now absorb nearly 14 percent of Gaza’s total land and at least 48 percent of total arable land...

Another critical constraint is water. Gaza’s aquifer has been ruined by prolonged over-pumping and sewage and contaminant infiltration...

Israel’s blockade policy restricts the entry of materials needed to repair, maintain, and upgrade Gaza’s sewage and wastewater treatment infrastructure. Save the Children reported in 2011 that Israeli airstrikes destroyed water and sanitation infrastructure valued at $1.3 million.

The impact on health is clear: Just under 10 percent of Gazan children under five suffered from chronic malnutrition in 2010. According to Save the Children, “Diseases of poverty and conflict combined with a degenerating health care system are claiming growing numbers of Gaza’s children.”

Birth defects, congenital anomalies, and cancer cases are reportedly rising. This is likely due to environmental contamination, including the possible use of toxic weaponry during Cast Lead. The current military assault will undoubtedly worsen environmental conditions.
Posted by Ted Swedenburg at 10:13 AM No comments: 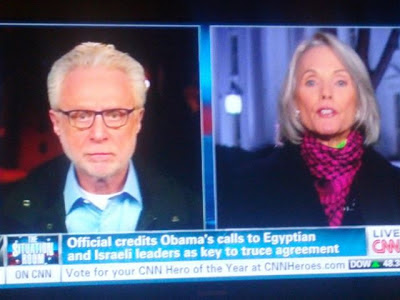 Thanks to Youssef for taking this photo and sharing it with me (here's the source). This is from yesterday's CNN coverage of the Gaza ceasefire (November 21). Jill Dougherty, CNN's Foreign Affairs correspondent, showed up to discuss the Gaza agreement with Wolf Blitzer wearing a pink kufiya scarf. Did she do it on purpose? Is this, as Youssef observes, why Wolf looks bummed? Given that Wolf studied at Hebrew University, speaks Hebrew, worked for AIPAC, and covered Washington, DC for the Jerusalem Post from 1973-1990, he (unlike some US correspondents), definitely knows what a kufiya is and what it might mean.
Posted by Ted Swedenburg at 10:47 AM 1 comment:

Posted by Ted Swedenburg at 9:30 PM No comments:

poetry of US war on terror 2.0 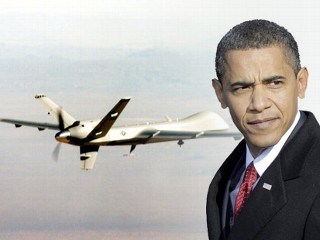 Posted by Ted Swedenburg at 12:13 PM No comments: