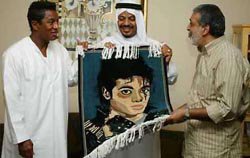 The Khaleej Times (Dubai, UAE) of November 24 reports that Michael Jackson, who recently settled in Manama, Bahrain's capital, is donating large sums of money (amount undisclosed) to build a state-of-the-art mosque near his luxury palace in the city. "Jackson did so," says the report, "as a token of appreciation to the Bahraini people, who welcomed him and treated him as if he was one of the citizens of their country." Michael's brother Jermaine, formerly of the Jackson Five, converted to Islam in 1989.

But have you seen what the mosque will look like? Quite funny actually:

i hope he makes it as good as neverland!