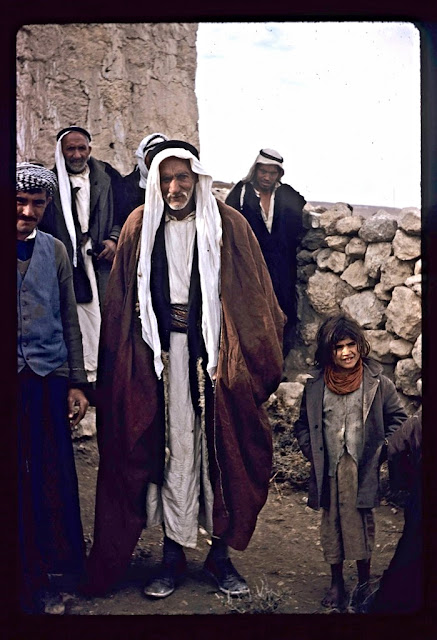 Al-Tuwani (also spelled At-Tuwani) is what as known as a "frontier village," that is, a village that is near the 1948 border between Israel and the West Bank (occupied by Jordan) and that lost its agricultural lands due to Israel. Residents of frontier villages are not considered refugees, because they still live in their original homes although they lost their chief means of livelihood. As they're not refugees, they were not covered by the the mandate of UNRWA, the agency charged with serving the needs of Palestinian refugees. We (the Swedenburg family) visited al-Tuwani on December 26, 1961, with Robert Lapham, an employee of Church World Service, one of the few aid agencies to do work in al-Tuwani. The Laphams resided in Hebron (al-Khalil), the only Christians, they reported, in the city. (You can read about Lapham here: www.nytimes.com/1988/02/25/obituaries/robert-lapham-58-de...; he passed away in 1988.)

The village, we were told, had 300 residents. We reached it over a dirt/stone track (no road) They were very, very poor -- the surrounding land was very rocky and not suitable for agriculture. My father writes in his diary: "Children without shoes, clothes in tatters." You can see an example in the photo. The villagers were extremely hospitable -- we were invited for tea at the house of the village headman, and they were about to prepare chicken for lunch but we said our thanks and departed. Reportedly we were the only Americans to have visited the village besides our host (who lived in Amman) and Mr. and Mrs. Lapham.

Since the Israeli occupation, al-Tuwani has come under very severe pressure from nearby Israeli settlers and military. You can get an introduction to the issues at wikipedia: en.wikipedia.org/wiki/At-Tuwani and from the Christian Peacekeeper Teams: www.cpt.org/taxonomy/term/6. There is also a FB page for an organization called Humanity Together: Supporting At-Tuwani, Palestine: www.facebook.com/HumanityTogether.

Addendum: the best academic source I've read on Palestinian border villages (of which there were/are 111) is Avi Plaskov's The Palestinian Refugees in Jordan 1948-1957 (Routledge 1981).

Posted by Ted Swedenburg at 7:43 PM No comments:

On July 31 The Guardian reported on the release of the song "Frank Brazil," by the Indian ska group Ska-Vengers.


Frank Brazil is the alias of Udham Singh, who was an eyewitness to the notorious Amritsar massacre of April 13, 1919, when British soldiers killed over 1000 Indian civilians at Jallianwalla Bagh. In 1940 Singh took his people’s revenge in London when he assassinated Michael O’Dwyer, former Lieutenant-Governor of the Punjab and the purported architect of the massacre. After he was arrested by police, Singh reportedly signed his name Ram Mohammed Singh Azad, signifying the joint Muslim-Sikh-Hindu participation in the anti-colonial freedom struggle (“Azad” means freedom in Punjabi; Ram is a Hindu god, hero of the Ramayana epic). By doing so, and by asking of Waris Shah rather than a religious text, Udham Singh underscored that his vision of revolutionary politics was secular and anti-imperialist and not sectarian.

Singh was subsequently convicted and hanged for his crime.

The tale of Udham Singh, sometimes known as Shaheed-i-Azam Udham Singh or the “great martyr,” has been retold in numerous bhangra tracks since the early seventies as well as by Asian Dub Foundation in the song “Assassin” (on Rafi's Revenge, 1998), and he is the subject of at least three films.

Below are the opening lyrics to ADF's "Assassin."

Mohammed Singh Azad
Sindabad!
No apologies
Not a shot in the dark
This is a warning
The sleeping tiger awakes each and every morning
The time is now right to burst the imperial bubble
And my act of revenge is just a part of the struggle
A bullet to his head won't bring back the dead
But it will lift the spirits of my people

Fun'Da'Mental also do a verse about Udham Singh on the song "Electro G-had," off their controversial 2006 album All Is War: The Benefits of G-had. The song celebrates the memory of the so-called “terrorists” who fought the British in India during the colonial period. It was composed and sung by then-19-year old British-Asian musician Subiag Singh Kandola, a Punjabi folk song put to electronic beats. It is in the vein of a BrAsian tradition of "revolutionary’ poetry recitations” held periodically to commemorate the heroes of India’s anti-colonial struggle.

Fun'Da'Mental provide this translation of the Udham Singh verse:

On the day of Vaisakhi, Udham Singh made this solemn prayer:
"Oh my Guru, may I take revenge on those who murdered my people at Jallianwalla Bagh. I ask for your blessings in this task."
After 20 long years, the hero Udham Singh tracked down the main culprit, Sir Michael O’ Dwyer and exacted his revenge in the home country of his oppressor.

The evil regime was knocked into place by his back handed stroke.


In conclusion, it should be noted that Mahatma Gandhi condemned Singh's assassination of Dwyer.
Posted by Ted Swedenburg at 8:47 PM No comments:

I only just noticed this verse from Eddy Grant's classic "Living on the Front Line," even though I must have heard this song dozens of times.


The song is off of Grant's 1979 album, Walking on Sunshine, and it reached #11 in the UK; in the US it hit #86 on the R&B charts. Grant was born in British Guiana, moved to England as a youngster. He was a member (lead guitarist and main songwriter) of The Equals, who had a number one hit in 1968 with "Baby Come Back." He is probably best known for his song, "Electric Avenue," which reached #2 in both the US and UK in 1983. But I think this is his best, and his most "political" song.
Posted by Ted Swedenburg at 8:03 PM No comments:

Brownbook is a magazine focusing on urban design, travel and culture in the Middle East. It's published (paper) six times a year, in London, but also has a website, and a music section. Periodically they introduce you to a new artist or mixtape or whatever. Recent items include: 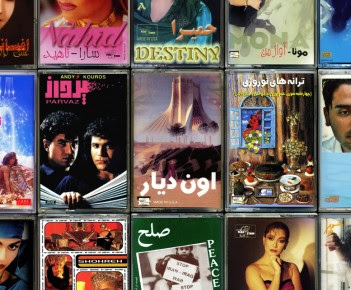 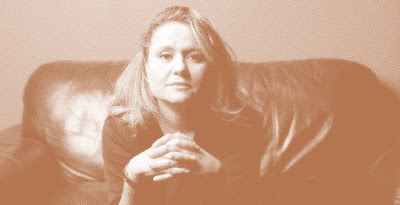 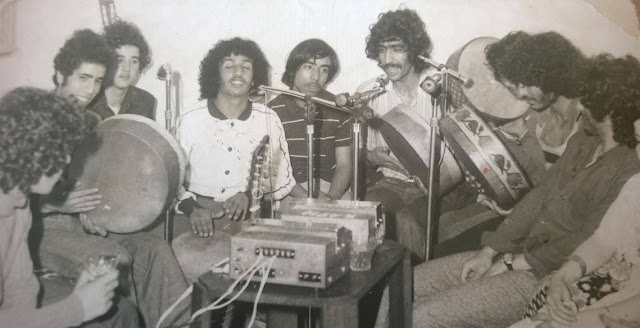 A clip of the late Sabah doing "A Man from Tehran" (so terrific)... 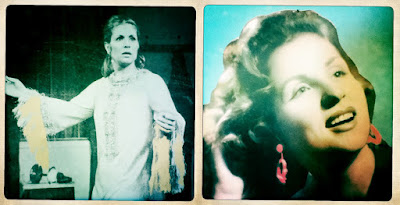 Posted by Ted Swedenburg at 8:55 PM No comments: 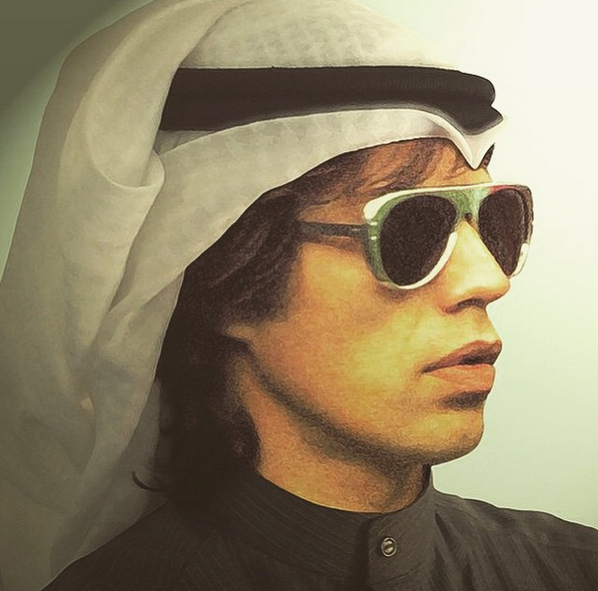 I have no idea when this photo of Mick Jagger was taken. I found it via Reorient, here.
Posted by Ted Swedenburg at 4:35 PM 2 comments: