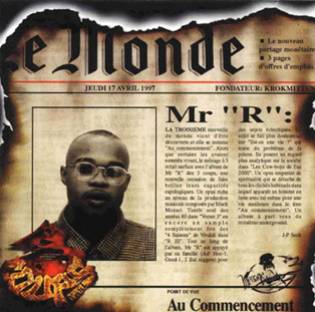 If it’s not the Muslim extremists, it must be the rappers....

Grosdidier had already, prior to the riots, filed a complaint against Monsieur R. On August 12, Grosdidier requested that Justice Minister Clement forbid the dissemination of Monsieur R’s “FranSSe” (both the recording and the video), charging that it was an incitement to “racism and hate” and that its message could, when received by “destructured (destructuré)” and “lost (paumé)” urban youth, legitimate “at best incivility and at worst terrorism” among them. Grosdidier cited lyrics describing France as a “bitch” (garce, salope) and attacked the state and the police. He describes the video as containing a scene where two nude women rub themselves with the French tricolor (flag), and states that the clip’s “amalgames” liken France to the Third Reich. The clip also shows Chirac shaking the hands of the late Zairean dictator Joseph Mobutu. (Monsieur R is originally from Zaire/Congo.) (And here’s another line frequently criticized: "Moi, je pisse sur Napoléon et le général de Gaulle.")

Monsieur R responded to the charges in an interview with Libération (August 12, p. 11), saying “when I speak of France, I’m not talking about the French people (les Français) but about the leaders of a state who, from slavery to colonization, exploit us.”

Meanwhile, Daniel Mach, another UMP deputy, has brought a procedure against Monsieur R at the correctionnal court of Melun, where Monsieur R was to appear yesterday (Wednesday November 23).