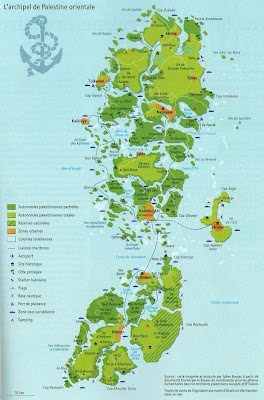 This map, which brilliantly illustrates the existential position of Palestinians living in the West Bank, is from the blog Strange Maps. It's created by Julien Busac, who says:

“Maybe posting the full map would help to take it for what it is, i.e. an illustration of the West Bank’s ongoing fragmentation based on the (originally temporary) A/B/C zoning which came out of the Oslo process, still valid until now. To make things clear, areas ‘under water’ strictly reflect C zones, plus the East Jerusalem area, i.e. areas that have officially remained under full Israeli control and occupation following the Agreements. These include all Israeli settlements and outposts as well as Palestinian populated areas.”

If Obama wants to help solve the Palestine question--and he must do so if he ever wants the US to do any good in the Middle East--then he must recover all that "drowned" Palestinian territory. Only then can the two-state solution that the US claims it wants be realized.

Read the whole post here. Click on the map above to see it larger. But go to the original for an even better view.

A close view of the Jerusalem archipelago is here.
Posted by Ted Swedenburg at 5:56 PM