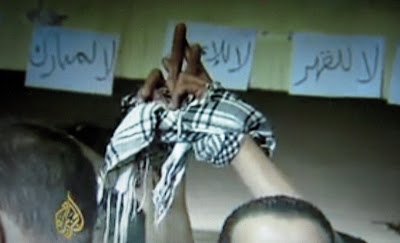 Just in case you were in any doubt whether or not the kufiya still maintained some political meaning, check out these images. They are from a report on al-Jazeera English about the April 6 pro-democracy movement and the role of bloggers in this struggle. It features an interview with my friend Gamal Eid, an Egyptian lawyer who is involved in the legal defence of the pro-democracy bloggers, and who serves as the Executive Director of the Arab Network for Human Rights Information. The photos are from about 2:35 into the report, and they show a rally in favor of the April 6 movement, which called for a strike on that day. Notice how central to the event is the black-and-white kufiya, which is worn by activists who are chanting, and is held aloft as a kind of token of resistance, nationalism and democracy. And that's what it's about in Palestine, too. 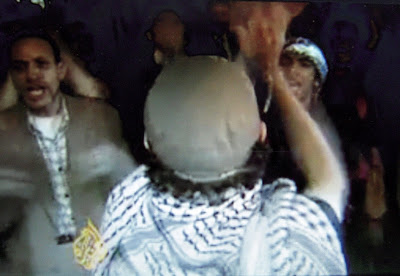 Unfortunately, the movement was not able to generate much action on April 6, as reported by The Arabist.
Posted by Ted Swedenburg at 9:30 PM