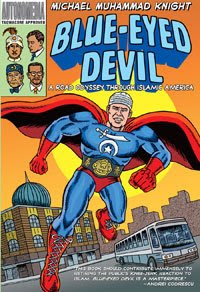 A very astute essay from Michael Muhammad Knight, courtesy Goatmilk, which is running a monthlong series, “Facing Race: Muslims and Islam." Based on this essay, we'd all do well to keep track of this series.

Knight tells us that he doesn't believe in the Yacub theory, but that this, and other such beliefs of the Nation of Islam and the Nation of Gods and Earths, contain a deeper truth. A truth that both US white people, and Arab Muslims, could usefully take on.

(I have my own "white devil" essay: "The White Devil as Expert Witness," published in Anne Meneley and Donna Young, eds., Auto-Ethnographies of Academic Practices, Peterborough: Broadview Press, 2005. It's about my experiences as an expert witness in the case [Marria v. Broaddus] of a young Five-Percenter inmate, Intelligent Allah, who filed suit against the NY State Prison system, demanding that his religious rights as a member of the Nation of Gods and Earths be recognized. He won!)

Be sure to read all of Michael Muhammad Knight's terrific books.
Posted by Ted Swedenburg at 11:58 AM

Email ThisBlogThis!Share to TwitterShare to FacebookShare to Pinterest
Labels: devil, Mike Knight, Nation of Gods and Earths, Nation of Islam

my email address is danowl01@louisville.edu

i attend the university of Louisville and am writing a research paper for my Intercutural comm class. Thanks in advance..