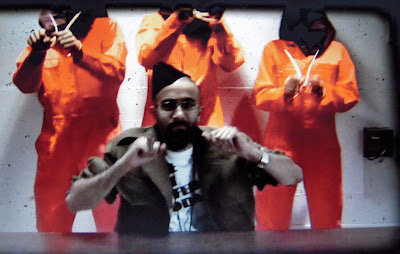 Check out this remarkable video from the Iraqi-Canadian rapper Narcicyst.


It's about the kind of everyday harassment that Arabs and Muslims receive when they attempt to travel, especially when they cross borders. It is quite brilliant. And highly amusing.

Narcicyst gets nabbed for questioning at the airport, wearing a t-shirt that says, "Same Shit, Different Saddam." Then we see a shot of Narcicyst's Afro-Canadian sidekick, and a guy with a kufiya around his neck, whose t-shirt reads, "Same Shit, Different Hipster." The hipster, of course, even though he is garbed in Arab gear, doesn't get fingered by security. 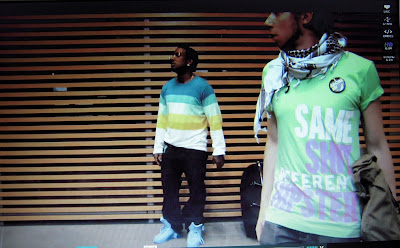 Security searches Narcicyst's luggage, and find this magazine, "Petrosexual Man." As the security guy looks at the mag, the woman, clad in red bikini and red kufiya, jerks off the oil derrick, and it spews oil. The pub seems to represent the security agent's fantasy, with its titles, "Strapped to an Oil Rig and Ready to Blow!," "The Biggest Drills!", "The Nakedest Chicks!", "The Deadest Arabs!", "Secret Prisons: A Look at the World's Most Brutal Facilities." And best of all, there are several scenes of Narcicyst seated at the interrogation table, rapping, with dancing Abu-Ghraybish hooded prisoners, as his backup singers. Too much! 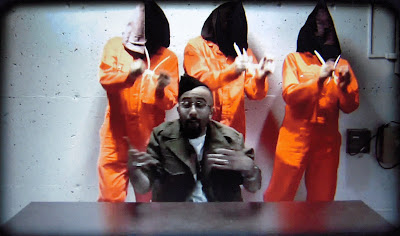 Check out Narcisyst's blog here, and get ready for the release of his first album, on May 25, which will include the song "P.H.A.T.W.A."

For more on harassment of traveling Muslims and Arabs, please see Safraz Manzoor's piece in today's Guardian, "How to tell I'm not a terrorist."

All Muslims who consider themselves liberal and tolerant could apply for a special card which when presented would show the holder was a "pre-approved Muslim", thus saving time at airports. Sure, some may say that such a card would represent a gross violation of human rights but I think it could be marketed like a credit card: membership has its privileges – in this case not being indiscriminately arrested or held up when traveling. Those who feel uncomfortable carrying a card could be offered an alternative – a white girlfriend perhaps, someone to vouch for the fact that they have successfully ­integrated into society and have no immediate plans for a holy war.
Posted by Ted Swedenburg at 11:55 AM