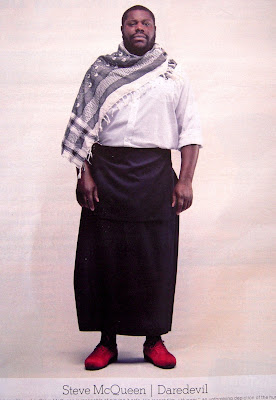 Just when I think that the kufiya is now longer a very important fashion item, I spot this, a couple weeks ago or so, in the New York Times Style Magazine, Men's Fashion Spring 2009. Steve McQueen is the director of the acclaimed recent film Hunger, about imprisoned IRA hunger striker Bobby Sands. McQueen is also an accomplished artist.

The photo is prominently featured in the magazine, on the back page, under the title THE ORIGINALS. Curiously, the caption only discusses the skirt McQueen is wearing, designed by Yohji Yamamoto. No mention of the kufiya. If you look closely, you will see that it has skulls woven into the design.

I don't have a scanner, so a photo of this will have to do. To see the original online, go here.
Posted by Ted Swedenburg at 10:37 PM