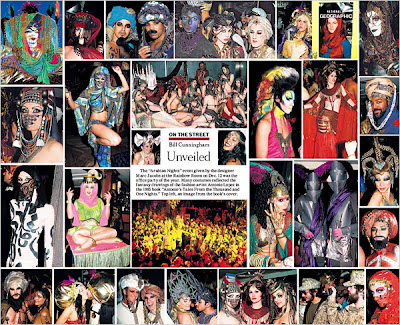 I saw this rather astonishing item yesterday in the Sunday Styles section of the New York Times. The piece, by Bill Cunningham (who also shot the photos), is entitled "Unveiled" and it reads as follows: "The 'Arabian Nights' event given by the designer Marc Jacobs at the Rainbow Room on Dec. 12 was the office party of the year. Many costumes reflected the fantasy drawings of the fashion artist Antonio Lopez in the 1985 book 'Antonio’s Tales From the Thousand and One Nights.' Top left, an image from the book’s cover." Unfortunately, the photos--the best part of the piece--are not reproduced in their full size on the NYT site. But if you click on the photo you can get a fuller view. You can also google "Marc Jacobs" and "Arabian Nights" and find more shots of the event on various blogs. I've reproduced a few here, many of which show more skin than the Times is able to show. 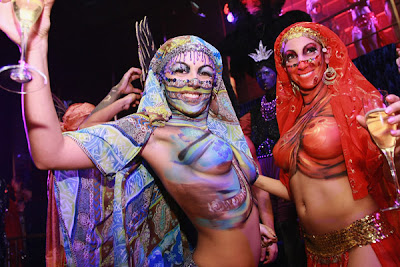 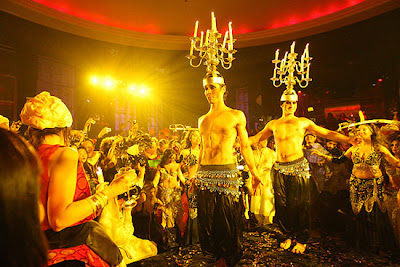 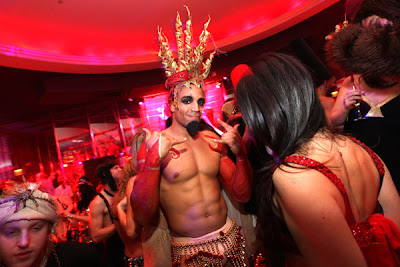 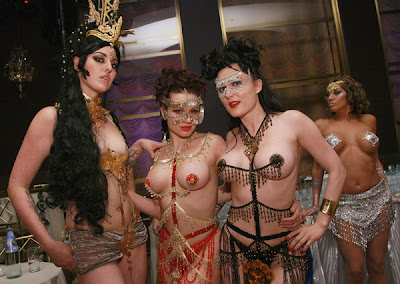 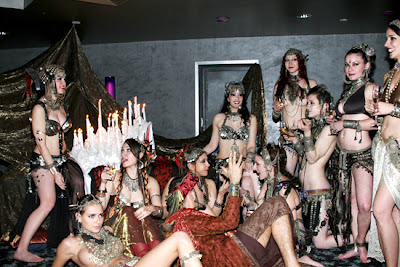 These are the entertainers, presumably professional bellydancers. 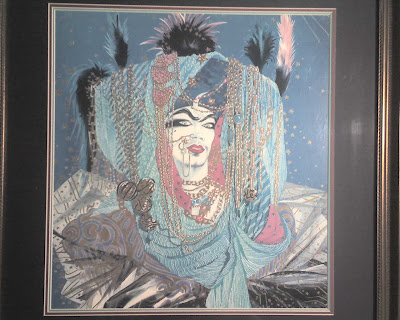 I've not found out much relevant about fashion illustrator Antonio Lopez (d. 1987), the presumed source for many of the costumes, but I have been able to locate another painting from the book. But I would suggest that the "source" of the Marc Jacobs party fantasy goes back much further than Lopez's 1985. Orientalism was all the rage in the West during the first three decades of the twentieth century, and it was very common for socialites in New York and London to hold parties where the guests dressed up much as Marc Jacobs' guests did in 2007. Such events were quite popular, and considered "liberatory" for women, because adopting Eastern dress meant throwing off the constraining corset. 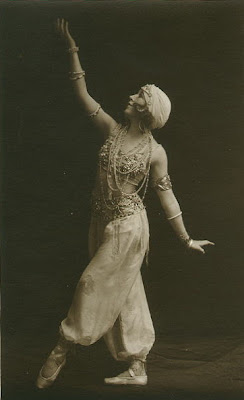 (Some argue that the original "source" for this fashion movement was the appearance of Arab "bellydancers" at the Chicago Worlds Fair in 1893, and particularly the dancer known as "Little Egypt.") The brilliant and visionary filmmaker Jack Smith queerly evokes these traditions in his films Flaming Creatures and Normal Love (which you can view here); freak folksinger Devendra Bernhardt and Hairy Fairy also recall the early twentieth century Orientalist soirées in a NYT fashion spread.

This Orientalism can be found all over the place, and it is quite well documented. One of the best articles I've read about it is by Peter Wollen ("Fashion/Orientalism/The Body," in New Formations 1, 1987), where he discusses the role of Matisse, the Russian Ballet and its costume designer Leon Bakst, and fashion designer Paul Poiret in promoting these trends, in both the domain of "high art" and in popular culture. 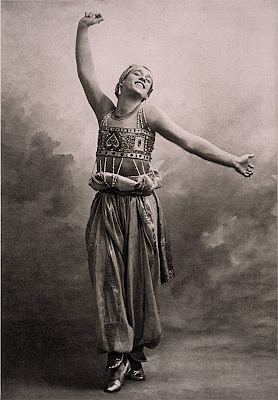 A photo of Nijinsky from the Ballet Russe, in a costume designed by Bakst. 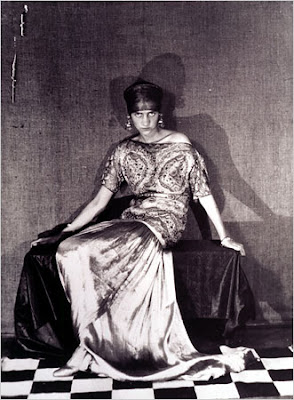 This is a photo of Peggy Guggenheim in a Poiret outfit, taken by Man Ray.

And then there is modern dance, whose development is closely related to the image of the Eastern bellydancer. Among the names to mention in this regard are Maude Allen (shown below in her famous Salomé role) 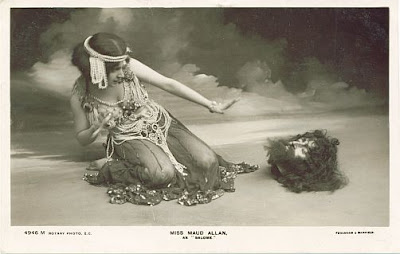 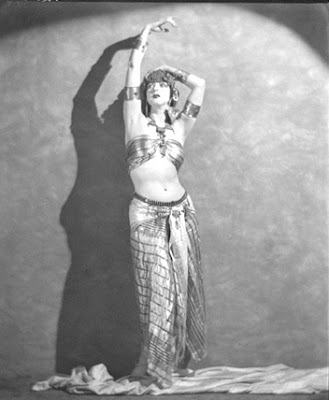 And then of course there is cinema, from the Babylon sequences of D.W. Griffith's Intolerance (1916) to the films starring Theda Bera 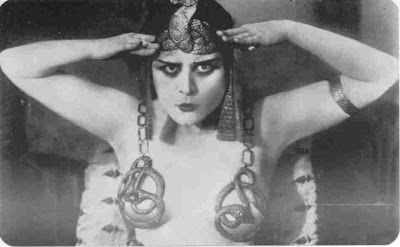 ,Rudolph Valentino as the Sheik, and so on.

And then there's even art deco, as evidenced in this bit of sculpture.

Back in the early twentieth century, when this sort of Orientalism was all the rage, it was connected to a certain notion of female, involving more freedom for the body from constricting clothing (the corset), and a more libertine orientation to bodily display, rooted in an imagined model of an Orient that was more sensual than the West. Today, clearly, it doesn't mean the same thing to dress up in "Oriental" costume as it did 100 years ago. I've not yet worked out what's going on with the Marc Jacobs party. More later, inshallah.
Posted by Ted Swedenburg at 10:43 AM

Interesting... This guy Marc Jacobs has also gotten a rep very recently for the work he's been doing with M.I.A. (with some nice flashy pictures of her floating around the Net). I don't know much about his fashions (or anybody's fashions for that matter), but I think he could be my favorite designer now. :)

Didn't know about the MIA connection. Photos can be found here: http://www.popcrunch.com/mia-marc-by-marc-jacobs-ad-campaign-springsummer-2008/, among other places. (They have nothing to do with "Orientalism"!)