Everlast's "Letters Home from the Garden of Stone" 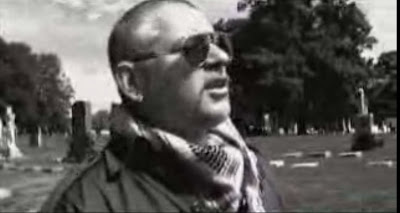 I learned about this song and video from the invaluable KABOBfest, who kufiyaspotted Everlast. (It would appear that I'm involved in some sort of kufiyaspotting contest with my kabob comrades!) But this cannot count as a kufiyaspotting for me, since I've already 'spotted' Everlast, who logged in at #13. Thanks to the KABOBers for turning me on to a great anti-war song, one of the best I've heard. Everlast sings from the position of a soldier fighting in Iraq, raising questions about the rightfulness of what he's doing. The song and video manage to raise sympathy both for US soldiers who are dying as well as for the Iraqi civilians. The video in particular makes clear that Iraqi civilian casualties are much higher; it shows a billboard that says, "684,000 Iraqi civilians killed since 2003," as well as images of wounded Iraqi civilians and one horrific image of a dead, burned corpse--the kind of picture our US media does its best to keep out of public view. 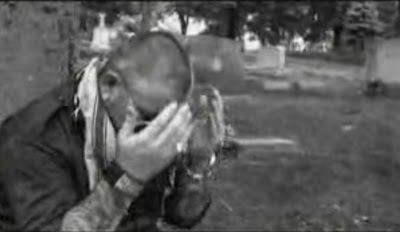 But here's the thing about the video that is wild. For about half the vid, Everlast is shown, wearing a kufiya, playing guitar or walking around in a cemetery. There are a couple closeups of statues of Jesus and a number of closeups of the Virgin Mary. Then, for a few moments, we see Everlast assuming the position of prayer. And if you recognize these things, it's clear that he's performing Muslim prayer. Nothing in the lyrics give this away, but it is well known in rap circles that Everlast converted to Islam in 1996. According to Everlast, it was in part due to the influence of rapper Divine Styler, when he was making his transition from the Five Percenters to Orthodox ("Sunni") Islam. 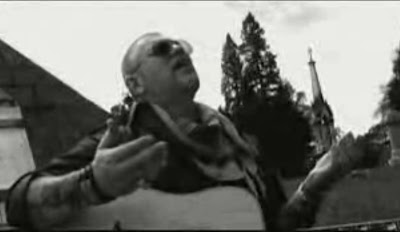 And there's nothing inherently un-Islamic about doing Muslim prayers in a cemetery, nearby statues of Jesus and Mary. For Muslims, Jesus is revered as a prophet (but is not regarded as the son of God). Muslims also honor Mary ("Maryam") and believe in the virgin birth (but not Jesus' divinity).

Everlast has come a long way since House of Pain and "Jump Around."
Posted by Ted Swedenburg at 2:46 PM

"(It would appear that I'm involved in some sort of kufiyaspotting contest with my kabob comrades!)"

Ha ha... no way Ted, *you* are the kufiya MAN! We might just have to collaborate on something soon...

Just joking, quiqui, we're all in the same gang...There's so much kufiyaspotting to do it would take an army.

i heard this song and it had a nice beat, but when i learned of the lyrics, i wanted to vomit. i love how he blames, me the soldier for whats going on. you know what the problem is with people like you, mr. professor who has never served one damn day in his life, is? the problem is that you sit there in your comfortable chair and curse the military for what we do all the while living under the very blanket of freedom i provide. let me let you in on a little secret. we do get trained to kill, but we are also human's you moron. we derive some pleasure from killing other humans. its our job and thats that. by the way, 95% (and im sure im underestimating this by a long shot) of iraqi civilians that are killed are by their own people in the form of vbeds, ieds, and suicide bombers. not us. why dont you actually join and find out what they teach us instead of speculating from the news media or that arrogant brain of yours. just because you have a doctorate doesnt make you intelligent. all the degrees in the world couldnt buy you any common sense. enjoy your freedom today. its brought you by people like me who have given everything, missed birthdays, holidays and time i cant get back with my wife and kids. but im glad you're comfortable.

im worred that all people in the military are this over enthusiastic about their opinions...seriously look beyond whats on the outside of the song what the words are saying literally... if you would open up your stubborn military ears and actually listen to the song it seems *gasp* the song is saying absolutely nothing wrong, infact perhaps the song is showing your side of the war
"I really am trying to do the right thing
I hope my government can say the same"

while im not going to approach this subject with the attitude the first military poster did i do want to say a few things. you point out a few of the things encountered in the video as far as the burning corpses etc but you completely neglect the soldiers and Marines carrying the bodies of their best friends, from my view point you completely neglect the main view points in the song highlighted so well by the lyric 'I won't know the man that kills me' i understand you pointing out the muslim prayer because of your religious background but if you're a citizen of a free country and particularly America i believe you should take a long look around at the freedoms you have compared to so many that put their lives on the line for you to enjoy, while they scarifice those very same freedoms for that purpose, only to come home to animosity and scorn. beyond that though you have an amazing attention to detail within this video and i quite enjoyed picking up on small things that i missed using your blog

K. 1st i don't think he is blaming soldiers who are there fighting. 2nd listen to the lyrics, it can be anyone feeling that at anytime during war when you are far removed for your family in life and death situations. 3rd he showed all the caskets in lines, the boots with their rifles in them, and family members crying over the casket...did you miss that. Vomit if you must, but you totally didn't get it, and to make comments on it w/out understanding, not cool. Um ya, the stance he took in the cemetery was not a Muslim ritual...ITS CATHOLIC. We do this at the beginning of mass when we pray for our sins, we do it after the host & wine are taken up to the alter, and we do it again before we go up for communion. You can tell when they do the shots of the statues. They show Jesus and The Virgin Mary (which Muslims do not believe in). Everlast is an Irish Catholic. If you don't like the video, then protest against the media outlets that show this shit. He only put out there what the media has already portrayed the US Military as monsters. He wore what he wore in a cemetery doing our rituals for one reason...for peace, unity, to love one another, and to not shed blood. Our salvation comes from abiding by the 10 commandments, look at the the ones in the video that have been broken on both sides...that is what he was showing. In in the end...he said it perfect, "We all wind up on the same side cause not one of us doing God's will."

Read the Koran, it is almost similar to what the Israeli's believe. They both believe that Holy wars are justified and they don't believe Jesus was human, but a profit. In both religions, there is only one person that is the highest and that is God.

We will never know how many true religions are out there, because God is smarter than all of us and sent the Angel Gabriel to unify many nations in their own cultures. It would be better if people would get to understand differences instead of bashing others for what they are trying to bring to light.

Hay not for nothing but the person who said they vomit at the lyrics to this song needs to stop quoting movies. You want to rip into someone or something do it with your own words. Not that of the great Jack. I have neither the time nor the inclination to explain myself to a man who rises and sleeps under the blanket of the very freedom I provide and then questions the manner in which I provide it. And also listen to the words again he isn't blaming anyone but the Government.

Actually, Everlast is NOT choosing sides in this song. He is not blaming anyone. He is trying to show the point of view that a soldier would have, possible on both sides. And he was born and raised Irish Catholic, but converted to Islam in 1996, and is very open about it.

just so you know, he got most of these lyrics from a letter a soldier wrote and sent back to his parents. Hince the talking to his family..

Personally I love this song, its not bashing anyone, its talking about the issues everyone faces when theyve actually killed someone. Im assuming youve never done so if you dont recognize the sentiments.

-From a soldier in the first Infantry Division.