This clipping is from the Chicago Defender, July 6, 1957, p. 30, and is to be found in the online version of From Sonny Blount to Sun Ra: The Chicago Years, by Robert L. Campbell, Christopher Trent, and Robert Pruter (Revised August 21, 2007). Regarding the photo, Campbell et al write: "The photo that accompanied the Defender announcement showed Sunny wearing a fez, as he and the rest of the band had done for a little while the previous year. It is said that they quit after some of Elijah Muhammad's bodyguards showed up one night and told them, 'No more fezzes.' Apparently such headgear was reserved to the Nation of Islam." 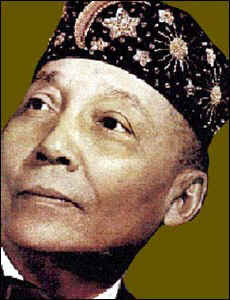 As far as I'm aware, the fez wasn't worn by the general membership of the Nation of Islam, but only by Elijah Muhammad and some of his inner circle.
Posted by Ted Swedenburg at 7:45 PM