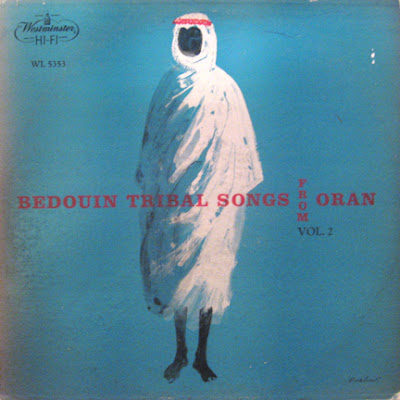 I'm a huge fan of the music blog Magic of Juju, which has posted massive amounts of great music, downloadable for free (it's all from out-of-print LPs and 45's). But this is a real gem. The title of the album is "Bedouin Tribal Songs from Oran," which in a sense is an accurate designation. But in reality, it's an entire album of what more recently became known as rai music, recorded by Cheikh Mohamed Relizani, an important "proto-rai" singer, and one of the predecessors of the more famous Cheikha Rimitti. If you know Rimitti's recordings, this will immediately sound familiar, the distinctive gasba (reed flute) and guellal (goblet drum) backing Relizani's characteristic vocals. The name "Relizani" indicates that Cheikh Mohamed was from Relizane, a town established by the French colonizers of Algeria, located to the east of Oran. Cheikha Rimitti grew up in Relizane as well, and she recorded her first traclss in 1952 under the name Cheikha Remettez Reliziana. It's very exciting to have access to another early rai recording that I was completely unaware of. (The album came out in 1955 on the Westminster label, but it's not clear when it was originally recorded.)

It is correct that one of the sources of rai was the rural music that originated with the Bedouin and peasants of the Oran region. The liner notes for this recording, penned by Mouncef Saheb-Ettaba (author of an Arabic textbook), are a bit wacky, and claim that the Bedouin preserved the music of Andalusia. I believe this is totally incorrect. Andalusian music was an elite urban tradition in Algeria (and elsewhere in North Africa), and the rural tradition something quite different.

Go here to see a short clip of another rai master, Cheikh Hamada, backed by gasba and guellals.

Posted by Ted Swedenburg at 6:01 PM