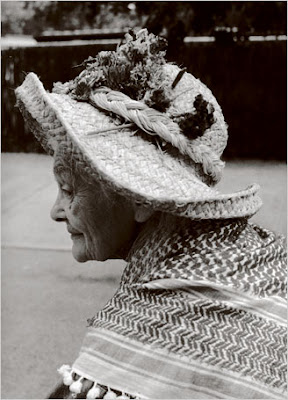 Thanks to Bob, who spotted this item on Karen Hess for me in this week's Sunday New York Times Magazine. (I had looked through the magazine but missed the photo.) This issue of the magazine is composed of obits for important people (at least, according to the Times) who passed away in 2007. I had never heard of Karen Hess, who according to Betty Fussell, author of the piece, was a well-known food activist, contrarian, and food historian. She considered Julia Child a "dithering idiot." And she wore a bonnet and a kufiya. You gotta love her.

She was also a ranting, raving Jew-hater, as those of us who live in the west 90s know. She used to stand in her walker in front of Gourmet garage on Broadway and 97th street trying to distribute pamphlets accusing "international jews" of orchestrating September 11th. I was so pleased by her death I can't tell you! It seemed like she would live forever . . .

Not only is your statement about Karen untrue, but it's incredibly mean spirited and vicious. You should be ashamed of yourself.