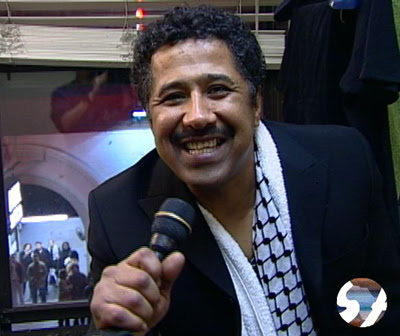 I've been meaning to write about Khaled's kufiya for a long time, and finally found a photo. In winter 2002, shortly after the events of 9/11, music promoter Miles Copeland organized a very successful tour for three Arab artists who recorded for his (now-defunct) label, Mondo Melodia. The tour featured rai star Khaled, Egyptian sha'bi vocalist Hakim, and Palestinian-American 'ud and violin master Simon Shaheen. The tour served as a kind of coming-out party for Arabs in the US, who made up a significant and enthusiastic component of the audience in many locales. In a sense, the concerts represented a public validation for Arab popular culture, in the wake of several months of intimidation hanging over Arabs and Muslims in the wake of 9/11.

At the New York concert, an audience member threw a black-and-white kufiya onstage, and Khaled put it on and wore it for the remainder of the concert. A significant gesture, especially in light of the fact that Khaled is frequently depicted as "apolitical."

Alas, the demise of Mondo Melodia has meant that less Arab pop music is being released in the US...
Posted by Ted Swedenburg at 6:07 PM