Back in June I wrote a couple posts about an imaginary Palestine Benefit Album. (I need to write something on Propagandhi, as suggested in one comment, and hopefully I will soon.) Meanwhile, I recently came across a very cool blog, surplus thought, who turned me on to a new release by Ian Brown (Stone Roses) called "Illegal Attacks," and featuring Sinead O’Connor. The song is really an anti-Iraq war song, but it also includes references to Palestine/Israel.

Here are the Palestine references:

Does not a day go by
Without the Israeli Air Force
Fail to drop it’s bombs from the sky?

And, further along in the song: 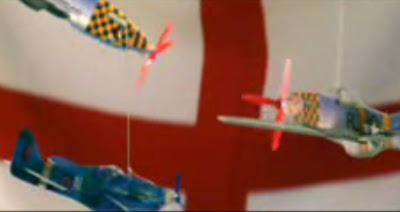 I've not yet listened to the song enough times to decide whether it deserves to be in the imaginary Palestine Benefit Album. But at least it gets an honorary mention. I really like the Sinead O'Connor contributions, especially when she sings: "What mean ya that you beat my people/And grind the faces of the poor."

Go here for the complete lyrics. And the video is pretty decent, and of high quality, since it is posted by Polydor.
Posted by Ted Swedenburg at 7:35 PM

Wow, those lyrics REALLY suck. They are a classic example of doggerel.

As is often the case with songs, the lyrics sound somewhat better when sung than they do when you read them on paper. As I wrote, what Sinead sings actually works. Still not so sure about Ian Brown's words. I'm wondering whether you think that these lyrics do one or all of the following (taking the definition from wikipedia):