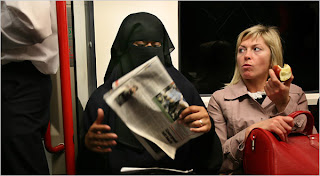 Yep, folks, this is what I'm reading on Christmas morning...Gary Younge's very powerful column in the latest issue of The Nation. Here are a few choice excerpts, but be sure to read the entire piece. As Younge notes, it's not just the hard right in Europe that is making hay out of as well as inciting anti-Arab, anti-Muslim, anti-"Islamofascist" sentiment, but such sentiment is increasingly mainstream, as the comments by Martin Amis (never buy another one of his books!) and Angela Merkel indicate.

But the primary threat to democracy in Europe is not "Islamofascism"--that clunking, thuggish phrase that keeps lashing out in the hope that it will one day strike a meaning--but plain old fascism. The kind whereby mostly white Europeans take to the streets to terrorize minorities in the name of racial, cultural or religious superiority.

For fascism--and the xenophobic, racist and nationalistic elements that are its most vile manifestations--has returned as a mainstream ideology in Europe. Its advocates not only run in elections but win them. They control local councils and sit in parliaments. In Austria, Belgium, Denmark, France and Italy, hard-right nationalist and anti-immigrant parties regularly receive more than 10 percent of the vote. In Norway it is 22 percent; in Switzerland, 29 percent. In Italy and Austria they have been in government; in Switzerland, where the anti-immigrant Swiss People's Party is the largest party, they still are.

In September 2006, British novelist Martin Amis told the Times of London: "There's a definite urge--don't you have it?--to say, 'the Muslim community will have to suffer until it gets its house in order.' What sort of suffering? Not letting them travel. Deportation--further down the road. Curtailing of freedoms. Strip-searching people who look like they're from the Middle East or from Pakistan.... Discriminatory stuff, until it hurts the whole community and they start getting tough with their children."

Far from being the principal purveyors of racial animus in Europe, Muslims are its principal targets. Between 2000 and 2005 officially reported racist violence rose 71 percent in Denmark, 34 percent in France and 21 percent in Ireland. With few governments collecting data on racial crime victims, it has been left to NGOs to record the sharp rise in attacks on Muslims, those believed to be Muslims and Muslim targets.

None of this means anti-Semitism and jihadism don't exist among Muslim communities in Europe. But it does provide a context for both. Muslims are a relatively tiny percentage of European citizens--there is a higher proportion of Asians in Utah than Muslims in Italy--and are overwhelmingly concentrated among the poor. More than 40 percent of Bangladeshi men in Britain under the age of 25 are unemployed. All of this excuses nothing but explains a great deal. According to a Pew Research Center survey, the principal concerns of Muslims in France, Germany and Spain are unemployment and Islamic extremism. Integrating into a society that won't employ you, educate you or house you adequately is no easy feat. Participating in a political culture that scapegoats you is also tough. Attacked as Muslims at home and abroad, they defend themselves as Muslims.

The most potent anti-Semites and bigots in Europe do not live in run-down housing projects but grace the corridors of power. They are not Muslim; they are Christian.

(The photo is from the New York Times.)
Posted by Ted Swedenburg at 10:04 AM

"the most potent anti-Semites and bigots in Europe do not live in run-down housing projects but grace the corridors of power. They are not Muslim; they are Christian."

Muslims, not Christians, are the ones who abduct and torture to death Jews in Paris. That might qualify as anti-semitic violence.

You're referring to the case of Ilan Halimi, a French Jew kidnapped in Paris and found naked and badly burned on February 13, 2006. Halimi died on the way to the hospital. Members of the gang that took him for ransom have been rounded up. Of course this is a horrible anti-Semitic crime, which deserves to be roundly condemned. But note what Younge claims: the most POTENT anti-Semites are in power, and they are anti-Arab anti-Semites. Some of hose who are the biggest victims of anti-Arab, anti-Muslim bigotry and violence have responded with anti-Semitic violence, and that is to be condemned, but it doesn't negate the fact that THEY are the victims. ONE case of kidnapping and torture doesn't change the reality.

"ONE case of kidnapping and torture doesn't change the reality."

CRIF, the umbrella organization of French Jewry, recently commissioned a poll. In it, 3% of French non-Muslims thought the Ilan Halimi murder was justifiable, while 37% of Muslims did. One of the cruelest andmost horrific crimes in recent memory. 37% Nice people , huh?

That statistic is appalling, but it should probably be interpreted as a sign of deepseated alienation rather than inherent "inhumanity."

"More than half of black people in France believe they have been victims of discrimination in everyday life, a new survey suggests." BBC, 31 Jan. 2007. (The leader of the gang that did in Halimi was from the Ivory Coast.)

A series of surveys carried out for official French organisations suggest that France is the most xenophobic of major European countries.

One survey found that 38% of French people described themselves as racist; among European Union countries only Belgium at 45% had a higher figure. (BBC, July 3, 1998.)

I'll never convince "anonymous," but for anyone who wants a short analysis of the "not nice" conditions that foster such feelings, check out "Urban Violence in France" by Paul Silverstein and Chantal Tetreault (http://www.merip.org/mero/interventions/silverstein_tetreault_interv.htm)

I appreciate you addressing my points--it's true that situations n the French suburbs are awful. We have to decide, as humans, whether random cruelty is explainable by social inequality. If it is, a you suggest,life is simpler. Bhuttu's assassination is also an understandable by product of poverty. Jewish anti-Arab bigotry an understandable by product of decades of Arab terror. Etc.

I think Ted is being intellectually dishonest. His assertion, one I throughly reject, is that the worst anti-semites in Europe are Christian, was quite convincingly challenged, if not refuted. His response was to say, "yes, but Muslims live in slums . . ."
That, frankly, is no excuse. It's barely even an observation. Either we are having a factual discussion or we are engaging in emotional masochism.

First, it's *Younge* who claims that the most potent anti-Semites in Europe are Christian. By 'anti-Semites' he really means Islamophobes and anti-Arab racists. I don't really agree with using the terminology anti-Semite to refer to anti-Arab/Muslim bigots, but I do agree with the notion that the real racist threat in Europe emanates not from racists in the ghettos and poor neighborhoods but racists in positions of power. One kidnapping does not 'prove' otherwise. The racism that Muslims and Arabs endure in France in no way excuses or justifies such actions, but such actions equally in no way that those on the receiving end of racism are for the most part Arabs and Muslims in Europe--as argued very convincingly by Younge. I condemn the anti-Semitism that is all too prevalent in some Arab and Muslim circles in Europe, and I condemn the racist violence and structures to which poor and working class Arabs and Muslims are the special victims. And then I look at the evidence, who is most victimized, who's the most underprivileged, who is systematically discriminated against. Again, Younge shows who is specially targeted.